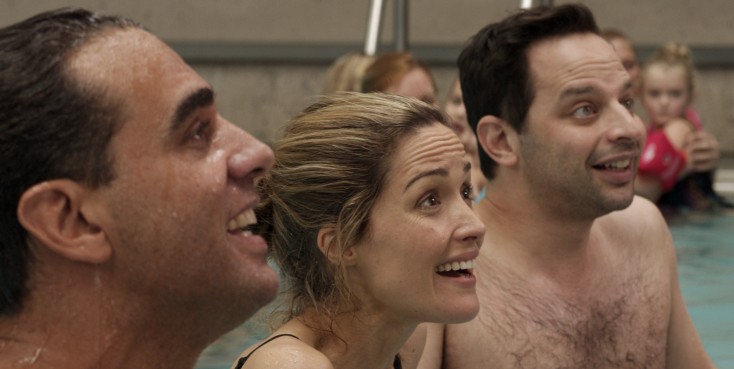 HOLLYWOOD—Busy Aussie actress Rose Byrne has two new films coming out. Both are comedies but are very different, not only budget-wise, but also in tone.

Up first is Ross Katz’s heartfelt comedy “Adult Beginners,” in which she and comedic actor Nick Kroll play estranged siblings who have to get reacquainted when, after a disastrous business venture, he comes to live with her and her family in the suburbs. With no job prospects Kroll’s Jake becomes the nanny to big sis’ 3-year-old son. He also has to navigate living alongside his brother-in-law, Danny, played by Byrne’s real life boyfriend Bobby Cannavale (“Boardwalk Empire”).

The 35-year-old actress also stars in the upcoming big budget action comedy “Spy” alongside her “Bridesmaid” co-star Melissa McCarthy. Dressed in a short-sleeved white blouse, peach-colored skirt and wearing black high heels, the slender actress is a far cry from the frowzy pregnant character she plays onscreen in “Adult Beginners.” Having co-starred recently in the remake of the musical “Annie” with Cannavale and again with him in the upcoming “Spy,” she spoke about the advantages of working with a soul mate.

Q: You’ve worked on a lot of independent films and a lot of mainstream films, what are the biggest challenges for you?

Byrne: The difference between something small like this film and “Spy,” is time. It’s a massive difference. With something like “Spy” you have months and months to do it, and endless resources and things like that. Whereas with a small independent film like “Adult Beginners,” it’s a 22-day shoot, you’re in a tiny space and it’s moving very fast. That’s probably the biggest thing.

Q: How many films have you done now with your boyfriend, Bobby Cannavale?

Q: Is that a coincidence?

Byrne: It really was. In particular with “Adult Beginners,” I read it and loved it. I saw there was the character of Danny and I said this guy’s a lot like Bobby. He could really play it. I found out they had written it for him because (co-writer) Liz Flahive was a showrunner for “Nurse Jackie,” and (Cannavale) was on Season Three of that show. With “Annie,” it was just luck as was “Spy.” Despite our being together, I’m sure we would have had a high chance of working together on these projects anyway. It’s an economic choice as well because it’s one (dressing room) van for the two of us.

Q: Your husband-and-wife characters in “Adult Beginners” have a solid relationship despite his character’s infidelity. Playing a pregnant woman in this, did that add to your performance?

Byrne: I’d never played someone pregnant before and so it was really interesting. It totally changes your physicality, and I spoke to friends who had babies about what it was like being pregnant, just to get a sense of what it was like. So it added a whole other layer, pardon the pun, to my performance. I literally had to strap on the (prosthetic) baby bump. I just tried to make it look authentic. We had to do the cream on the belly. It is tough because the (prosthetic belly) isn’t always well made, so we had to spend a lot of money on a good one, really.

Q: Your character and Nick’s character have to learn from their failures. Is there any particular personal failure you’ve learned from?

Byrne: There have been so many. As an actress, you just get used to it people saying “Noooo!” and dealing with rejection. I’ve never had a complete crisis like Nick’s character loses everything, but I’m sure it’s coming. (She laughs.) But I think every person’s life is a novel. We all have crossroads. We all have these incredible stories that happen to us. That’s what I loved about this film: I could relate to that side of it. I think it’s really well laid out in the script.

Q: The scenes with you in the swimming pool, where your character doesn’t know how to swim, are very realistic. You look like a deer in headlights.

Byrne: Oh good! That water was freezing; it was so cold. The heater was broken in the pool so it was really cold. We really didn’t want to be in the water. (She laughs.) Jane Krakowski (who plays the swim instructor) was such a trouper as were all those little kids.

Q: How did you create chemistry with Nick as your brother?

Byrne: We bonded quickly coming from big families, being the youngest of families. I’m the youngest of four and so is he. That was a real connect we had in talking about our relationships with our siblings and how they reflected parts of the script and the story. It was fun for me to play the older sibling because I’m the youngest of my family in real life. So I just had to tap into my older siblings (behavior), not to throw them under the bus, but I think I really did do that. Nick was very generous. We spent time with his family at his house, which was near where we were shooting. We had some good dialogue before we started so we both knew where we were coming from.

We didn’t want to make Justine the nagging sister because that would have been dull and predictable. We just wanted to break that convention and show that she’s going through her own (crisis). She’s acting out as much as everybody else in the film. I’m interested to see the reaction of the audience to that to this pregnant lady who’s pretty irresponsible a lot of the time.

Q: Despite her pregnancy, she’s drinking and smoking…

Q: Did you learn any babysitting tips?

Byrne: Those twins who shared the role of my child were pretty cool. They were good kids. There were these identical twin boys. They look exactly the same. We were very lucky.

Q: How did you and Nick get along?

Byrne: The script is so well written. It’s such great dialogue and character that really from that first reading so my job was really not to screw it up too much. Nick and I both come from big families. I’m one four; he’s one of four. I have a lot of nephews and nieces and so does he. So we bonded very quickly. We had a good rapport. It was all there on the page—that tension and those complicated relationships that we have with our families. There are endlessly good stories that I enjoy seeing, anyway.

Q: It was interesting to see how Justine and Danny deal with his infidelity. Usually the husband tries to cover it up but he acknowledges what he’s done and wants to work it out with her.

Byrne: I really thought that was interesting: this idea of forgiveness, which happens all the time in life with people. And that was something that was dealt with in the film. Also, Justine appears to be so put together with the house and the husband and the kids and yet her family is really totally dysfunctional as well as her brother. So it’s like the title of the film, you just sort of develop these charades around growing up, but it’s just a charade. It’s like that book, “We need to talk about Kevin.” There’s a great chapter in that where she’s describing the face of being an adult. That always resonated with me, that novel, and it’s sort of similar thematic-wise, that as you grow older, you just kind of reign in behavior, but it’s sort of a charade.

Byrne: It’s like drama except that you have to try and get a laugh. It’s harder, I think. The stakes always have to be something that’s high when it’s funny. Otherwise, people don’t have any sort of desperation, and with desperation comes a lot of comic possibilities, which I love to explore. This is a much more gentler comedy than “Get Him to the Greek,” “Bridesmaids” or “Spy,” which are far more R-rated comedies.

Byrne: Oh, it was so fun. It was a great villainous role. She’s just completely duplicitous and kind of a psychopath, really. (My character) Raina doesn’t care about what anyone thinks of her or what anybody says, which is kind of close to me. (She laughs.) I think he based it on me.

Q: You get to work again with Melissa?

Byrne: Yes, I’m very lucky. Working again with Melissa is incredible and so is working with (director) Paul Feig. There’s a great cast of plenty so it’s been fun. I haven’t done this sort of film for a while. It’s a big action spy film and it’s really a fun role.

Q: Did they do a lot of audience test screenings for “Spy?”

Byrne: The first time I saw it was at SXSW. I know they do a lot of test screenings on those comedies. It’s really a science what they do with those reactions.