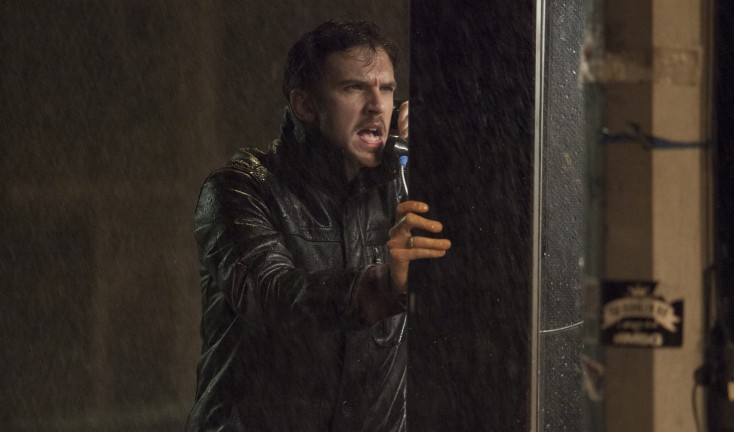 HOLLYWOOD—For “Downton Abbey” fans, Dan Stevens is, and always will be, the handsome early 20th century heir Matthew Crawley, who tragically died behind the wheel of a car on the way home from seeing his wife and new baby.

But Stevens, the actor, has moved on from the popular British TV series. Set to turn 32 on Oct. 10, the blonde, blue-eyed actor has been reborn as a film star. While some may have questioned the risks of leaving a hit TV series for the unknown, Stevens appears to have landed on his feet. Following a successful turn on Broadway, he has followed up with roles in several feature films, including two releases due out this week: the Universal Pictures crime drama “A Walk Among the Tombstones,” and the Picturehouse thriller “The Guest.”

Stevens is nearly unrecognizable as Kenny Kristo, an American drug trafficker in “Tombstones,” which is based on one of Lawrence Block’s bestselling novels. He co-stars with Liam Neeson who plays an ex-alcoholic P.I., whom Kenny hires when his wife is kidnapped. Fear, anger, helplessness—Stevens’ conveys the hapless felon’s range of emotions mostly through body language.

In “The Guest,” also arriving in theaters Friday, he plays a mysterious houseguest who may or may not be the close friend of a fallen soldier.

Married to jazz singer Susie Harriet, Stevens has two children, Willow, 5 and Aubrey, 2. He recently spoke of his transition from TV heartthrob to workhorse film actor.

Q: You seem to have been on a tear since you left “Downton.” Can you talk about the chronology of what you’ve done?

Stevens: Post-“Downton,” I guess the first step was doing “The Heiress” on Broadway. When I made the decision to leave “Downton, I didn’t know what was coming next. The option was to do some theater in New York, and I had done a lot of theater in London. While I was doing “The Heiress,” Scott Frank, who directed “A Walk Among The Tombstones,” came and saw it. He was actively looking for someone unexpected to play Kenny, a drug trafficker, who didn’t want to go to whoever that go-to guy might be, and I was actively looking to do some different things. He literally sat in front of me, and said, “I’ve never seen you do something like this before, and I’d like to see you try.” For a young actor, that’s about the most exciting thing that anyone can say to you, really. It’s just opening a door to step through and try new things. With “Walk Among The Tombstones,” I was very excited to explore something totally different, and that was an interesting challenge.

Stevens: Yes, that experience with Scott gave me the confidence to go and sit in front of Adam Wingard, who directed “The Guest,” and say, “I’m not your first choice for this, but I find the movie hilarious. I loved “You’re Next.” We shared a sense of humor, but also shared the same kind of movies, growing up. We were steeped in the same kind of cinematic vocabulary. So there’s a great shorthand and similarly, I’d grown up loving those ‘70s noir-ish thrillers including “Dirty Harry” and ‘The Conversation.” That kind of told me what he was hoping to achieve.

Q: How did you prepare for the “A Walk Among the Tombstones?” You were almost unrecognizable in it.

Stevens: Thank you. I’m pleased you didn’t recognize me. That’s sort of the point. The last past couple of years for me, really, there have been a number of physical transformations, in that aspect, that I haven’t really been able to embrace before. It’s something that’s afforded me a lot more in film. You get the time to drop the weight, to bulk up, and so I think I lost about 30 pounds to play Kenny in “Tombstones,” and then about 25 (pounds) back on, to play David in “The Guest.” And then I went and put on 50 pounds of armor to go and play Lancelot in “A Night At The Museum” (Secret of the Tomb sequel). So there were a number of quite physical challenges, this year. It’s been really fun for me to sort of surprise people a little bit and show up in some different places.

Q: Gaining and losing weight for your roles, did you work with a trainer?

Stevens: Certainly for “The Guest,” I worked very closely with a trainer, and yeah, I’m in a nutritional program, and all the rest. It’s pretty intense. The physical preparation was a great part of the preparation for that film. I was just pushing myself to some insane lengths that I just haven’t really had the opportunities to do before. It puts you in a different frame of mind. I was encouraged to keep going, push through those boundaries and see what happens. It’s very rewarding, seeing the physical transformation like that.

Q: Your drug dealer character’s grieving, and you express his jumble of emotions in your face and body language. Was that spelled out in the script?

Stevens: That’s interesting. I suppose the first thing I should say is he’s a drug trafficker, not a drug dealer, which is an interesting distinction, because within the underworld it’s kind of a different status. He’s clearly doing OK for himself, living in that mansion in Fort Greene (in Brooklyn). He’s made a series of life choices that ended him up in this situation. What happened to his wife is ultimately linked to his career choice. This is a man who’s facing up to those consequences. That’s quite a dark place to be, to sort of confront those consequences in this irreversible situation. It becomes, for Kenny, a classic revenge trajectory. He sees it to the bitter end. At a certain point, he leaves the path that Liam is on. Liam’s role is a bit more of the redemptive part, but he also has made a number of bad choices in his life and is confronting those, in his own way, as is Boyd Holbrook’s character Peter, my brother. All of these characters are sort of mixing in their poor choices, which sort of ferments into this sort of underbelly of Brooklyn.

Q: Usually, in crime dramas, the victim is a regular guy, an everyday man. Yet, you are playing a character that could have been the villain in any other movie, but here he’s a victim. What was the difference between playing a bad guy who’s a victim and an ordinary victim?

Stevens: That was one of the really interesting things that Scott wanted to explore with this. When bad things happen to bad people. How does that make us feel? What happens to Kenny is deeply unpleasant, and I wouldn’t wish it on anybody. The challenge was to evoke some kind of sympathy for a character whom you would normally say, “Oh, this is the bad guy,” and dismiss. To walk those sensibilities a little bit, was really quite a bit of a challenge in the film.

Q: You’ve now worked with Liam Neeson on this, Ben Stiller in the “Night at the Museum: Secret of the Tomb” and John Travolta in “Criminal Activities?” Is it surreal for you to be working with these screen legends?

Stevens: At times, for sure. It’s been an amazing year, just in terms of working with my childhood heroes, really: Liam Neeson, Ben Stiller, John Travolta, and Adam Sandler in “The Cobbler.” It really is quite surreal. What’s really exciting for me is just seeing how these guys work, especially on “Tombstones,” Liam just leads a great set. He takes it very seriously. He’s a total pro. He shows up, very cool, gets the job done, but also, I like his way of working. He has a lightness off-camera that keeps everyone in the right place. It’s a very dark film, and I think for people to inhabit that, the whole time could be a lot tougher than it was.

Q: You moved from London to Brooklyn. How do you balance your personal life with this busy work schedule now? Playing these dark characters—do you bring them home from set?

Stevens: Family’s hugely important to me. Having kids is the best possible way to shake off the darkness of any possible role you might be playing. You step in that door and everything melts away very quickly, which is a good thing. I’m enjoying exploring all manner of roles, traveling all over the country, seeing a lot more of the United States than I ever dreamed. I’ve been taking them with me, sometimes, which is cool. Showing the kids all different areas is great.

Tags:A Walk Among the Tombstones, Dan Stevens, Liam Neeson, Scott Frank, The Guest
Previous PostGilliam Revisits Meaning Of Life With Zero Theorem
Next PostFrom the ‘Abbey’ to the ‘Tombstones,’ Dan Stevens Has Moved On – 3 Photos