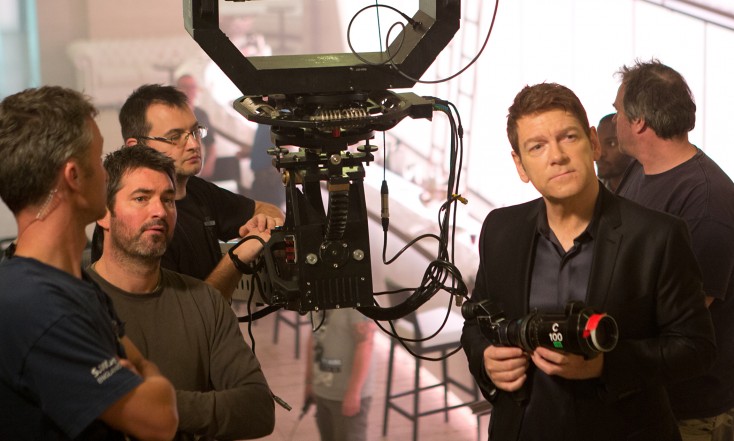 HOLLYWOOD—Kenneth Branagh is near the end of a long day of interviews talking up his new movie “Jack Ryan: Shadow Recruit,” but the veteran thespian and filmmaker has no complaints.

“This is such a tiny moment and such a narrow window of opportunity to have an audience that it’s not a hardship,” he assures, sitting in a cozy suite at a Beverly Hills hotel. “I’m delighted that people are interested in talking about the film.”

The 53-year-old filmmaker can remember a time when he struggled to get attention for his movies, even traveling to small towns and college newspapers to get the word out.

Best known for bringing some of the Bard’s greatest classics to the big screen, Branagh makes his foray into the espionage thriller genre with this origins story that follows a CIA recruit from Wall Street to Moscow.

Branagh first came onboard as the director of the action-packed spy movie, which centers on a young financial genius and military hero who is recruited by the CIA to protect America’s interests. The character is based on Tom Clancy’s long-running fictional spy hero, which has been the basis for three other Hollywood movies over the past three decades.

“Jack Ryan: Shadow Recruit” isn’t based on a specific Clancy novel, but draws details from many of his yarns to tell an origins story.

Chris Pine, of “Star Trek” fame, already was on board with the project to play the cerebral spy when Branagh was tapped to direct. A few months after coming on board as director, the filmmaker also agreed to play the film’s villain, Viktor Cherevin, a powerful Russian banker on a mission to bring down the American financial system. It’s up to Jack Ryan and his handler Agent Harper (Kevin Costner) to stop him.

Q: I can only imagine how long a day you’ve had. You must be exhausted.

Branagh: Not really. I’m delighted people are interested in talking about the film, which I’ve been working on for two years. I’ve been on the other side where you asking people to talk about your film and no one’s interested in seeing it. I remember getting on an airplane in 1989 (promoting “Henry V”) and going around this great country of yours. I remember going to Detroit and meeting with the college press and saying, “What do you want to know?” You really had to bang the drum, especially with an independent film.

Q: Were you cast as an actor and then as the director?

Branagh: I came on board as the director first. I think it had been in development for about five years. The (producers) knew they had something in a character that clearly had success in four pictures. That was no accident. Tom Clancy’s work was ubiquitous around the world, in bookstores and airports. But (the producers) couldn’t quite crack it for the modern world. With films in that kind of state they need to shift the dial, so in my case, it was just a matter of reading it and being gripped by it.

Q: What struck you about the script?

Branagh: It really was a precious moment. I was sitting in my study at home. It was mid to late afternoon. I read it in one sitting and knew I wanted to do it. I enjoyed it. My first impression is the first thing to hang onto because a year later, you’re standing on a street corner in Moscow and thinking, what was it about it that I loved when I was reading it that afternoon in my study? You need to have that to sustain you. So it was as the director that I became involved and then I was asked if I’d play the Cherevin part. I said, “Let’s just do this stage by stage. Let’s meet everybody first and see.” I wanted to meet with them individually. I didn’t want to sit with a dozen people around a table. I gathered everybody’s notes and then sat in a room with David (Koepp, the screenwriter). When we moved it on a little bit and developed the character of Harper, we were able to cast Kevin (Costner). We did the same with Kathy, and were able to cast Keira (Knightley). When we got to that stage, we had made several changes to Cherevin. By that stage, I thought, “Oh, this is a great part!” As a director, I helped it move into an area where I think it’s something that would be great to play, and I’d love to play it.

Q: Did you get a chance to speak with Tom Clancy (who died in October)?

Branagh: No. It was a long time for the arrangements with the deal with the Clancy group and then the estate. But I have the sense they wanted it. They were happy to be at arm’s length. They were happy with the personnel involved and believed we were respectful of the writer and the origins and a desire to do good work. Maybe the idea that it was an original piece helped. I don’t know what his thoughts were on what Hollywood did to his previous work or if he felt one of his novels had been mutilated, maybe there was not that concern with an original piece.

Q: I read Clancy had some concern about the “tweedy” look Harrison Ford brought to the character in his depiction of Jack Ryan in “Patriot Games” and “Clear and Present Danger.”

Branagh: Oh right. I don’t know about the specifics of that. When we were putting this together, there’s a great compendium book, a very thick book, which gathers all the detailed biographical information with all the characters in it from the Clancy universe. There’s a ton of that stuff. Kathy’s brilliant at dealing cards and what Jack lectures in at Annapolis. So I think Clancy is an invitation to find that tweed jacket or do those character quirks. We certainly enjoyed trying to find them.

Q: Former ballet star Mikhail Baryshnikov plays a mysterious oligarch in this. Can you talk about casting him?

Branagh: I’ve loved his acting in the past and I’ve loved his acting as a dancer. I find him a totally magnetic and riveting figure across the years. I find his face absolutely incredible and, of course, that body is amazing. I went to see him in a play the year before last here in L.A. called “In Paris.” It was quite abstract. It was an acting role but sort of impressionistic. It was a fantastic piece of theatricality because it was about what was happening but at the same time it was about everything else he had ever done. So when it came to this small part, it seemed like a natural choice to at least ask him. And he was old-fashioned, chivalrous and punctual. We discussed it in detail as small a part as it was. I rehearsed with him almost more than any other actor I’ve worked with. He wanted to rehearse and rehearse and rehearse—such is the dancer’s technique. But it was a glorious thing to do because I found it enchanting company, and he was a total prince.

Branagh: Yeah, this fall. The plan is there are two more books we haven’t adapted yet in this series. There were Swedish versions of the books and then the original Swedish teleplays. “The White Lioness” which is a book set in South Africa partly is one of the ones we will do. Also, in two parts, we’ll do “The Troubled Man,” which is the last “Wallander” novel, or what (author) Henning Mankell has said is the last Wallander novel. I don’t know if you’re read it, but if you thought the others were bleak, this is really dark.

Q: Jack Ryan has a mentor in Agent Harper. Who was your mentor?

Branagh: His name was Hugh Cruttwell (a drama teacher and principal at the Royal Academy of Dramatic Arts). “Cruttwell” was an interesting name because it was the name Evelyn Waugh used to mock the characters that he disliked. He always gave them the second name “Cruttwell.” But he was a wonderful man. When I did my second picture, called “Dead Again,” Hugh came to America to be the acting coach on it. He was such an amazing guy to have around. He knew everybody. He carried this rather (goes into very proper English tone) this scholarly, very hawkish, English thing, very proper. So, seeing him around the craft services table amongst an American crew, was a delight every morning. I remember after I went to a drama school audition, he rang up. At that stage, the idea of me having a career in acting was so thrilling and exotic. I knew it was what I wanted but it seemed so far away. I went in there and saw the names on the wall, and I was just like a kid in a candy shop. He said to me, “You’re a performer. You’re not an actor at all. You’re an impressive show off but I don’t want show offs.” So he always had this bracing directness but you felt as though he appreciated you.

Q: Your directed “Cinderella,” starring Lily James, who’s on “Downton Abbey.” What’s the status of that?

Branagh: I finished shooting the movie before Christmas. I’m editing it right now. Currently, it’s slated for release in March 2015. It was a hugely enjoyable movie to make. It was interesting to work on a story that surprised me. The Cinderella story is permanently lodged on a primitive level of what we enjoy in our stories. Somehow, we’re all in there wanting to be that underdog and understand that goodness can triumph. If not a prince, something will come such as enlightenment or self-realization. It means that you can be happy and cruelty can be overcome. I found it sort of an emotional film to make. I enjoyed it immensely.