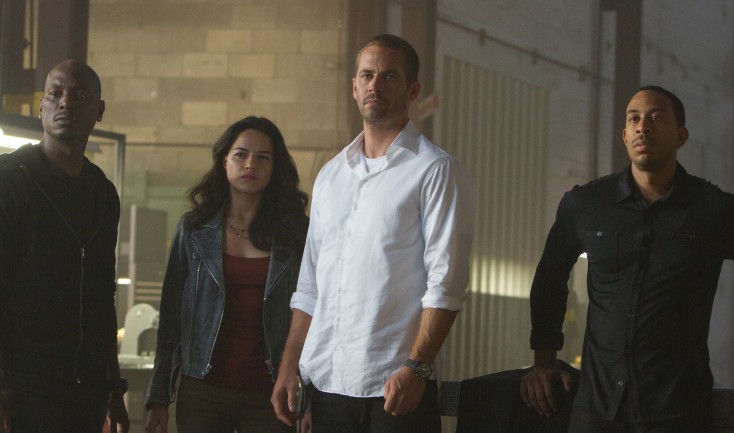 HOLLYWOOD—James Wan has made a name for himself in Hollywood as the go-to director for modern horror films. Already, the Australian filmmaker counts the original “Saw,” “Dead Silence, Death Sentence,” “The Conjuring” and two “Insidious” films under his belt.

So it was somewhat of a surprise when it was announced in 2013 that the youthful looking filmmaker would take over the helm of the wildly successful “Fast and Furious” franchise for the seventh installment , after previous helmer Justin Lin determined four sequels was enough.

Wan, 38, sees it as a natural transition for him, as he has tried to distinguish his graphic horror films by delivering interesting characters and story arcs that audiences care about as well as buckets of blood.

With a large and beloved returning main cast (Vin Diesel, Paul Walker, Michelle Rodriguez, Tyrese Gibson, Chris “Ludacris” Bridges and Jordana Brewster) as well as a handful of new characters (Jason Statham, Kurt Russell , Djimon Hounsou and MMA fighter Ronda Rousey as well as Dwayne “The Rock” Johnson, who has an expanded role as a CIA agent Luke Hobbs that he debuted in “Fast & Furious 6.”).

Of course, Wan faced the herculean task of keeping the show going after the tragic death of Walker midway through production. Not only was it an emotional blow for everyone on the cast and crew (along with legions of fans), but there was concern over how to finish the film with the scenes the 40-year-old actor hadn’t shot. After a few months and some reworking of the script (and adding Walker’s two brothers as stand ins), production resumed and a sensitive tribute to the actor that made sense within the franchise’s storyline was added.

This story picks up with Dominic Toretto (Diesel), Brian O’Conner (Walker) and the rest of the crew back in  the U.S. ready to resume normal lives after defeating bad guy Owen Shaw (Luke Evans) and his crew. But then Owen’s older brother, Deckard Shaw (Statham) comes after Toretto & Co., intent on seeking revenge against the people who put his brother in the hospital with serious injuries, which puts the entire crew in danger again. When one of their friends is killed and another seriously injured, Dominic & Co. set out to administer some justice of their own. As with previous installments, the crew heads to different parts of the world and gets to do some fancy driving as they face off against more than one kind of Big Brother.

With an infectious tone of enthusiasm, Wan recently spoke by phone about coping with the loss of one of the film’s most beloved stars as well as making an exciting action movie that both honors Walker and gives audiences the exciting ride that they’ve come to expect from the “Fast and Furious” franchise.

Q: The stunts in this are out of this world. Did you come up with these scenarios with Chris Morgan (the screenwriter) or was it already in the script?

Wan: The cars being parachuted out of the plane was already established by the time I got onboard. It became my job to execute it and make it as thrilling as I possibly could. When I first came onboard, I was fully aware of how outrageous it was. But it’s “Furious 7,” and so you have to take it one step further than what the previous movies have done.

Q: The sequence where Paul Walker’s character has to make the big leap from the bus falling over the edge of the cliff was spectacular. Can you talk about shooting that?

Wan: It is cool. That set piece actually was the first one I designed when I became attached to this film. The script and the story was still being worked on but I already knew that that section was going to exist so I just jumped straight into it. We just went for broke. The thing I wanted to bring to it from my horror background was a sense of tension and a sense of suspense. That set piece is one that really showcased what I wanted to do with this movie.

Q: The idea of this God’s eye technology allowing zero in on anyone in the world in seconds is actually in the realm of possibility. Is it fun to have shot something a year and a half ago that is now becoming reality?

Wan: Yeah, we wanted to design a MacGuffin that was realistic. A tracking device like this is actually out there. I guarantee you that Big Brother is watching us all the time. It’s a very relevant issue, and so we wanted to bring to the film a context in the world we live in. These days, with all the cell phones we use, with all the computers, with all the technology, all the social media platforms, all that stuff. We’re constantly connected so it makes it very hard for us to be off the grid. So we wanted to play around a bit with that sort of paranoia, and so that became the main MacGuffin for the rest of the movie.

Q: These “Fast and Furious” films have ventured to other parts of the world as does “Furious 7,” but you don’t spend much time in Asia this time around.

Wan: I actually wondered if we could bring it to Australia since I’m from Australia. But I came onto (the film) a bit late so we already knew where the production was going to take place. The UAE (United Arab Emirates) was already locked so we went along with that. I knew that the characters would be hopping around the world, but I knew I wanted the movie to open in Los Angeles and end in Los Angeles. That was very important because that’s where the story started and it was the right thing to do as well. Especially with our farewell to Paul, we wanted to bring it back home.

Q: It was a tremendous loss for everyone in the cast and crew when Paul was killed in an accident. What was involved in the rewriting or reediting of the film? Did you have to change it a lot?

Wan: Clearly, the ending of the movie is designed to have the proper sendoff for Paul. Obviously, that is something we needed to share. We wanted to do it in such a way that was organic to the movie. What we did was go back and looked at what we had shot (before Paul’s death) and we slowly layered what happens into the conclusion. The key was to try to make it as elegant as possible.

Q: In addition to the action, the film has a lot of heart to it.

Wan: Thanks. And it has a romantic aspect as well, with Michelle’s character and Vin’s character. I think that’s an important element to have in these films. That’s what attracted me to this film in the first place. I wanted to not only show the action stuff but I also wanted to have the emotional and sentimental stuff. I’m a very sentimental filmmaker. I think it shows in a lot of the films I’ve done, and this movie really allowed me to go the extra step and give it the heart that it needed. Especially since it’s Number 7 (in the franchise), you want people to connect with the characters.

Q: You introduce a lot of new characters in this one with some great actors like Jason Statham, Djimon Hounsou and Kurt Russell and Ronda Rousey, and everyone gets sufficient screen time. Was it a challenge to be able to balance the existing characters story development with the new characters?

Wan: Juggling an ensemble is not the easiest thing to do but it’s doable. As long as you know where and when to do it, that’s the key. The chance to work with Kurt Russell was really exciting. The guy’s a living legend; I grew up on his movies. To get him to be a part of this movie, for me, was a big win.

Working with Jason Statham was really exciting too because he’s new to the franchise, and like me, he’s the new kid on the block, and that allowed me to kind of create his character with him from scratch. He wasn’t an established character already. Having said that, when I first met Vin, it was such a great experience because we would talk about his character and where it could go. That’s what I love about him. He can put his filmmaking cap on and not only think about what he’s going to do with his character, but also looking at the world of “Fast and Furious” and what could happen with all the characters. So that was a great collaborative experience I had with him.

Q: Franchises have become synonymous with Hollywood. The “Fast and Furious” franchise is on Number 7, and there aren’t that many franchises aside from the Bond films, Star Trek and a few others that have gone on that far. Why do you think this is such an enduring franchise? Would you be up for another one?

Wan: I think it’s enduring because audiences love the characters. Of course, they also love the action. But people feel like they can relate to these characters. That’s very important. I feel like if I can get you to relate to my characters on an emotional and human level, then I can put these characters in outrageous and outlandish situations and you’ll go along with it because you connect with them. Whether it’s in the horror movie genre or in an action film, if you like the people, then you will go on the journey that they take. I think this is a testament to how much the people love the actors playing these characters, and I feel really fortunate to have been a part of it.

Q: Would you be up for directing another one?

Wan: I’m totally open to anything. It’s at very early stages at this point. I’m doing “The Conjuring 2,” but who knows what happens after that.

Q: It was announced recently that Chris Morgan, your writer on this, optioned the comic book “Chrononauts.” Have you talked to him about this? Would that be something you’d be interested in directing?

Wan: I don’t know what that is but I loved working with Chris and would love to find future projects to work on with him as well.