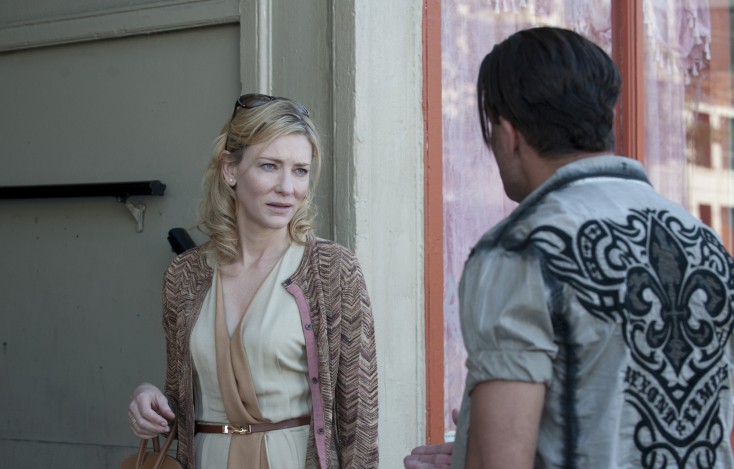 HOLLYWOOD—Academy Award-winning actress Cate Blanchett (“The Aviator”) plays a former New York socialite who has fallen on hard times in Woody Allen’s dramedy “Blue Jasmine.” The juicy role, in which the Australian actress plays the title character Jasmine French, is one she felt she really could sink her teeth into.

A mother of three—Blanchett is married to playwright-screenwriter Andrew Upton—she says it was fun going on Jasmine’s tragic journey. She reveals that contrary to popular belief about the notoriously laconic filmmaker, Allen gave her very specific directions and responded to questions she had about her enigmatic character.

The story revolves around the Park Avenue socialite moving in with her blue collar divorced sister in a cramped San Francisco apartment while trying to figure out what to do with this rest of her life after her estranged Wall Street investor husband (played by Alec Baldwin) commits suicide in prison. With no marketable job skills, Jasmine takes an office job in hopes of earning enough money to pay for schooling to become an interior decorator. Her circumstances start to improve when she meets a well-to-do new suitor (Peter Sarsgaard) with political aspirations, but her past and her increasingly fragile mental state threaten to derail her chances of getting back on her feet.

The 44-year-old beauty says she’s always wanted to be in a Woody Allen movie but had all but given up on that dream when she got a call out the blue. It didn’t take her long to say yes.

Q: What in particular attracted you to the role, and how much direction did you get from Woody in terms of character direction?

Blanchett: When you get Woody’s call, you take it. You’ve already said yes before you know what it is. And you just hope it’s a good one, which of course, these films are never less than fascinating. But I’d given up hope of ever working with him. I just thought he wasn’t interested. The minute I read the script, I knew it was fantastic. It’s impeccably structured. It’s absurd and tragic, often simultaneously. I had heard that he was monosyllabic, at best in relation to the direction that he gave actors, but I found, if I asked him questions, he responded if he thought the questions were interesting. If he didn’t, he just waved me off and went back to his Blackberry.

Q: What do you think Woody’s take was on Jasmine?

Blanchett: He really despised and revered Jasmine, and yet he also was fascinated by her. When you think about all those extraordinary female characters he’s drawn with such wonderful actresses over the years, (it’s apparent) he’s fascinated and loves women, their exuberance and their intelligence, their fears and phobias. There’s a great line that he draws as a dramatist. So a lot of the directing was in the script, but he was very forthcoming. I would say to him, “How would you do it, Mr. Allen?” And he would say, “Well, if I was playing the part…” at which point he got quite Blanche DuBois-like. I said to him, “You know, you should have played this role. Did you consider it?’” He thought about it for a minute and said, “No. It would have been too comic.” I could have easily imagined him as this character. That’s a movie I’d go and see.

Q: How do you approach a project or a role, and specifically this project?

Blanchett: I don’t have a particular process. The material, the director, the other actors, reveals what you need to do. Woody was very much about it being alive. He wasn’t interested in anyone’s homework. Sally (Hawkins, who plays Jasmine’s sister Ginger) and I were the only two people that got the full script. We talked a lot about the back-story and how that can inform the subtext. It was a fascinating thing to play different aspects of Jasmine with different people. She was an entirely different person with each one.

Q: The person I thought about while watching your performance was Mrs. Bernie Madoff. Did you do some research on her or other women that have been socialites and have fallen on hard times?

Blanchett: There are a lot of people who’ve fallen from grace. (Doing the research is) part of my job and part of the pleasure of my job. I followed the Madoff scandal like everybody. I mean there’s a whole other miniseries in that fiasco. That wasn’t what Woody wanted. He didn’t specifically base (“Blue Jasmine”) on that. So it wasn’t her story. It was many, many stories like that. I thought about a lot characters both fictional and real, and then you have to play Woody’s script because the characters are so beautifully, particularly drawn in the writing. The majority of his directing happens in the script.

Q: What about preparing to play someone who is suffering from mental illness? Did you do any special research for that?

Blanchett: I’m not so method that I went and took Xanax every night, but it’s amazing the things you find on YouTube. It was important for me to chart through when she’d taken a Xanax and how many she’d taken, if she’d mixed it with alcohol, and what the physical and mental effects would be. What I was trying to convey was just that sense that when she was beginning to have a panic attack was when she might break out in a sweat, but yet everything else was completely fine. So her physical state and her psychological state were kind of interesting balls to try and juggle.

Q: Since wardrobe is such a big part of a New York socialite’s life, how much did yours affect your performance?

Blanchett: Suzy Benzinger, the costume designer who’s worked with Woody a lot, was extraordinarily inventive and called in a lot of favors from Chanel, Carolina Herrera and Oscar de la Renta. It was great charting through Jasmine’s recycling of her wardrobe and what she brought with her. We could chart her unraveling and the change in her financial situation through that visual.

Q: Did you get to keep any of the wardrobe?

Blanchett: No, it all had to be returned at midnight. (She chuckles.)

Q: You spoke about what Woody does with his female characters. How do you think Jasmine compares or ranks among the protagonists from his other movies?

Blanchett: I’m not even going to go into the ranking thing. I would be right at the bottom. The tone of his films is often so different. I feel privileged to be playing the title role in a Woody film. When you think about him and “Annie Hall” and everything Dianne Wiest does, Judy Davis—they’re brilliant. And Scarlett (Johannson) and Penelope (Cruz)—they’ve all been part of his collaboration to create fascinating, unique shape-shifting, mind-bending characters. He’s influenced the popular culture in ways that we can’t even know. It’s so deep.

Q: Your character is cripplingly flawed, but don’t you feel you have to find something you like in the character?

Blanchett: No. I don’t think you have to like your character. It’s not for me to like them or dislike them. That way lies sentimentality. Particularly with a character like Jasmine, a lot of what she does is really unpalatable, but you hope that the audience will have a sense of understanding. If you know why someone is doing what they’re doing, why they’re behaving the way they are, then that’s your job to reveal that. Often that’s situational. The storytelling does that, and then some of it’s your job as an actor to kind of make that subtext come to life. So it’s important to be compassionate, but I don’t think you necessarily have to like or dislike them.

Q: Have you seen actors struggling desperately to maintain what they have? Have you witnessed incidents of that firsthand when they feel it all slipping away?

Blanchett: I don’t think it happens in just this profession. I think it’s happening all over America, all over the world, that people’s sense of self has been bound up, A, in a relationship, or B, in their financial status, their social circle. When all that’s ripped away, they’re the building blocks of our identity. So you have to often, in mid-life, look at yourself and say, “Who the **** am I?” If you don’t have financial security, and you don’t have a support structure, then madness can pretty quickly set in. Jasmine doesn’t have any of those things at the end.

Q: Your character is very emotional in this. Were you able to turn off Jasmine when you went home after leaving the set each day?

Blanchett: Yes. Well, my children were there with me. They’re not interested whether I’m playing Blanche DuBois or Jasmine French or Richard II. They just want me to do their homework and play with them and feed them. I find that a great leveler. It means you have to switch off. I loved (filming in) San Francisco. I could live there in a heartbeat, but I was quite glad to leave, get my coverage done and go to New York because it was quite intense there. There was so much to do, so many lines to learn, so many situations to unravel, and so I had to just keep moving forward. But it’s probably more a question my husband could answer.