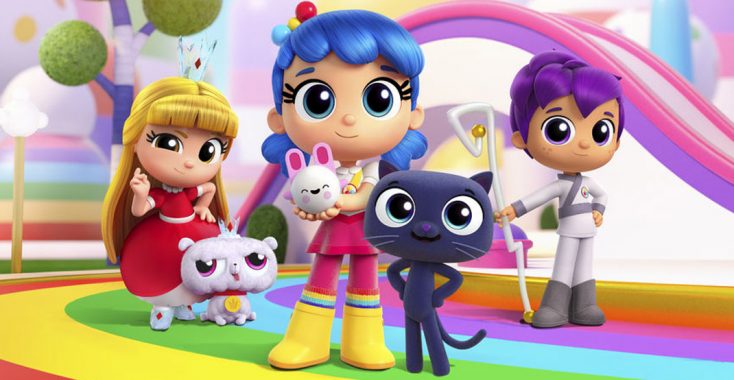 (l-r) Pharrell Williams is joined by co-creator Arturo Sandoval and executive producer Frank Falcone on the August 10 red carpet at the premiere of the Netflix animated series TRUE AND THE RAINBOW KINGDOM. ©FRW/PRV CR: Peterson Gonzaga.

HOLLYWOOD—It was a fun-filled Thursday morning as executive producer Pharrell Williams was joined by his producing partners, celebrity guests and their children for the premiere screening of his animated series “True And The Rainbow Kingdom” at The Grove in Los Angeles.

“True And The Rainbow Kingdom” is a children’s series on Netflix that takes viewers into the world of 8-year-old True and her best friend Bartleby The Cat in the kingdom of Rainbow. True, voiced by Michela Luci ,is the only person who can unlock the powerful magic of The Wishes from the Wishing Tree in order to resolve problems in the kingdom.

Co-creator of the series Samuel Borkson added, “It started with our idea of trying to bring something very important to the world in teaching compassion, which is the seed that makes the whole show.”

Celebrity guest Christina Milian, who brought her daughter, said they were  both excited about the new show. “Anything that is light and fun and I have a niece too. Anything that brings them together and sit there and watch TV together for a while moms are cooking, is great and it’s Netflix,” she said.

“Riverdale” cast member Skeet Ulrich said he’s always happy to come out to family premieres like the one for “True,” which he sayid is unusual in Hollywood. “It’s always nice to bring the little ones to events like this to show them what people are creating for them,” he said.

“True And The Rainbow Kingdom” is streaming now on Netflix with 10 episodes available for its inaugural season.