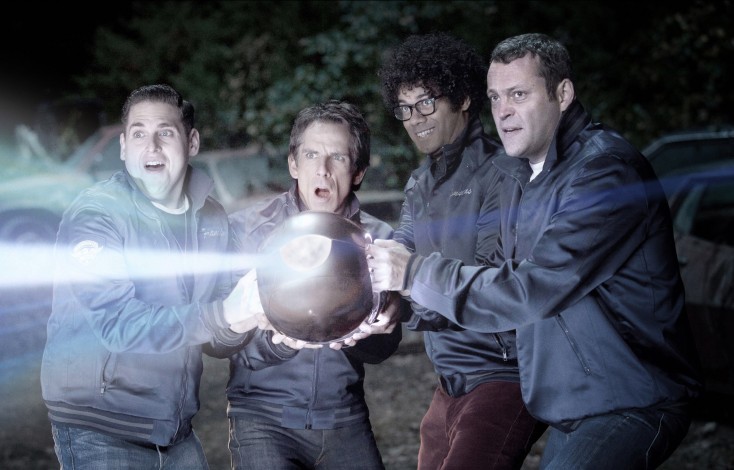 “The Watch” turns out to be less than the sum of its slowly moving parts. Ben Stiller, Vince Vaughn and Jonah Hill bring enough star power to this suburban sci-fi silliness that it should have been a comedy Rolex. Instead, the relatively unknown Richard Ayoade is the most amusing cast member in what turns out to be a frustratingly flat farce.

Stiller is Evan Troutwig, a cheerfully square husband and Costco manager who organizes a neighborhood watch group after a security guard is killed in mysterious circumstances. So much of the movie features the store’s signage and interiors that the company should have gotten above-the-title billing.

Only three people in town respond to Evan’s flyers. Bob (Vaughn), a suburban-dad motormouth more interested in partying than patrolling, constantly rambles on too long with what sound like aggravatingly endless ad-libs. Police-force reject Franklin (Jonah Hill) acts like a tough guy but still lives with his mother. And the proper but perplexing Jamarcus (Ayoade) is a genially low-key British-accented oddball. After coming face to face with a terrifyingly toothy alien, his deadpan description of the encounter is “that was really stressful.”

The green goo left behind at the murder turns out to be extraterrestrial in origin, and so is a disintegrator-ray device the main foursome finds. A nighttime scene in which they laughingly use it to destroy a living cow is more disturbing than wacky. So is a later bit in which they take the body of an alien back to Bob’s rec room and use it as a “Weekend at Bernie’s”-style prop, taking photos of themselves desecrating it in various insulting and sexual ways.

The screenplay by Jared Stern, Seth Rogen and Evan Goldberg feels tossed off, inconsistent and intermittently vulgar. That’s actually a a pretty good summary of most Rogen and Goldberg scripts (“The Green Hornet,” “Pineapple Express,” “Superbad”), and Stern’s only other screenplay credit was as a writer of the unwatchable “Mr. Popper’s Penguins.”

Director Akiva Schaffer, whose only previous feature was Andy Samberg’s 2007 clunker “Hot Rod,” lets the movie drag and dawdle enough to stretch its half-hour premise to more than three times that length. What should have been a headlong action finale has enough stops and starts to be more frustrating than frantic, with ridiculously fast-moving aliens who somehow can’t catch far less fleet-footed humans.

Originally titled “Neighborhood Watch,” a term that is used throughout, the movie was badly renamed “The Watch” to avoid any association with a recent shooting in Florida. No matter what it’s called, this “Costco and Aliens” dud is a real disappointment for fans of its star trio. Despite its title, “The Watch” is not a must-see.