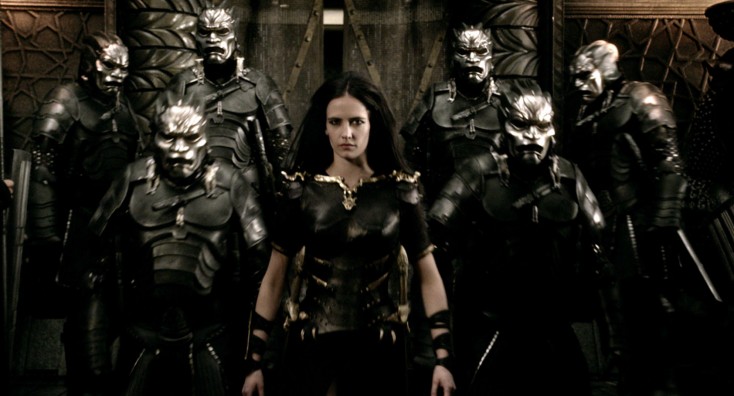 (l-r) JACK O’CONNELL as Calisto and SULLIVAN STAPLETON as Themistokles in 300: RISE OF AN EMPIRE. ©Warner Bros. Entertainment/Legendary Pictures.

“300: Rise of an Empire” is the rare sequel that manages to surpass its predecessor, 2007’s sensationally stylish swords-and-sandals saga “300.”

That’s due mainly to the impressive arrival of actress Eva Green (who was Bond girl Vesper Lynd in 2006’s “Casino Royale”). Her smoky-eyed, savagely sexy and slightly psycho portrayal of Artemisia, relentless commander of the ancient Persian navy, is powerful enough to make the movie’s Greek good guys look like a gaggle of girly men.

Sure, the perpetually angry Artemisia is a viciously vengeful monster, a traitor to her own people and the ruthless power behind the throne of Persian god-king Xerxes (the returning Rodrigo Santoro). But in the words of the poet, “Wowie kazowie, what a woman!”

Although Hellenic hardbody hero Themistokles (Sullivan Stapleton) is introduced defeating Persian invaders at the Battle of Marathon in 490 BC, most of the action is roughly concurrent with events chronicled in “300” that take place a decade later. What makes this plot more compelling is the fact that Themistokles has more depth, and more to do, than Gerard Butler’s Spartan King Leonidas. Themistokles feels guilty for sowing the seeds of “Athens will burn!” resentment in Xerxes and Artemisia, as well as for the deaths of so many non-soldiers who pick up arms to fight with him as he struggles to unite the Greek city states for the cause.

As in “300,” battle scenes are overwhelmingly and vividly violent, complete with amputation, decapitation and the near destruction of an entire nation. There’s even a BC take on suicide bombers and a Mideast oil tanker.

Even though director Noam Murro has replaced “300” helmer Zack Snyder (who co-wrote the screenplays of both movies), all of Snyder’s signature eye-candy enticements are on display. Spurts and splashes of blood resemble flung cherry-pie filling. Monochromatic and shadowy CGI backgrounds are like age-darkened oil paintings. Snyder’s “take a good, long look” trademark of ramping action scenes down to super slow-mo moments of impact somehow never gets old. And both movies have more six-packs on display than a 7-11.

Many visual elements are given dazzling fantasy trappings. Those gigantic army elephants from the first movie make a brief reappearance, a massive moon nearly fills the entire nighttime sky and a glowing golden baptism is responsible for magically transforming Xerxes into a chain-bedecked S&M poster boy.

Both movies are based on graphic novels by writer-artist Frank Miller, whose sensationalistic retellings of real events are so imaginatively interesting that it’s hard to fault him or the filmmakers for fudging a few facts. The real Themistokles didn’t shoot an arrow that led to the death of Persian King Darius, who most likely wasn’t even present at Marathon and actually died four years later. The real Artemisia warned Xerxes against the climactic naval assault that she rabidly encourages in the movie. Artemisia’s fate in that final-act fracas is flagrantly fictional.

And so what if Themistokles and Artemisia never really had a lust-crazed cabin-rocking “hate myself for wanting you” hookup? Leave the history to Herodotus, and just enjoy the heat.

No Time for Politics in ’13 Hours’