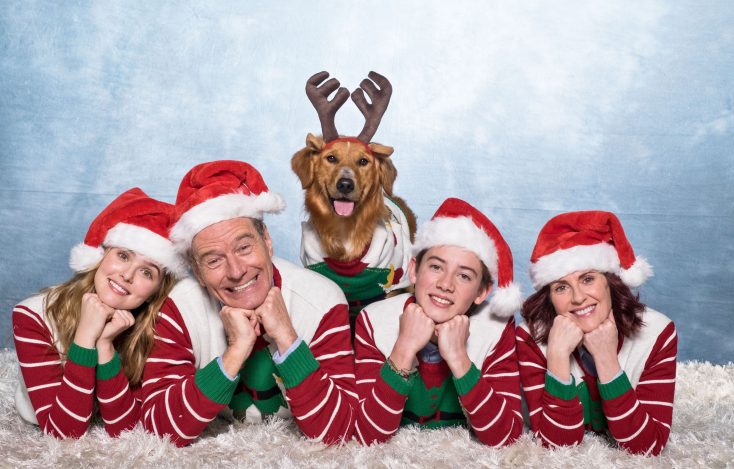 It’s every father’s worst nightmare: his baby girl’s first serious relationship as an adult. While meeting the man who may one day become your future son-in-law is no easy task for any dad to deal with, meeting your daughter’s boyfriend and thinking he’s an idiot is an even harder situation to handle.

That’s the premise behind the new Twentieth Century Fox comedy “Why Him?,” which pits overprotective, strait-laced dad Ned Fleming (Bryan Cranston, “Breaking Bad”) against his daughter’s new free-spirited boyfriend, Laird (James Franco, “This is the End”). When Ned’s daughter Stephanie (Zoey Deutch, “Bad Grandpa”) invites her family out to Stanford for the holidays to meet her boyfriend for the first time, Ned has no idea what to expect—but he definitely isn’t expecting to stay at the Silicon Valley billionaire’s mansion for the duration of the trip. That’s just one of several surprises Stephanie and Laird have in store for her family, though, as Laird tries to win over the Flemings and—unbeknownst to Stephanie—ask Ned for his daughter’s hand in marriage.

While Laird comes across a little strong at first, even going so far as to having the Fleming’s holiday card portrait tattooed on his back, he eventually starts to win over Stephanie’s mom, Barb (Megan Mullally, “Will & Grace”), and her younger brother, Scotty (Griffin Gluck, “Just Go with It”), with his unfiltered flattery and flashy lifestyle. Ned, however, isn’t as easily impressed and is determined to break up Laird and Stephanie before the trip is over. Laird is convinced, though, that Ned just needs a little more time to get to know him better and will willingly be calling him son by the time he leaves California. Will Laird ever get Ned’s blessing, or will the fact that Ned refuses to give Laird a fair chance result in him losing his daughter forever?

Although the story of a father hating his daughter’s significant other is nothing new, the comedy dream team of Cranston and Franco—not to mention a pretty hilarious script by Ian Helfer (“The Oranges”) and writer-director John Hamburg (“Along Came Polly,” “I Love You, Man”)—makes “Why Him?” one of the funniest and most endearing comedies to hit the big screen this year. Franco is terrific as the socially awkward boyfriend with a heart of gold, and it’s always great to see Cranston return to comedy. The former “Malcolm in the Middle” star walks a fine line throughout the film as he goes up against good-guy Laird, yet never once manages to turn viewers against his character even when it’s obvious that the doting dad is in the wrong.

Deutch also shines as the poor daughter torn between following her heart and not wanting to disappoint her father. Although she is no stranger to both the big and small screens, Deutch’s role as Stephanie in “Why Him?” could easily be the “Ringer” actress’ breakout performance—even if it is a bit Isla Fisher-like.

“Why Him?” features several great supporting performances as well, not to mention a few surprise cameos, which won’t be spoiled here. Keegan-Michael Key (“Key and Peele”) gets some of the movie’s biggest laughs as Laird’s right-hand man Gustav, who comes to Ned’s rescue during one particularly funny bathroom scene, and even though she’s never seen during the film, Kaley Cuoco (“The Big Bang Theory”) is great as Justine, the voice of Laird’s Siri-like in-home artificial intelligence system. Mullally gets a lot of laughs, too, especially during one unforgettably awkward bedroom scene with Ned.

Star-studded cast aside, another thing that makes “Why Him?” so entertaining is the fact that, unlike a lot of comedies these days that give away the best jokes in its trailers, the movie uses a lot of alternate takes in its previews to keep things fresh for moviegoers. One can only imagine the many other improvisations that didn’t make the trailers or the film’s final cut; hopefully there’s a Line-O-Rama or Alternate Takes extra on the Blu-ray release, as it’s sure to provide additional laughs.

While “Why Him?” may not be the most original movie to hit theaters, the fact that it doesn’t try to be anything but a smartly written comedy works well in its favor. There are no big surprises, no dramatic plot twists—it’s just a film for Cranston and Franco to show off their comedy chops with their crazy on-screen antics. It may not be laugh-out-loud funny throughout its 111-minute runtime, but “Why Him?” mixes in just enough heart opposite its humor to keep audiences entertained from start to finish. It’s the perfect movie to end 2016 with, as moviegoers are likely to leave the theater with big smiles on their faces.