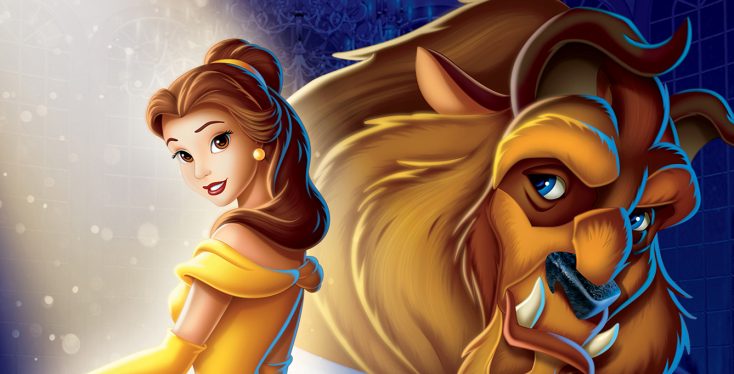 A tale as old as time gets the silver anniversary treatment, as “Beauty and the Beast” joins “Snow White and the Seven Dwarfs” on home video as part of the new Walt Disney Signature Collection.

An animated movie that captivates viewers just as much today as it did 25 years ago, “Beauty and the Beast” tells the story of an independent young girl named Belle (voiced by Paige O’Hara) who selflessly offers to take her father’s place when she finds a mysterious Beast (voiced by Robby Benson) holding him hostage in his enchanted castle. While at first Belle rightfully hates the Beast, she soon begins to see the prince trapped inside and an unlikely bond forms between the two outcasts.

The 25th Anniversary Edition Blu-ray/DVD Combo Pack with Digital HD (Walt Disney Studios Home Entertainment, MSRP: $39.99) not only includes the original theatrical release of the animated Disney classic, which was the first animated feature ever to be nominated for Best Picture at the Academy Awards, but also two alternate versions: the extended special edition released in 2002 that features the musical number “Human Again” and a sing-along edition of the film. While a good number of the bonus features—more than five hours—are only available to access digitally and are carried over from the previous Diamond and Platinum home video editions of the film, there are several entertaining new extras included on the Blu-ray disc, including a few that would fall into the category “something there that wasn’t there before.”

Probably the best new feature of the bunch is the fantastically entertaining “Menken & Friends: 25 Years of Musical Inspiration” featuring Alan Menken (“The Little Mermaid,” “Beauty and the Beast”), Stephen Schwartz (“The Hunchback of Notre Dame”), Kristen Anderson-Lopez (“Frozen”), Robert Lopez (“Frozen”) and Lin-Manuel Miranda (“Moana”). With Menken behind the piano, the five Disney composers not only sing along to some of “Beauty and the Beast’s” most memorable tunes, but also reflect on the film during the 19-minute extra. Viewers will hear a few behind-the-scenes stories from Menken himself, most of which are repeated elsewhere in the bonus features, while the other composers talk about the influence “Beauty and the Beast” had on their careers. It’s great to see Miranda and Anderson-Lopez geek out during several moments, like when Miranda talks about his favorite line in “Beauty and the Beast’s” opening number, “Belle,” and when Anderson-Lopez quickly chimes in on how many eggs Gaston eats each morning when Menken temporarily forgets.

“Always Belle” is another great extra, this time focusing on the woman behind the voice of Belle, Paige O’Hara. Clocking in at a little more than 11 minutes, the featurette offers fans a brief biography on the actress, complete with childhood photos, as O’Hara reflects on her life and discusses how being Belle is both “overwhelming and humbling at the same time.” Highlights include learning that O’Hara got engaged the day before she got the part of Belle (“I was on cloud nine!” she recalls), how Disney animators worked in the actress constantly pushing her hair out of her face during the recording sessions when animating the character and hearing O’Hara joke about how she felt she was too young to receive the Disney Legend Award in 2011.

“#1074: Walt, Fairy Tales & ‘Beauty and the Beast’” is a nine-minute look at Walt Disney’s fascination with fairy tales and how “Beauty and the Beast” was actually something the famous founder always wanted to work on. The featurette discusses how Disney once shipped 335 books that he purchased in Europe to the United States—many of them fairy tales—and how that library of books still offers Disney filmmakers “a treasure trove” of ideas to adapt. It’s interesting to hear how Disney filmmakers are retelling many of those same stories again with live-action films now that technology allows them to do things they couldn’t do before and to see the one piece of artwork filmmakers came across that hints that Disney was working on a “Beauty and the Beast” film long before the 1991 animated classic was released. Viewers will also learn that at one point Disney was thinking about adapting “Beauty and the Beast” into a TV show instead.

“25 Fun Facts About ‘Beauty and the Beast’” is a quick five-minute extra hosted by Disney Channel stars Gus Kamp (“Best Friends Whenever”) and Kayla Maisonet (“Stuck in the Middle”) that covers such fun facts as where to spot hidden Mickeys in the film, which “Beauty and the Beast” characters appear in other Disney films and what animals inspired the Beast’s unique look. While some of the facts, like that Angela Lansbury (who voiced Mrs. Potts) recorded the song “Beauty and the Beast” in one take or that “Be Our Guest” was originally supposed to be sung to Belle’s father, Maurice, when he first arrives at the Beast’s castle, are covered in the commentary track, for those who don’t want to sit through the feature-length commentary, this extra is a fun way to learn some interesting behind-the-scenes tidbits without investing a lot of time.

The commentary track by directors Kirk Wise and Gary Trousdale, producer Don Hahn and composer Menken is available on the extended edition of the film only. In addition to discussing putting “Human Again” back into the movie, why they cut it from the film in the first place and how the cast had to come back a decade later to record the characters’ voices for the new sequence, the four commentators offer a wealth of fun facts everyone who grew up watching “Beauty and the Beast” will want to devour—saying they didn’t listen to the commentary track already on the previous Diamond Edition home video release. Viewers will hear how the film’s musical numbers were recorded similar to a Broadway cast recording, with the orchestra, chorus and leads all in the same room at the same time; how the three girls constantly fawning over Gaston were really played by just two actresses; how fans can hear all of the original lyrics to “Gaston” in the stage adaptation of “Beauty and the Beast;” and even how Belle originally had a music box for a best friend, but that relationship was eventually pushed out of the film as Chip the teacup’s role grew. The filmmakers aren’t afraid to point out a few faults the film has, too, like how the bearskin rug during the tavern scene suddenly moves or how the chair Gaston is sitting in just disappears, and even admit to “borrowing”—okay, stealing—the final dance sequence from “Sleeping Beauty.” It’s a fun listen sure to keep every “Beauty and the Beast” fan entertained.

Wrapping up the extras on the Blu-ray disc is a quick three-and-a-half-minute look at “The Recording Sessions” featuring video footage of the cast recording their lines as the finished animated scenes play next to the footage (Angela Lansbury is particularly animated delivering her lines in the recording booth); a “Song Selection” option for those who want to jump to a particular number—“Belle,” “Belle (Reprise),” “Gaston,” “Gaston (Reprise),” “Be Our Guest,” “Something There,” “Beauty and the Beast,” “The Mob Song” and “Beauty and the Beast (Reprise)”—versus watching the entire sing-along version of the movie that plays the chosen scene with the song’s lyrics on the bottom of the screen for viewers to sing along to (a “Play All” option is available as well); and a brief sneak peek at the upcoming live-action “Beauty and the Beast” featuring clips from the film, a look at its costume designs and the now famous table read with “Harry Potter” star Emma Watson (Belle) and “Downton Abbey’s” Dan Stevens (Beast).

As if all that wasn’t enough, as previously mentioned, viewers can access more than five additional hours of bonus material digitally, including more behind-the-scenes extras, an alternate work-in-progress version of the film, deleted scenes, music videos and alternate sequences.

While it’s a bit annoying that not all of the bonus materials are accessible via the Blu-ray disc, the Walt Disney Signature Collection release of “Beauty and the Beast” is still a must own for any “Beauty and the Beast” fan. It’s hard to imagine an aspect of the film that’s not covered in one of the many bonus features, and while a lot of the extras were released before, the new supplements are well worth the price of the double—err, triple—dip. All in all, it’s a fitting package for one of Disney’s most beloved classics.