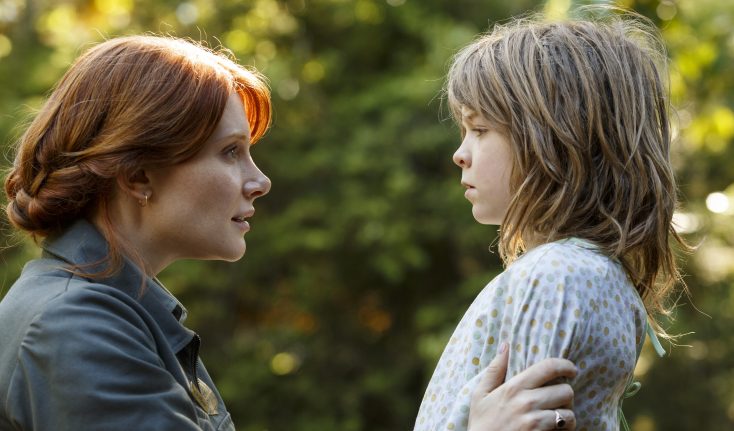 Walt Disney Studios’ recent reimagining of the classic 1977 film “Pete’s Dragon” is now available to own on DVD and Blu-ray, and while it may not be Disney’s strongest live-action adaptation to date, it’s still a heartwarming adventure families will want to add to their home video collection.

The screenplay by writer-director David Lowery (“Ain’t Them Bodies Saints”) and first-time feature film writer Toby Halbrooks is a bit different from the story adults might remember. In this version of “Pete’s Dragon,” 4-year-old Pete (Levi Alexander) finds himself alone in the woods after a deer jumps in front of his family’s car, causing Pete’s dad (who is driving) to lose control of the vehicle. The only survivor of the crash, poor Pete is defenseless against a hungry pack of wolves—until a giant green dragon appears to save the day. While at first Pete is fearful that the dragon is going to eat him, he soon realizes the dragon means no harm and goes off to live with him in the forest.

Pete grows up happily in the forest for years until a young girl named Natalie (Oona Laurence, “Bad Moms”) discovers the now 10 year old (Oakes Fegley, “Boardwalk Empire”) watching her from afar. After a chase to learn more about the mysterious young boy causes Pete to bump his head, he is taken from the woods by a friendly forest ranger named Grace (Bryce Dallas Howard, “Jurassic World”) to get some medical attention. When Pete wakes up in a hospital bed, the terrified youngster wants nothing more than to run back into the woods to be reunited with the only family he’s known for the past six years: his beloved dragon, Elliot.

Of course, Elliot misses Pete as well, and while searching for the missing boy, ends up being discovered by Natalie’s uncle, Gavin (Karl Urban, “Star Trek”). Gavin eventually captures the dragon, leading Natalie, Grace and Grace’s father, Meacham (Robert Redford)—who it turns out actually met Elliot himself many years ago—on an action-packed adventure to help Pete save his dragon and return him to the wild.

Running 103 minutes, “Pete’s Dragon” simply flies by thanks to a familiar storyline, which might be a little too formulaic for older viewers, but is still entertaining nonetheless. Young Fegley gives a convincing performance as a 10 year old who has spent more than half of his life living in the woods, and audiences can’t help but love the adorable dog-like dragon, Elliot.

Given that “Pete’s Dragon” is truly Pete and Elliot’s tale, the rest of the cast doesn’t really get a lot of time to shine, especially Wes Bentley (“American Beauty”) as Natalie’s father, Jack. Everyone delivers decent enough performances, though, so as not to detract from the story at hand.

The Blu-ray/DVD Combo Pack with Digital HD (MSRP: $39.99) comes with a handful of extras, most of which just skim the surface of taking a worthwhile look at the making of the film.

“Notes to Self: A Director’s Diary” takes a quick look at the film’s production schedule through the eyes of its director, David Lowery. Beginning on the eve of production and ending during Lowery’s flight back from New Zealand after production wrapped, the director discusses how he first got involved with the project, why he chose to film the movie in New Zealand and what an honor it was having Robert Redford in the film. Lowery also points out some easily overlooked details in the movie, like how the house Grace brings Pete to has green leaves on the wallpaper, which would make him feel more comfortable and like he was back home in the woods.

“Making Magic,” also available on the DVD release, takes a quick look at how, as Robert Redford put it, one makes a movie about a dragon when you don’t have a dragon. Viewers will see several fun facts about Elliot appear on-screen during the informative extra, like how it took 150 artists to create him, that he’s a vegetarian and how he has 20 million hairs. Not surprisingly, viewers will also learn that his behavior was modeled after house pets like cats and dogs to make him more relatable to audiences.

“’Disappearing’ Moments” is a montage of the director’s favorite moments that didn’t make the final cut of the film with an introduction by Lowery. Since the scenes play one after another, it’s hard to figure out exactly where some of them end. None of the scenes really add too much to the film, although it is fun to see Gavin get pulled over by the cops for speeding after his first encounter with Elliot in the woods.

The blooper reel is easily skippable, comprised mainly of the cast making funny faces, sneezing and dancing during takes. There is one extended segment, though, dedicated to Wes Bentley forgetting his lines during a scene with Bryce Dallas Howard.

Unfortunately, there was apparently a blooper involving Robert Redford that didn’t make the cut, although it is referenced repeatedly during the commentary track with David Lowery, Toby Halbrooks, Oakes Fegley and Oona Laurence. Having the kid actors sit in on the commentary was a great idea and makes the thoroughly entertaining track arguably more enjoyable than the feature film itself. At one point, Fegley actually loses his tooth! The foursome share a lot of stories from the set and point out some interesting tidbits about the film—like how Pete’s loincloth is made from the khakis, jacket and backpack audiences first see him in at the start of the movie. Viewers will also learn that John Kassir, who voiced the Crypt Keeper from “Tales from the Crypt,” made all of Elliot’s sounds; how “Ernest Scared Stupid” influenced one of the scenes; and what Bryce Dallas Howard and Robert Redford movies the young stars of “Pete’s Dragon” have actually seen. Both Lowery and Fegley also make a plea to Disney execs during the commentary track to be involved with one of the upcoming “Star Wars” films. “I can be Luke Skywalker’s grandson,” Fegley says.

“Welcome to New Zealand” is a brief promotional piece featuring the cast and crew talking about how great it was to film in the majestic country. Viewers will hear about all of the activities the cast partook in when they weren’t on set, from kayaking to bungee jumping, as well as the many different scenic settings the country boasts.

Wrapping up the bonus features are two music videos—The Lumineers’ “Nobody Knows” and Lindsey Stirling’s “Something Wild” featuring Andrew McMahon in the Wilderness—featuring footage of the artists performing the songs intercut with scenes from the movie.

While “Pete’s Dragon” doesn’t quite reach the heights of some of Disney’s other live-action films, it’s still a fun movie for kids and a nice throwback to the classic live-action feature films of the studio’s past that adults are sure to enjoy.