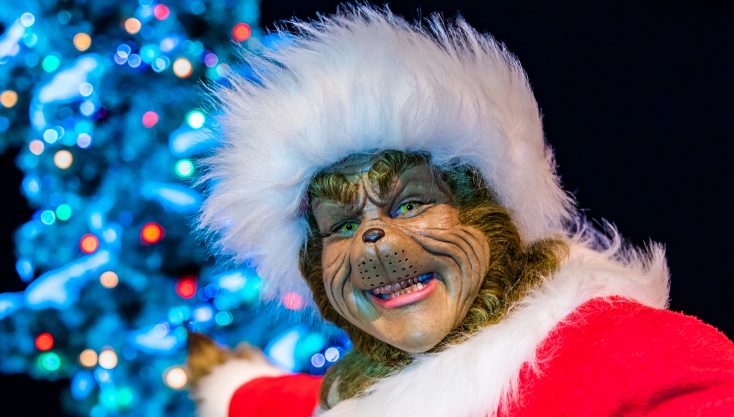 HOLLYWOOD—Mario Lopez took a moment out of his busy schedule to join the Grinch for a celebration of the annual holiday tradition of A Very Merry Grinchmas at Universal Studios Hollywood. As part of the Grinchmas tradition, amusement park-goers enter Whoville’s town square where they can take photos with the Grinch and his dog Max while enjoying whimsical holiday-themed treats.

During the special media day event, the “Access Hollywood” host read Dr. Seuss’ “How The Grinch Stole Christmas” to the crowd and then joined the Grinch, Cindy Lou Who and the mayor of Whoville in a Christmas tree lighting ceremony.

The spectacular 55-foot topsy turvy Grinchmas tree is decorated with hundreds of ornaments and thousands of white and multi-colored LED lights choreographed to music.

Aside from the Grinchmas excitement, Universal’s The Wizarding World of Harry Potter also is taking part in the holiday season with its annual The Magic of Christmas at Hogwarts Castle, a dazzling light projection spectacular, brings the iconic Hogwarts castle to life.

Holidays at Universal Studios Hollywood runs daily through Sunday, Dec. 29, and is included in the price of theme park admission. More information available at www.UniversalStudiosHollywood.com.