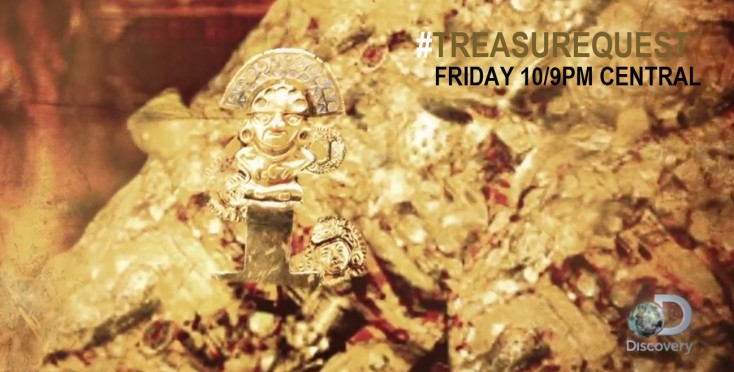 Hidden somewhere off the south eastern coast of Brazil, could lie hundreds of millions of dollars worth of lost Incan gold.  For 400 years, many have searched, fought and died looking for this elusive bounty.  But all have failed to hold onto it.

The all-new series each week will take viewers along an epic journey with an elite team of explorers searching for a rare Incan treasure—located on an island that is home to thousands of deadly vipers.

“Every kid hears these stories about treasures and pirates and going off on adventures around the world with dreams of finding lost gold. And that’s what I do. That’s what I’m doing right now,” said Cork Graham, the team’s expedition leader.

In 1524, a horde of Incan gold—known as the “Treasure of the Trinity”—was stolen.  For 500 years, Jesuits priests, privateers such as Thomas Cavendish and mathematician Paul Thiry have all searched the coast of Brazil for this legendary bounty, but in all that time, no one has cracked the code as to where the treasure might have been hidden, until now.

Discovery Channel will follow the adventures of these real-life treasure seekers who set out for two months in search of this priceless booty.  The team includes Cork Graham, Expedition Leader, who has dedicated his life to searching for lost treasure.  At the age of 18, he participated in a covert search for Captain Kidd’s treasure off the coast of Vietnam but was captured and accused of being a spy.  He is now focused on the Treasure of the Trinity and determined that it will not escape his grasp.

Mehgan Heaney-Grier, expedition Dive Master, gets her kicks free diving, swimming with sharks, or documenting alligators in their natural environment, so she is no stranger to high-pressure situations—natural or man-made—especially among a crew of testosterone-fueled alpha males.  The true value of the Treasure of the Trinity for her lies in its historical and archaeological significance, not its monetary worth.

Jeremy Whalen, the ship’s mechanic, requires only a few tools and he can build it, fix it or replace it. While he respects the historical significance of lost treasure, his real reasons for participating in the expedition are twofold: the adrenaline rush and the promise of a huge payday.

Australian herpetologist Bryan Fry has 25 years of experience dealing with deadly reptiles and the battle scars to prove it. He’s been bitten by snakes 26 times, yet eagerly keeps coming back for more.  For him, the real treasure is the chance to study the deadly golden lancehead viper up close.

Keith “Cappy” Plaskett, the boat’s captain, has always dreamed of searching for sunken Spanish galleons off of Brazil’s coast, but navigating these treacherous waters and the brutal storms that unexpectedly form without warning will test the limits of his sailing skills.

The team will stop at nothing—scaling peaks through the jungle, exploring treacherous caves and diving among the galleons that sunk to the ocean floor centuries ago.  Treasure hunting is nearly impossible and the team will face dangers both on land and at sea.  It’s a place where modern-day pirates still exist and word has gotten around that they are looking for treasure.

But they’re going to need more than pure brawn on this quest.  The team will need to solve complex mathematical clues and puzzles protecting the treasure—the same ones that have thwarted countless others before them.  But most of all, they’ll need nerves of steel as they brave one of the most deadly places in the world—where one careless step could not just cost everyone incredible riches, but ultimately their lives.

“Treasure Quest: Snake Island” is produced for Discovery Channel by MAK Pictures.  To learn more, go to www.discovery.com<http://www.discovery.com, on Facebook at Facebook.com/discovery and on Twitter @Discovery.