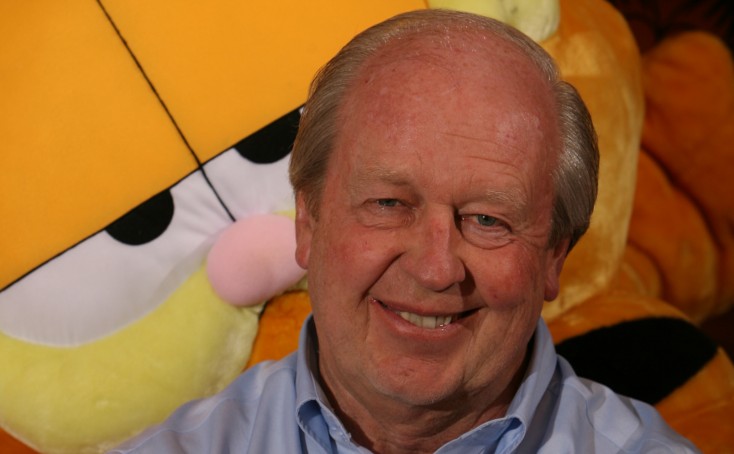 HOLLYWOOD—For 36 years, “Garfield” has been a comic strip fixture, entertaining readers with his amusing antics, his love of food and naps, putting up with his dog-friend Odie and serving his purpose as loving pet to his human caregiver Jon.

Created by cartoonist Jim Davis, “Garfield” has become a worldwide pop culture phenomenon. Starting at as a syndicated comic strip in 41 newspapers in 1978, “Garfield” is now in more than 2,100 newspapers worldwide and read by 200 million people. Guinness World Records dubbed “Garfield” “The Most Widely Syndicated Comic Strip in the World.”

From the comic strip’s success, the “Garfield” brand has expanded and crossed over to many mediums: TV shows (“Garfield and Friends,” which CBS syndicated from 1987-2000, receiving four Emmy Awards for Outstanding Animated Program, films (“Garfield: The Movie, “Garfield: A Tail of Two Kitties,” which starred Breckin Meyer, Jennifer Love Hewitt and Bill Murray) and comic books (over 200 million books sold worldwide). “Garfield” has hit the digital age, with its own website, and a Facebook presence, with nearly 17 million Likes (http://facebook.com/Garfield).

Through its Paws, Inc. label, “Garfield” has a licensing program with nearly 400 manufacturers creating thousands of products worldwide, from plush dolls to books to apparel.

Starting in the 1980s, a number of TV specials featuring the world’s favorite orange tabby, debuted. Now, those specials are compiled together in the “Garfield Holiday Collection,” available on DVD exclusively at Walmart stores starting Tuesday, Nov. 4 and on iTunes and other digital platforms on Nov. 11.

Speaking by phone from his home/studio in Indiana where he still draws (electronically now) the cartoon and employs of team of more than 50 employees, Davis, 69, discussed the holiday DVD collection, which includes “A Garfield Christmas,” “Garfield’s Thanksgiving,” “Garfield’s Halloween Adventure,” “Garfield on the Town” and Garfield in Paradise,” as well as a never-before seen featurette in which the folksy cartoonist takes you on a behind-the-scenes tour of his studios where “Garfield” magic is made.

Q: The first of these specials first aired nearly 30 years ago with the short “Garfield’s Halloween Adventure.” Does it seem that long ago?

Davis: No. It seems like just yesterday for several reasons: the memories were just so vivid of recording the shows with the talent and working on the animation. Those specials were done the old fashioned way with film. They would take eight months to do a half hour. We pretty much lived them when we created those.

Q: The good news is that they’re not just nostalgic, the humor in the specials still holds up.

Davis: Thank you. We worked very hard on that. Especially with the Christmas special, we worked to not only have as many funny moments as possible, but to have a couple touching moments reminiscing about what Christmas and family mean to people without getting sappy or anything like that.

My philosophy has always been to try to do those things in a story to make it worth a half-hour of anyone’s time. I like for people, after the show, to feel as though that was a half-hour well spent. At least I didn’t waste anyone’s time. I try to give a lot of laughs and maybe a little bit of excitement and maybe even a tear or two, if you get an opportunity with the story. That was just great fun. Of all of them, maybe the most fun to do for me was the “Garfield in Paradise,” because there was a lot of rock and roll in it and I got to work with (renowned radio DJ) Wolfman Jack. We had a million laughs doing that show.

Q: There are songs in the specials. Did you write any of the music or the lyrics?

Davis: You won’t see me on any of the writing credits but I sat in on the music writing sessions, and I can tell you which lines I added. If you listen carefully, I’m one of the voices singing, “It’s a good old-fashioned Christmas down on the farm,” (in “A Garfield Christmas”). I’m the guy who went flat. At any rate, I worked with Desiree Goyette. With everybody, it was so much fun. I did the scriptwriting, directed the voice tracks, and worked with the folks on the music. Working with Lou (Rawls) was great. It was one of the first things Lou did after he took some time off. We talked about the kind of music a cat would like, that Garfield would like. I told the producer it should be bluesy, jazzy and something kind of cool. I told him, when I was in college there was this jazz singer from the south side of Chicago. His name is Lou Rawls. I didn’t even know where he was. And Lee said, “Let me give him a call.” I said, “You can get Lou Rawls?” And he said, “Yeah, let me see if he’s available.” And he was. He actually sang most of the opening numbers of all of our specials.

Q: It was fun watching you walk around your studio and seeing your dedicated staff in the featurette. Do you have tours for the public there?

Davis: No, we’re not set up for that. Maybe someday.

Q: When you were starting out in the ‘70s with “Garfield,” did you ever imagine you’d be running this billion-dollar empire?

Davis: I had a really grand plan. I worked for nine years on the “Tumbleweeds” comic strip as an assistant to Tom Ryan. Every now and then he’d publish a book. So I thought when I get to my strip, I’m going to publish a book after five years and then maybe produce a plush doll after 10 years. That was the extent of my grand plan for anything beyond the comic strip. No, I didn’t imagine anything like this; I wasn’t even prepared for it. I had worked as a layout artist and copywriter for a small agency for a while so I was familiar with the process of doing products and things like that, but I had no idea we would go into animation or things like this. Licensing (in the late ‘70s) was a relatively young business. There was Mickey Mouse, some Peanuts stuff and Strawberry Shortcake was coming on the scene. Those were great days. There were three networks. So the Christmas special aired to a 35 (market) share—a third of America, because there were only three networks (at the time). Licensing was good. It was really the golden age for all those kinds of things. So we were certainly glad to have that experience. In a way, it’s helped prepare us for the challenges we have today. Not just going online, but also all the ways that content is being distributed.

Q: Why does Garfield love lasagna so much?

Davis: I love lasagna. I thought it would be really funny to have a cat like lasagna. As it turns out, I’ve gotten tons of letters from people saying their cats like lasagna as well. So I guess it was no big deal. I don’t know if it’s the cheese or the meat or what, but cats do love lasagna. I just thought it would be a really odd thing and a funny personality quirk for Garfield. As it turns out, it’s not that much of a departure from what cats really do like. But, yeah, I love lasagna; I love Italian food.

Q: Where did the character of Odie come from?

Davis: Odie was actually created to give Garfield grief. Humor comes from conflict, so once I created Garfield, with his personality, I created all the perfect opposites to Garfield and imbued them in a dog, which is the opposite of a cat. That sets the stage for humor. Tall, short. Fat, skinny. Smart, stupid. Dog, cat. The name Odie is—I used to be able to say town idiot but I can’t anymore because it’s not politically correct—named after a gentleman, who was in a town I grew up (Marion, Ind.). The whole community kind of took care of him. He was the sweetest man, a funny guy. So I named the dog Odie after him. Also, Odie the dog is trusting to a fault, a free spirit and in love with life. He’s always happy.

Q: What’s ahead in terms of films or TV specials?

Davis: We just wrapped the fifth season of “Garfield” on Cartoon Network. They’ve been airing the series around the world in 123 countries. Actually, I’m putting the finishing touches on a children’s musical for a theater in Washington, D.C. That will be out next spring. And we are in movie discussions. We’ve also had nice growth internationally. China’s been very good for us the last year or two. “Garfield” seems to work well over there as an entertaining character. So it’s keeping us off the streets.

Q: You get a lot of fan mail from children and adults every day. How do you feel about known that your work is so admired and beloved?

Davis: It’s great to know after 36 years that “Garfield” still resonates with readers. I’ll never get used to that. It’s always nice to hear that people enjoy him. That stuff means more than you’ll ever know. It’s a family kind of feeling here. So we have fun.