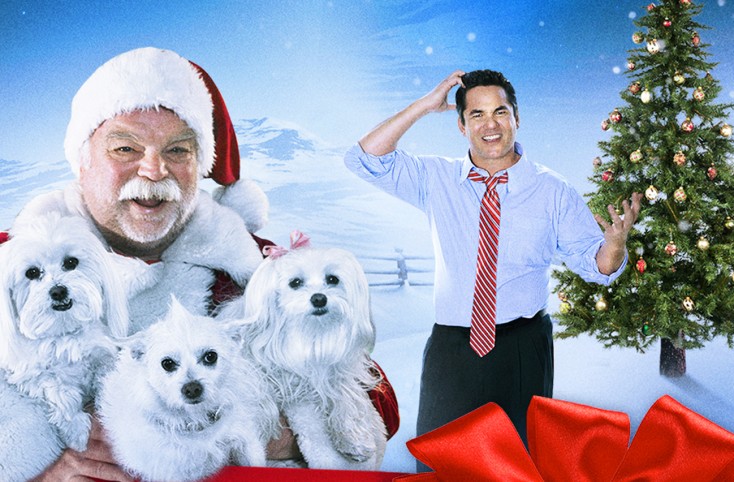 HOLLYWOOD—If you ever wondered whatever happened to “Lois and Clark: The New Adventures of Superman” star Dean Cain, look no further than a family friendly cable channel near you or in the family section of the DVD aisle.

Cain plays the owner of three adorable little white dogs. Given a last minute work assignment to meet a potential client some distance away, Cain’s Matt Russell rushes out of the house just before Christmas, forgetting to leave food for his pets.

While Matt is away, two burglars break into the home, stealing all the presents under the Christmas tree. It’s up to the three dogs—hungry Barkos, pampered Wagos and adventure-loving Arfamis—who speak to each other when no humans can hear them— to rescue the presents. They climb into the crooks’ van and end up on a wild journey. Will they recover the gifts and find their way home? Will the shopping mall Santa help them? And can they avoid a cruel dogcatcher hot on their tails?

Meanwhile, Matt is on the road racing to his client meeting in hopes of wrapping things up before the all-important holiday. When he finally realizes he forgot to feed his dogs, he races home before his easily angered wife arrives.

Reached at his Malibu home, Cain reveals why he loves making holiday movies and how he celebrates Christmas. He also responds to former girlfriend Brooke Shields’ recent revelation about their relationship years ago in her memoir “There Was a Little Girl: The Real Story of My Mother and Me,” and if there is any chance he would be interested in reprising his Clark Kent/Superman role with Teri Hatcher someday.

Q: I was going through your list of credits. I counted at least 10 holiday movies that you’ve done in recent years and there appears to be more in the works. What’s up with that?

Cain: I love the holidays. It’s a great time for families to get together and watch movies, especially fun family movies. There is a huge demand for them because there are three or four TV stations that are airing just Christmas movies now. So I love it.

Q: You could have back-to-back films of yours shown on these channels, right?

Cain: If they wanted to. There could be a Dean Cain Week, and I’m okay with that. I’m looking forward to that.

Q: Let’s talk about “The Three Dogateers.” It’s a fun comedy that viewers of all ages laugh.

Q: The technology has become so advanced with making the dogs look like they’re talking that you almost forget they’re actual dogs.

Cain: It’s true. And you put that together with the holidays and you have all those reasons to jump up and down and say, “I want to see this and watch that.” The thing is I have a bunch of little cousins and my son’s little half-brother and sister who enjoy these kinds of films. You put a talking dog on television and they stop what they’re doing and listen to them and watch them. My son made me watch “Beverly Hills Chihuahua” 15 times, and I enjoyed it, to be honest.

Q: So you’re working with three dogs in this film. Was it a challenge?

Q: Did you have a favorite dog in this film?

Cain: No. It was hard to tell them apart. They’re all little white dogs. (He laughs.)

Q: Did this film require a big time commitment from you? Cain: Yes, but when you’re doing it and having a good time because it’s a silly big comedy, then it’s fun.

Cain: Close to a year ago. I’ll probably make six or seven movies in a year, along with doing this show called “Hit the Floor,” and “Masters of Illusion.” So I get lost sometimes. And I’m also raising my son, which must be the toughest part of the job of them all and my favorite one, by the way.

Q: Are you a dog man or cat man in real life?

Q: Do you have dogs?

Cain: I have two.

Q: Are they little white dogs like your co-stars in the movie?

Cain: No. My mom had a Maltese like the ones you see in the film for a long time. It was sweet and lovable, a funny little goofball that made me laugh all the time. My dogs are a little bigger. I have a black lab and a golden retriever. They’re as sweet as can be. They’ll get a big bone for Christmas, that’s for sure.

Q: Do you recall a favorite Christmas or a memorable Christmas that stands out in your mind?

Cain: I remember so many. I could go on for an hour and a half. I remember when my little sister was just a baby and we had a babysitter for my sister. I didn’t understand why we would have a babysitter over on Christmas Eve, but we were going to walk outside with my brother and my mom and stepdad (film director Christopher Cain) to look for Santa’s sleigh flying through the air.

We walked around the block and couldn’t find it. When we got back, it was like Santa already had come and delivered our presents. We didn’t know how they got there. I was so amazed that I knew he was real. I got my first skateboard with polyurethane wheels. I was over the moon. I thought it was the greatest thing ever.

Since then, Christmas for me, has always been about being around family. My son (Christopher) is 14 now so the last 14 Christmases have been for him. They’re all about watching the children and watching the excitement they have. For me, I just love the holidays at the end of the year. It’s a great time for families to get together and reflect. We always tend to have the entire family together on top of each other so it becomes a vacation Christmas and madness kind of ensues.

Q: You’re part Asian. Have you ever been to Japan or visited other countries in Asia? Do you celebrate that aspect of your nationality?

Cain: Well, I never knew my biological father (Roger Tanaka). So that was tough for me. I never knew anyone from that side of the family except my great-uncle Ed. He was my grandfather’s brother. I met him around 10 years ago, but he has since passed away. NBC used to have a show called “Who do you Think You Are?” I was going to do that. I was really excited to what my ancestry was. I understood I had a 100-year-old aunt living in Japan. So I was really excited to do that. But I haven’t been to Japan yet. I would love to do so. It would be easier if a show like that would do it and do all the research for me. Call me lazy.

Q: I guess it’s hard finding time to do that with your busy schedule, isn’t it?

Cain: I wanted to take my son with me and he was really excited to go and see his great-great aunt. So it is a pretty cool concept. I’d love to sometime. I have been to China and Vietnam and other Asian countries. I notice people look a lot more like me than they do in Middle America.

Q: On a separate matter, were you aware you were going to be discussed in Brooke Shields’ book?

Cain: (chuckling) Yeah, she called me and we talked about. I told her, “Be candid and be honest.” I didn’t approve or disapprove anything she said. I trust her implicitly. We’re still great friends. I figured if she was going to talk about her life, she might mention that. I haven’t gotten to that part of the book, but I’m sure she’ll treat it fairly and honestly and I’m anxious to read all about that and find out more about what I didn’t know about her. I knew that part about her.

Q: Will there ever be a “Lois and Clark” reunion?