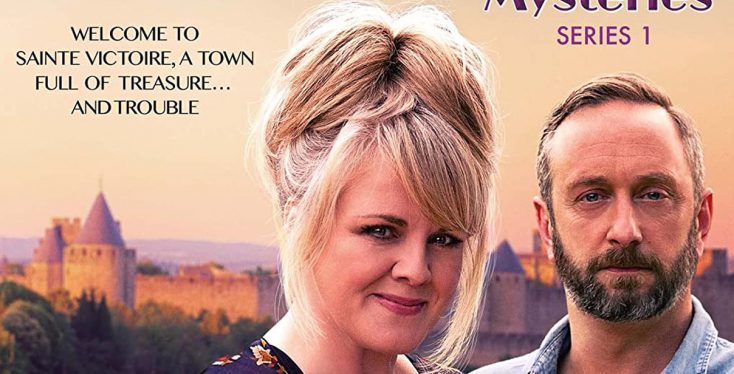 THE FLIGHT OF THE PHOENIX. (DVD Artwork). ©The Critereon Collection.

The Flight of the Phoenix (Drama)

The Criterion Collection edition of the 1965 classic survival movie “The Flight of the Phoenix” arrives on a Blu-ray Special Edition Tuesday March 22.

A downed airplane is a motley group of men’s only protection from the relentless desert sun, in this psychologically charged disaster epic, one of the all-time great survival movies. James Stewart is the veteran pilot whose Benghazi-bound plane—carrying passengers played by an unshaven ensemble of screen icons including Richard Attenborough, Ernest Borgnine, Ian Bannen, Dan Duryea, Peter Finch and George Kennedy—crash-lands in the remote Sahara. As tensions simmer among the survivors, they find themselves forced to trust a coldly logical engineer (Hardy Krüger) whose plan to get them out may just be crazy enough to work—or could kill them all. Directed with characteristic punch by Hollywood iconoclast Robert Aldrich, “The Flight of the Phoenix” balances adventure with human drama as it conducts a surprising and complex examination of authority, honor, and camaraderie among desperate men.

The Blu-ray Special Edition includes a digital restoration, with uncompressed monaural soundtrack, a new conversation between filmmaker Walter Hill and film scholar Alain Silver, a new interview with biographer Donald Dewey on actor James Stewart and his service as a bomber pilot, an essay by filmmaker and critic Gina Telarol, and more. It will be available for the suggested retail price (SRP) of $39.99.

For the Love of Money (Drama)

The thrilling new crime drama, For the Love of Money, arrives on Blu-ray + Digital and DVD Tuesday March 22, from Lionsgate.

In celebration of the 50th anniversary of Francis Ford Coppola’s Academy Award-winning masterwork “The Godfather,” Paramount Pictures will be releasing all three films in the epic trilogy on 4K Ultra HD for the first time ever Tuesday March 22, with all the films having been meticulously restored under the direction of Coppola.

Coppola’s masterful film adaptation of Mario Puzo’s novel chronicles the rise and fall of the Corleone family and the film trilogy is rightfully viewed as one of the greatest in cinematic history.  In preparation for the 50th anniversary of the first film’s original release on March 24, 1972, Paramount and Coppola’s production company American Zoetrope undertook a painstaking restoration of all three films over the course of three years. Every effort was made to create the finest possible presentation for today’s audiences who can watch the films using technology that has advanced dramatically since 2007 when the last restoration was completed by eminent film historian and preservationist Robert Harris.

Using that work as a blueprint, the team spent thousands of hours to ensure that every frame was evaluated to create the most pristine presentation while remaining true to the original look and feel of the films.

Over 300 cartons of film were scrutinized to find the best possible resolution for every frame of all three films, over 4,000 hours were spent repairing film stains, tears, and other anomalies in the negatives, over 1,000 hours were spent on rigorous color correction to ensure the high dynamic range tools were respectful of the original vision of Coppola and cinematographer Gordon Willis and in addition to the 5.1 audio approved by Walter Murch in 2007, the original mono tracks on “The Godfather” and “The Godfather: Part II” have been restored.

The disc set includes legacy commentaries by Coppola, as well as access to Digital copies of three films.

In addition to the widely available 4K Ultra HD Blu-ray set, a 4K Ultra HD Limited Collector’s Edition will also be released in deluxe packaging and includes a hardcover coffee table book featuring stunning photographs, as well as portrait art prints on archival paper. Both 4K Ultra HD sets include new bonus content including an introduction to “The Godfather” by Coppola, a featurette about the preservation process, photos by acclaimed photographer Steve Schapiro, home movie footage, and comparisons of the new restoration to earlier versions of the films.

“The Hunger Games Collection” will be available on 4K Ultra HD + Blu-ray + Digital SteelBook for the suggested retail price (SRP) of $119.99.

Starring Ignacyo Matynia (“A Good Cop”), Victorya Brandart (“The Bay”), Mark Lobene, Joy Donze, Claire McClain, Louisa Bradshaw, Jarred Harper and Grammy and Emmy award-winner John Easterlin star in the artful psychological thriller that asks the question, “How far would you go to have a child?”

The film tells of a young couple, desperate to have a child, that begin treatment at a renowned doctor’s secluded facility. The couple becomes suspicious when the medical regimen brings on psychological side effects and try to learn the truth about The Institute.

When charismatic but down-on-his-luck Stanton Carlisle (Bradley Cooper) endears himself to clairvoyant Zeena (Toni Collette) and her has-been mentalist husband Pete (David Strathairn) at a traveling carnival, he crafts a golden ticket to success, using this newly acquired knowledge to grift the wealthy elite of 1940s New York society. With the virtuous Molly (Rooney Mara) loyally by his side, Stanton plots to con a dangerous tycoon (Richard Jenkins) with the aid of a mysterious psychiatrist (Cate Blanchett) who might be his most formidable opponent yet.

Del Toro co-wrote the enthralling film with Kim Morgan, based on William Lindsay Gresham’s novel. The suspenseful psychological thriller also is available now on Digital. It is nominated for four Academy Awards including Best Picture.

What if one of the best days of your life suddenly turned into your very worst nightmare? And what if you were forced to relive that same day again and again?  “Groundhog Day” meets “The Sixth Sense” in director Craig Singer’s (“Animal Room”, “Dark Ride”) horror-thriller “6:45,” debuting on Digital, Blu-ray and DVD Tuesday March 22, from Well Go USA Entertainment.

A couple embarks on a weekend getaway only to find the island curiously deserted. After stumbling upon the town’s dark secret, they trigger a time loop, forcing them to relive a demented cycle of terror with seemingly no means of escape. “6:45” stars Michael Reed (“Brides of Satan”), Augie Duke (“The Amityville Moon”), Armen Garo (“Dexter: New Blood”) and Thomas G. Waites (“The Thing,” “Money Train”).

“The Madame Blanc Mysteries: Series 1” is available now on DVD, from Acorn Originals.

Antiques dealer Jean White (Sally Lindsay) runs a successful business with her husband, Rory. But when he suddenly dies, she discovers his shady business practices have left her nearly penniless. She relocates to their one remaining asset—a cottage in the south of France and starts investigating his mysterious death along with various other local mysteries surrounding antiques.

The bonus materials include a “Script to Screen” (49 minutes) and “Antiques & You” (5 minutes) featurettes.

The two-disc DVD set is available for a suggested retail price (SRP) of $39.99, and includes all six episodes of Season 1.

Front Row Features is giving away a copy of the award-winning horror-thriller “6:45” on Blu-ray to three lucky readers. To enter the contest, simply email socalmovieeditor@aol.com by March 28 for your chance to win. Good luck!