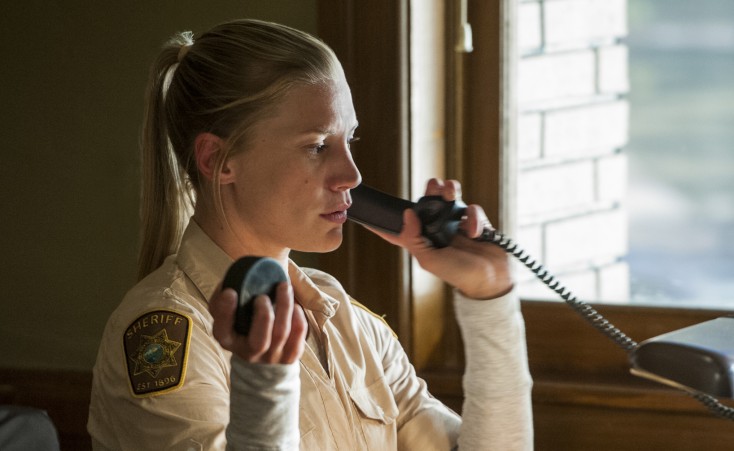 HOLLYWOOD—Katee Sackhoff has a confession to make.

“I’m a bit OCD when it comes to planning,” the actress reveals by phone as she makes a last minute check of things before heading off to Dubai for a month or so with her boyfriend, actor Karl Urban (who plays Dr. “Bones” McCoy in the rebooted “Star Trek” movie franchise), and his two sons, where he will be on location shooting “Star Trek Beyond.”

“Whenever you’re in a relationship and you both travel a lot, sometimes it’s a necessity to make a list of things to do with the kids,” she says. “I’m the built-in babysitter. Wait, they’d kill me if they heard me say that. I mean, I’m the built-in teenage-watcher.”

Sackhoff, a Portland, Ore., native, says she is excited about getting to explore a country she has never previously visited. She’s also rather relieved that she can play tourist instead of having to work, or fret about work, for a while. She wrapped “Don’t Knock Twice,” a supernatural horror movie in Cardiff, Wales over the summer while on hiatus from her TV series, “Longmire.”

Though not 100 percent certain that the Netflix crime thriller series will be renewed for a fifth season, Sackhoff is hopeful she will get a chance to reprise her role as Deputy Victoria “Vic” Moretti, the second-in-command to Sheriff Walt Longmire (played by Aussie actor Robert Taylor) in a rural Wyoming county rife with crime and mystery.

She has starred in the series for four seasons now, first on A&E, and most recently on Netflix, the streaming service, which picked up the series after the cable channel inexplicably dropped it from their schedule after the third season. Cast and crew subsequently went back to work on the Season Four, and all 10 episodes of the season were made available to Netflix subscribers on Sept. 10. Viewers also can watch the previous three seasons of “Longmire” on Netflix.

The 35-year-old actress says she is pleased the show was picked up and she got to continue exploring the many layers of Vic this past season, although she found the Philadelphia transplant a bit adrift this season. That only makes her all the more curious what the show’s creators, John Coveny and Hunt Baldwin, have in store for Vic and the rest of the cast next season—if there is a next season. The show is based on the series of mystery novels by bestselling author Craig Johnson.

Q: How excited were you to get back to playing Vic this season because it was up in the air a little bit?

Sackhoff: It was interesting. I sort of talked to the producers about the fact I felt like she was like a ship without a harbor, really. She seemed incredibly untethered this season, and there was really no consistency to her actions. I found it a bit frustrating as an actor, actually, because it’s hard to portray (a character) one way when you know the audience is going to go, “Well, that’s not Vic.” So we had to find a way to play her as, “Maybe this isn’t the Vic you know. But this is where we’re going with her.” So it was a little weird because you’re not sure how the audience is going to react to subtle differences. She just seemed a bit uncharacteristically out of sorts, I guess.

A lot of times you pull from personal experience or people you know, especially when you are playing in a (genre) that’s based in reality. Having an emotional reaction to something that you aren’t familiar with, you kind of search your peers and ask them, “Did you ever do this? Would you ever do this?” Everyone had a reaction that it was a really weird thing. I guess I’m such an OCD person that I’ve never not paid a bill in my entire life. I have a hard time understanding how someone could forget to do that. So it was little things like that that had me thinking, “This is not who she is. This is not who I’ve known her to be for four years.” So I was getting really confused and frustrated by it. Ultimately, she ended (the season) in a place that was neither here nor there of where she was the year before and at the beginning of the (season). I don’t feel we have an indication of where she would go the next season, if we do get one.

Q: Would you like to have more input into Vic or at least know where the writers are heading with her?

I know that in the last season, in the episode with Sean (Keegan, who was played by Michael Mosley) and Vic, where they get kidnapped, basically, they’d been trying to do that for a long time. I knew that was coming for a long time. It’s just that every season, it kept getting pushed (back) because it didn’t fit, so I’d rather not know.

Q: Generally, what would you like to see Vic do in the future?

Sackhoff: I’d like to see her get a little more self-sufficient, take the initiative more, and speak up a bit more. It’s a voice we haven’t really heard yet. That would be kind of interesting to go into. I don’t really have any dying urges to have her go anywhere. I’ve been enjoying where she’s going. I guess I kind of have the same attitude as Robert, and want them to surprise me.

Q: What do you think of the cast changes to the show this season?

Sackhoff: I love the way they changed the guard quite quickly, actually. We didn’t have an entire season of whodunit. I love Barry (Sloane, who played new deputy Zach). I love what he brought to the show. I love what some of the other characters brought to the show. I love Josh (Cooke, who played Deputy Eamonn O’Neill) because I’ve known him for a long time. We did a pilot together about eight years ago. So I’ve known him for a while too. It’s been really great. It didn’t feel very different, to be honest. We all just sort of picked up where we left off (at the end of Season Three). The crew is absolutely amazing. It just felt like home again.

Q: You have a dedicated fan base. What kind of feedback do you get from fans?

Sackhoff: You definitely hear from them on Twitter, for sure. They’re just fever-pitched about the show, which is great. It’s always nice to have a strong, vocal audience. The fan base knows how appreciative we are. I’m assuming they’ve watched (the latest season) twice. Now we need more viewers—people who are starting at Season One and working their way all the way to Season Four. The way that Netflix does it, (viewers) only need a week to catch up. Netflix has got a lot of great new shows. I’m now watching “Narcos.”

Q: Are you a binge-watcher?

Sackhoff: Yeah, with certain things, for sure. I would say actually moreso rather than not because I’m so busy. I’ve been binge watching shows for 10 years; I just didn’t know it, because I’m almost never home. When I was home, I would go to my DVR and watch, like, six episodes at a time. I watched the entire “Alias” series during the my third season of “Battlestar (Galactica).” That was on DVD, but I’ve been binge watching for a long time. Netflix suits my type of viewing style perfectly.

Q: Since you mentioned “Battlestar Galactica,” it was rumored last year there was going to be a big-screen version of the TV series. Have you heard anything more on that?

Sackhoff: I don’t think it’s with any of us (that were on the rebooted series) so I know nothing about it.

Q: You and Karl co-starred in “Riddick.” Is there another “Riddick” sequel in your future?

Sackhoff: God, I hope so. It actually would be kind of fun to go back to that world—to work again with Riddick (Vin Diesel) and Vaako (Urban’s character in the franchise). It could be fun. Go back to the Underverse, maybe. (Playing Dahl) was fun.

Q: Since you’re originally from Portland, Oregon, have you ever been approached to guest star on Netflix’s “Portlandia?”

Sackhoff: They saw the “Battlestar Galactica” episode they did, and I was so pissed off that they didn’t ask me to do it. I wondered, “Do they know I’m from Portland?” And my manager called me because I think I Tweeted something about it, and she said, “Fred (Armisen, the show’s star and co-creator) is on the phone right now. He wanted me to tell you he’s sending gifts over because they did ask you. I didn’t tell you because you had just had your tonsils out, and I knew you would be pissed that you couldn’t do it. So I never told you that they asked you to do it.” Fred felt so bad, he sent me a bunch of stuff from the show. I wear my “Portlandia” sweatshirt everywhere I go. It’s one of my favorite things that I own.

Q: What have you been doing during your hiatus from the show?

Sackhoff: I already finished a movie. I was in Wales for two months. I arrived there two days after we wrapped the last season of “Longmire.” I always try to fit in at least one movie (during hiatus) so I decided to get it done because now the pressure is gone. I don’t have to work again until March. As an actor, you go, “Well, at least I did a movie. I did that and I did this.” So now that that’s out of the way, I can actually have a holiday.

Q: How was it filming “Don’t Knock Twice?” How would you describe it?

Sackhoff: It’s a horror movie, which is pretty cool. It’s more psychological horror than blood and guts. I’m really excited about it. I’m the only American in the movie. It was definitely a new thing for me. It wasn’t something I was familiar with. So it was pretty cool. I’ve been back for a couple of weeks. What does my boyfriend say? He doesn’t believe me that I’m from the United States because of the way I was talking (with a Welsh accent) when I got back home. Now I understand how Madonna turned British after living in England.