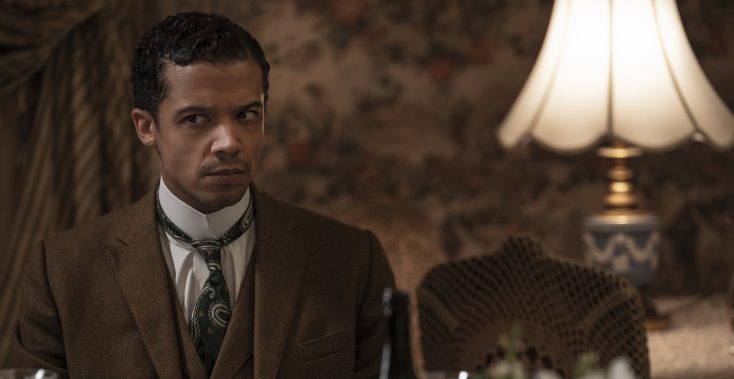 HOLLYWOOD-Based on Anne Rice’s 1976 iconic gothic novel of the same name, “Interview with the Vampire” was made into a successful motion picture in 1994, starring Tom Cruise and Brad Pitt. In 2022, it has become a TV series for AMC, premiering on October 2 at 10 p.m.

The show is set in New Orleans in 1910. British actor Jacob Anderson (“Game of Thrones,” “Broadchurch”) portrays Louis de Pointe du Lac, a black entrepreneur who is lured by the vampire Lestat de Lioncourt (Sam Reid, “Hatfields & McCoys,” “Prime Suspect 1973,”) into becoming his protégé. In 2022, Louis reveals his story to reporter Daniel Molloy (Eric Bogosian, “Succession.”) Even though it has yet to air, the series already has been picked up for a second season.

Q: How far does Season One go in the Interview with the Vampire book?

Rolin Jones: We are going through the first half of the book of Interview with the Vampire [in Season One.]AMC has bought all of the books, [and] wants to make all of [them.]

Q: Jacob, the character of Louis is a streetwise entrepreneur hustler, and fast forwards into the modern-day interview where he has all the eloquence of a poet.  What’s it like to play that?

Jacob Anderson: It’s a dream to play that. It’s the experience of building on a person’s life over a century. That was really fun for me to think about. What books has Louis read? What is he seeing?  Who has he met? Who does he model himself on? Also finding those moments where a person doesn’t really change over a century.  There are little moments that I really enjoyed bringing the old Louis back in. It’s the ultimate acting challenge.

Q: Sam, did you go back and read The Vampire Lestat to get some backstory for your character and why he does things the way he does them?

Sam Reid: Yes. I definitely read The Vampire Lestat and many other books that she wrote with Lestat in them in preparation for the role. It was a fun thing to be able to have this second premise of the second interview to be able to bring more of the Lestat that existed from The Vampire Lestat onwards into the world of “Interview With the Vampire.” So, you get a more nuanced version of him, which Anne certainly developed over 18 books.

Q: I believe Anne Rice much later on stated that Louis and Lestat were canonically queer. But for the show, Louis shouts, “I’m queer” in the second episode. What led to the choice to make the subtext text?

Jones: It seemed pretty obvious to me what the story was here. And when I was tasked with the books from AMC, a number of things they wanted: make it here now, make it big and grand. I came back to them. I said, “I don’t think it’s a horror show. I think it is a gothic romance.” I want to write a very exciting, aggressive, toxic, beautiful love story. And they were down for it.

I don’t think we went much deeper than that. There’s queer sexuality, but there’s queer ethics and queer aesthetics. I’m just trying to work backward from what it is in the late novels as you say they canonize that, and come back and revisit this and go, okay, with the extra time that we have to tell the story, let’s see them really go through all the little obstacles and challenges of a relationship.

Q: Sam, did you get to work with an intimacy coordinator?

Reid: Yeah, we worked with an intimacy coordinator quite extensively. I think it’s important and it treats those scenes a bit more like a stunt scene or a fight scene so they’re properly choreographed, as well as trying to keep some spontaneity in it.  It was fun doing it in that way.  We get to rehearse it and know exactly what was going to happen.

Q: Rolin, can you talk about the humor you infused into what you’ve called a gothic romance?

Jones: Most great dramas have a lot of good humor. And it’s a lot of times structurally [to] set up the really dark stuff. You give them permission to laugh and you put them at ease for a little bit and then you’re trying to subvert that all the time. Almost every single one of these [episodes] does not end with a ha-ha-ha. They all end in dark places.

Q: Jacob and Sam, there will be inevitable comparisons to the movie for those who are steeped in pop culture and in vampire lore to the portrayals of the Lestat, and Louis.   How did you get out of the way of that in your portrayals?

Reid: I love that movie and I love what Tom Cruise did as Lestat. I think he should be loved and remembered for that role, and so I’m never trying to touch that.

It’s a huge honor to take on this extraordinary part created by Anne, but we are doing a different show. We are actually looking at all of her books, so it is a different feeling than what that 1994 film did.

Anderson: I can only agree with what Sam said. It’s a great movie. Brad Pitt is Brad Pitt. I’m not going to try and compete with that. I think he’s a brilliant Louis. But I think this is another thing, and there are things about Louis in this interpretation that are contextual with things and that are reflective of the time. Why compete?   How amazing that all of these Anne Rice interpretations and books can all exist at the same time.

Q: Why are vampires so popular in movies and TV?

Jones: Sam you dressed up like a vampire for 12 years of your life for Halloween. You must have some ideas.

Reid: I was more Dracula, to be honest than Lestat, but I love Lestat.

I think Anne Rice is probably responsible for the reason why vampires are so universally loved. They are the most human monsters. They reflect our humanity back, talk about our darkest desires, and constantly question their existence, why they are here, and because they are motive-conscious demons, who don’t really ever get to die.