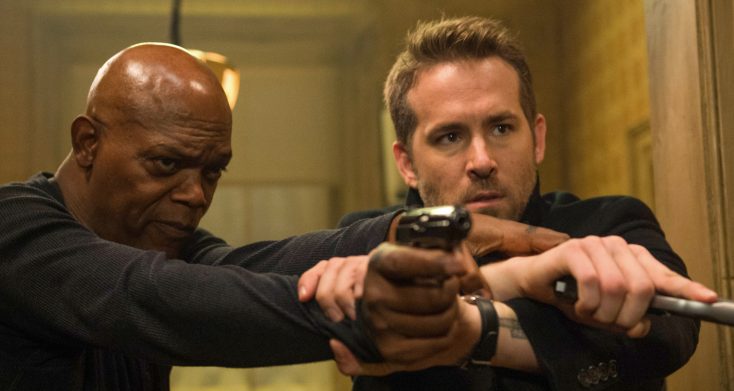 HOLLYWOOD—Ryan Reynolds plays the world’s best protection agent who is called upon to guard the life of his mortal enemy, one of the world’s most notorious hitmen (Samuel L. Jackson). As bodyguard Michael Bryce, he and hitman Darius Kincaid are thrown together for 24 hours of high speed adventure and action to make it to an important court hearing. During their travel from England to The Hague, the duo is involved in a number of high-speed car chases, dangerous boat escapades and tangling with a ruthless Eastern European dictator (Gary Oldman, naturally) who wants them dead. Oscar winner Salma Hayek adds an extra level of madness to the mayhem as Darius’ fiery wife in this action-comedy directed by Patrick Hughes (“The Expendables 3”) from screenplay by Tom O’Connor (“Fire with Fire”).

The Canadian born Reynolds (“Deadpool”), who is married to actress Blake Lively with whom he has two children, recently spoke at a press conference about tackling the action role and co-starring in the buddy comedy with veteran performer Jackson (the “Avengers” films).

Q: You and Samuel L. Jackson have some great chemistry in this film. What took so long for you to get cast together in a movie?

Reynolds: I can’t speak for (Jackson), but I wouldn’t do this without him, so that was my contingency with the studio. I was like, “If you can get Sam to do it I’ll do it.” We met many, many years ago at a fundraiser, and then we did an animated movie together (2013’s “Turbo”), so I knew we’d have this kind of chemistry that would work really well for this.

Q: Both of you are part of the Marvel Cinematic Universe.

Reynolds: I’m in a bastard Fox pig pen, though. They don’t let us play in the real Marvel (world).

Q: This film is slightly reminiscent of the classic action buddy comedy “Midnight Run.” I wonder if there were any classic buddy action comedies that you had in mind going into this that you were hoping to emulate?

Reynolds: (quips) I’ve loved (2016’s Dwayne Johnson-Kevin Hart action comedy) “Central Intelligence” since I was a little kid, so for me that was a big one. No. I grew up watching “Midnight Run” (and) “48 Hours.”

Q: You’re in great physical shape in this movie, so you know what works for your body. Has there ever been an exercise regimen or some terrible diet/exercise plan that you would never do again?

Reynolds: I ran a marathon once. That was the dumbest thing I’ve ever done. I was about eight inches shorter by the time I finished. That, I didn’t like. I hate running. I like sprinting, but long distance running is the worst.

Q: You have a very funny scene in the do-it-yourself store. Do you know your way around a Home Depot and have you been in one since that scene?

Reynolds: Oh yeah, I know my way around a Home Depot. I actually like doing stuff myself. I don’t do it as well as I would like, but I’ve built some decks in my life. I started, like a lot of people, where I had other jobs that weren’t in show biz—some light construction, some driving fork lifts—things like that.

Q: Your wife (Blake Lively) is going to be in an action movie soon. Are you teaching her some tricks? Are you training together?

Reynolds: I need not teach her a thing. She’s got plenty of bad *** on her own. She has more bad *** in her little finger than I do in my whole body.

Q: Do you see yourself fighting against her in a movie one day?

Reynolds: (quips) That’s called domestic abuse. No, I don’t think I’ll be going toe to toe with my wife.

Q: Presumably you’ve had bodyguards over the years. Is there anything you’ve incorporated from your own experience into this film? Does Sam have bodyguards?

Reynolds: I refuse to work with a bodyguard unless he can carry me through a concert, in sort of a fetal position. I don’t know about Sam. I’ve never seen one around him. You have them for Comic-Con or (a big event like that), but I wouldn’t go to Chipotle with security. It just attracts more attention.

Q: Do you wish sometimes you had security with you?

Reynolds: (quips) My (11-month-old) daughter kicked me in the face so hard yesterday morning that I really wouldn’t have minded somebody assisting in the bedroom, just watching out for that. I was in a dead sleep and I got an MMA-style roundhouse to the nose. I would call security in a second. I would lock that child up in a jail cell in Alcatraz and throw away the key (and give her) the ultimate time out.

Q: You have great tweets about fatherhood. Do you think about writing a book or writing a script about that?

Reynolds: No. It’s all meant to be tongue in cheek.

Q: How much improvising did you do in this film? Did you have to limit it and keep it within the scope of the movie, or did you go crazy?

Reynolds: There’s nothing worse than working with a guy that starts improvising and just makes it all about him. You sort of lose the whole (expletive) plot. No, (Jackson) is the most professional guy you’ll ever work with. He and I have a pretty good idea when to hit the gas and when to pump the breaks a bit.

Q: Sam has this beautiful line where he says, “Love. What else is there?” It’s a moment of truth in the film. Is that true for you?

Reynolds: Oh man, yeah. I think so. (Jackson’s) got about 30 more years in his marriage than I do, but yeah, all the body parts are still there, that I can see. Love is everything, you know?

Q: How was working with Salma Hayek?

Reynolds: She turned that role into a mountain. She just grabbed it and knew exactly what to do. I would love to see a sequel that’s just (Jackson and Hayek). Just the Kincaids on vacation. Salma and Samuel on some kind of road trip would be great.

Q: Another strong female character in the film is played by French-Cambodian actress Elodie Yung. How was it working with her?

Reynolds: Elodie Yung is a legend in the making. Literally, there is no part of me that thinks, “Oh, let’s give the guys in Hollywood a chance.” That’s played its course all the way through. I love it. I love seeing that.

Q: You don’t mind getting beat up by a girl?

Reynolds: Well yes. I don’t like getting (beat up) period, but if it’s going to be by someone, it may as well be a girl. That’s fine. I’m surprised Salma isn’t a superhero in the Marvel world. If (Marvel president) Kevin Feige’s reading this …

Q: How would you describe this movie, because it’s hard to define it. Is it an action-comedy, a parody or a little bit of both?

Reynolds: The parody part is important, because it does poke fun at some of the tropes of buddy action movies. It leans in to some of the tropes in a heavy way, and other times we step away from it and deconstruct it and kind of make fun of it. Then other times, it’s just a straight-up buddy action comedy. We’re usurping a lot of expectation with the hitman. With the bodyguard, you look at the Kevin Costner prototype from “The Bodyguard.” My character is just an emotional moron. He’s literally seven years old when it comes to dealing with real life issues and real people and his relationships, so I have a lot to learn from (Jackson’s character) that I seemingly hate, which is a fun.

Q: The success of Deadpool showed the power of keeping the faith. You had the faith in that version of the character for so long and it paid off in a huge commercial way. Has that changed your decision-making process since you had that success?

Reynolds: No. The thing I’ll say is that Deadpool—that entity and that franchise— is that it has swallowed my life whole. I’ve always been so proud of every aspect of it and I’m so passionate about it, and it’s the privilege of a lifetime to be able to do that. I’m only as good as the people I work with, so to work with these incredible writers and this director and all these people, it’s just been amazing.

Reynolds: Well, yes and no. We have a little bit more money to spend just because we have more characters to service. We’re introducing Cable and Domino and everything that they do, so there’s a lot to focus on there.

Q: Is it easier or harder to ensure the sequel will hit the target as big as the first one did?

Reynolds: You can’t look at it like that. Our expectations were so minimal for the first one, and they’re not much different for the second. The studio may think, “Oh, we have to make the same amount of money.” For us, we’re just doing what we do, and we’re in the sandbox playing every day and having a ball.