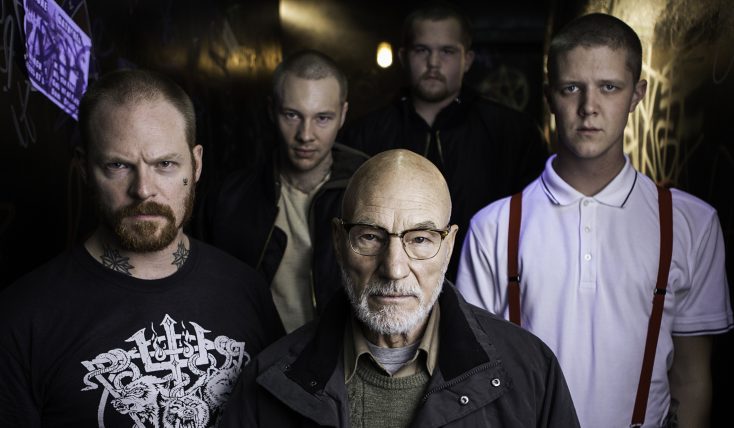 HOLLYWOOD—As a teen living in suburban Alexandria, Va., in the 1990s, Jeremy Saulnier would head across the Potomac River to party at Washington, D.C.’s hardcore punk rock clubs, hurling himself into the pit with other sweaty young friends, inspired by the loud, intense, pulsating music.

“We didn’t call them mosh pits; we were slamming,” he politely corrects during a press conference.

Saulnier recalls seeing neo-Nazi skinheads at some of the downtown venues he attended along with regular punk kids like himself. The swastikas, jackboots and other disturbing hate images would inspire him when he began writing his horror thriller “Green Room” in 2013, while on the film festival circuit with his previous feature, the intense revenge drama “Blue Ruin.”

In “Green Room,” a down-on-its-luck punk band gets booked to perform at an out-of-the way Oregon roadhouse that turns out to be a bastion for a group of hardcore neo-Nazis. The musicians get into a heap of trouble they didn’t bargain for when they witness a brutal murder in the club’s dingy green room (a hangout for bands before and after they perform). When they attempt to leave, the ruthless club owner’s skinhead henchmen detain them. Frustration soon turns to fear, and the young musicians realize they will have to fight their way out if they are going to survive.

Twisted and violent, “Green Room” is Saulnier’s third feature. The cast is led by noted thespian Patrick Stewart, who delivers a performance quite the opposite of the heroic characters he is best known for, namely Captain Jean-Luc Picard from “Star Trek: The Next Generation” and Professor Xavier from the “X-Men” franchise. Bearded and coolly methodical, his Darcy Banker onscreen persona controls a phalanx of vicious white supremacist goons, who are ordered to eliminate all the witnesses to the crime.

Anton Yelchin (Chekov in the new “Star Trek” films), Alia Shawkat (TV’s “Arrested Development,” “The To-Do List”), Joe Cole (“The Secret in Their Eyes”) and Callum Turner (“Frankenstein”) play the band that happen to be in the wrong place at the wrong time. Imogen Poots (“28 Days Later”) plays a member of another band who also becomes one of the targeted witnesses.

Still youthful-looking in his 30s, Saulnier wore a punk rock t-shirt and jeans for an interview in which he discussed making the disturbing horror-thriller.

Q: Talk about casting Patrick Stewart because his character is unlike anything we’ve seen him play before.

Saulnier: I just wanted actors who have a certain amount of craft that can help me tell a very grounded story. His stature is, of course, deserved as a craftsman, but as far as all the other affiliations, this whole film is about shedding affiliation and becoming who you are. Patrick just wanted to try something new and was shaking things up. I benefitted from that time when he was handed (the screenplay for) “Green Room” at the moment he wanted to try something new and a bit nefarious. He was attracted to playing a villain, but not just being a sadistic, evil villain, but to be someone with a brutal pragmatism, that could still be a subtle performance and yet carry so much weight.

Q: How did your background with the punk rock scene shape your characters in this film?

Saulnier: I write intuitively. I try to channel the characters. I don’t want to, of course, add complexity. I like to add different currents as far as who’s doing what and where. But it’s very environmental. The characters I was referring to—for me, they didn’t need a lot of backstory or falsely injected layers. They’re based on real people I know. So there’s not a lot of that typical “band conflict,” because there are no record deals here. They’re not fighting over million dollar contracts. These are people that are in (a band) for the common experience. The shows are kind of pathetic. But it’s also beautiful because these people are performing in front of a crowd of 11. They’re performances are real and the energy is real. That’s what I was trying to capture. It’s not that much of a challenge onscreen to vilify Nazis. It is a challenge to humanize them, and to show them as victims too.

Back in the ‘90s, there were skinheads at every show. What was so repulsive about them was also what made it beautiful. They were there with the Hare Krishnas, the vegan kids and the tough guys from New York and Boston. It was an insanely diverse crowd, and there was violence. The whole idea behind the slam pit is that it’s consensual. It’s an explosive outlet for physicality. That’s what I was looking for. I was like a jock without a sport; I hated organized sports. I wanted something to do back then.

So my idea (for “Green Room”) with the characters was to treat everyone with respect and reverence and, when lives are lost, as brutal as it might be, I wanted people to feel the impact and know these underlings, these neo-Nazi skinheads soldiers, the whole thing is if anyone there could erase that night, they would. They don’t want to be there; they’re forced to. That was the dynamic I was exploring—the complexity of hierarchy and power structure.

Q: What films inspired you?

Saulnier: I definitely referenced war movies. This is a film about tactics. It’s a siege thriller; it’s not necessarily a slasher film but horror fans can latch onto certain elements. It takes place in a concert venue with black lights and graffiti and it looks like a haunted house, and the makeup effects will satisfy any horror fan. But the way I treated the interaction and the violence itself was like a war film. I was referencing “Platoon” and Apocalypse Now.”

When I was giving marching orders to the cast and crew, it was about keeping (the film) grounded. I’d tell them, “We’re making a war film, not a horror movie.”

Q: Talk about making a film where the punk rockers are fighting an authoritarian right-wing group.

Saulnier: Technically they’re ultra-left (wing). These are white national socialists. The whole point is about ideology not mattering. This is actually about soldiers and preserving enterprise. Whatever the marching orders are, what they’re really fighting for is someone else’s enterprise. That is very relevant to today’s culture, and one of the few intentional political undertones of the movie was about hierarchy and power structure and who’s giving marching orders and for what reason, and who is fighting and who is getting hurt. Maybe it’s for reasons that don’t actually benefit them. The punk rock mentality was infused in the entire movie—even how it was made—I wanted to fast-track it, develop it. I didn’t want to over think it. I wanted to shoot this script out and make it exactly as I intended it. So the punk rock mentality is there but it’s also about breaking it down and shedding it and becoming just a human survival story, because maybe your favorite band doesn’t define who you are.

Q: How was it keeping the energy up and working in a confined space of the green room for much of the filming? Did you shoot in order?

Saulnier: It was all in order except for a few things, like the big concert with the extras and some pit bull action but, by and large, it was shot chronologically.

Q: What are some of your punk rock songs or bands that influenced you?

Saulnier: I don’t have a lot of knowledge about the bands because I was there for an experience. Most of the bands I heard in the ‘90s were two-syllable, tough-guy sounding bands, and they’re kind of gone. I’m a huge fan of Minor Threat, Black Flag (and) Bad Brains. I wore this shirt today, Gut Instinct, because they’re a lesser-known Baltimore hardcore band. They’re tough-guy stuff but they were introduced to me by the real Sam (who inspired Alia Shawkat’s character). A lot of the characters in “Green Room” are based on real people and the real Sam introduced me to this band.

Q: This claustrophobic horror movie hearkens to the simplicity of the earlier films in the horror genre. What’s your pitch to people who’ve gotten accustomed to these big monster set-piece movies?

Saulnier: It’s an exercise in downscaling by steering clear of spectacle, artificiality and pyrotechnics. If you make it intimate and relatable, the tension you’ll experience in “Green Room” is 10 times what you’ll experience in any of these big studio franchise movies. You will not only experience real peril but you’ll experience the real elation of survival, which is not to talk (expletive) about “Star Trek Beyond,” which is coming out in July.

I wanted everything to be there. I wanted to build a complete world and what was happening underneath. My rule was the characters have to speak among themselves and not to the audience. You may not get every bit of dialogue shot back and forth but you know the people talking know what they’re talking about. You feel fully immersed in their world so you don’t doubt it. I use catch up so that people lean in so when the shocks come, it’s more effective.