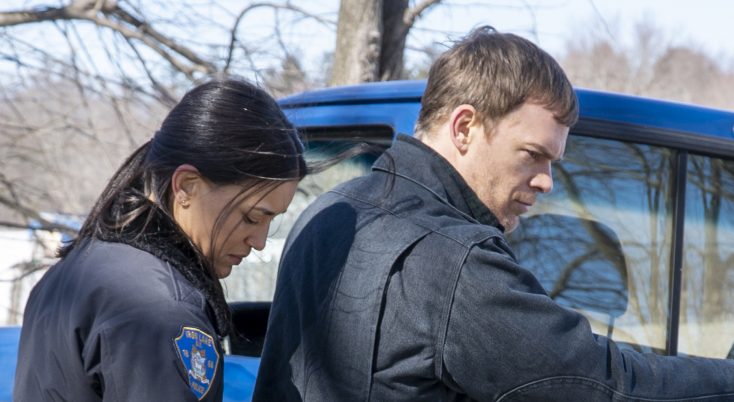 HOLLYWOOD—On Oct. 1, 2006, Showtime premiered a new series called “Dexter.” The psychological thriller starred Michael C. Hall in the role of Dexter Morgan, a blood splatter pattern analyst for the Miami police department, who moonlights as a serial killer. The unusual drama ran for eight seasons. In the final episode it was revealed that Dexter has faked his own death, and was living under an assumed identity, working for a lumber company in Oregon.

Now, 15 years after the original series’ premiere, we get to catch up with Dexter Morgan in a special 10-episode event series, “Dexter: New Blood,” which is produced by the original showrunner Clyde Phillips. Alongside Hall, Jennifer Carpenter also returns as Dexter’s adopted sister, Debra, who in the series’ finale suffered a massive stroke, allowing Dexter’s last act to be a mercy killing, pulling the plug on her equipment to release her from her vegetative state. She now lives in Dexter’s mind.

The story picks up 10 years after the series ended. Dexter has been living a quiet life in the fictional town of Iron Lake, New York. He has a job working at Fred’s Fish and Game Store; but when an obnoxious local hotshot begins behaving recklessly, Dexter questions whether he can continue to suppress his murderous tendencies.

“Dexter: New Blood” premieres on Showtime on Sunday Nov. 7, at 9 p.m. ET/PT. Hall spoke with members of the TV Critics Association via Zoom about returning to his iconic character.

Q: What made you decide that this was the right time to come back to “Dexter?”

Michael C. Hall: It was a combination of things. I think enough time had passed that there were certain storytelling possibilities that hadn’t really been in play earlier on. So, that was a part of it. It also had to do with the fact that we were kind of getting the band back together and that Jennifer was available to come back.

A big part of it was that enough time had passed for Harrison (Dexter’s son) to be of a certain age to be plausibly someone who has the wherewithal to track down his father.

Q: Where has Dexter been the last 10 years? Did you have to fill that in for yourself to see how he got to this new location?

Hall: We don’t spend a great deal of time in a flashback as far as where Dexter’s been. I think we’re led to believe that he’s been somewhat nomadic but are meeting him in this town of Iron Lake, a place where he’s doing more than just existing. He’s actually cobbling together a semblance of a normal life and trying to live one. I think up to this point he’s been probably skirting along the edge of the western to northern border of the country.

Q: Can you talk about stepping back into Dexter’s shoes? Was it hard or did it feel natural? Did you go back and watch some of the original series to prepare?

Hall: I didn’t go back and watch anything. It was somewhat daunting, the idea that this person who you said goodbye to had been in some parallel realm living a life for all these years. They were going to turn the camera back on, and you needed to embody him once they did.  It was scary, and I didn’t know how it would feel.

We shot 119 days, 52 locations. Once we started, we were off and running, and there really wasn’t that much time to check in and assess how it felt, because there was so much to be done. I spent a great deal of time with and as him and felt there were things that are maybe idiosyncratic to the way he behaves, the way he talks, the way he moves. Obviously, he looks a lot like me, but he is a fictional character. So yeah, it was scary, but once we started, he was there to be found.

Q: The Showtime executives have alluded to the feeling they hadn’t done “Dexter” justice with the ending of the series. Did you feel that way?

Hall: I think the way the series ended has a great deal to do with why we’re revisiting the show and the character. A lot of what was mystifying or dissatisfying to people creates the appetite that we’re hopefully satisfying now. The show did not end in a way that was definitive for people or gave anybody a sense of closure. We didn’t hear from Dexter. He didn’t say anything to us when the show ended, and I think it left audiences, if nothing else, (with) a sense of suspended animation. A big part of our motivation was to definitively answer the question of what happened to this guy?

Q: In the first episode of “Dexter: New Blood,” many of the scenes are pretty lengthy. Did you find the length of those scenes to be helpful to you in getting Dexter’s footing for this new iteration?

Hall: Yeah, absolutely. I really liked that (when) the show opened we see him in a very solitary situation, not interacting with anyone other than (a) wild animal and this internalized manifestation of his dead sister (Debra.) And I think that gives a sense of just how isolated he is from the world. I really relished (that) as an actor.

Q: What was it like working with Jennifer again?

Hall: I was so excited about her doing this, because I knew that she would be able to shape shift and come at Dexter from so many different places, turning on a dime. And of course, she did. It was really fun to crack open our sense of his internal landscape. Because it’s much more pyrotechnic and crazy than it used to be.

Deb in the context of this world was coming from everywhere. She’s an internalized character for Dexter. It represents just how far he’s come or how far he’s fallen.

Q: This character has been argued about; whether he’s a vigilante or an avenging angel. He’s so complex it has to creep into your own psyche playing him for as long.

Hall: I know I’m not him, just to be clear. I think to spend this much intense time preoccupied with the imagined life and psychology of a character that’s otherwise just words on a page, there’s got to be some line-blurring that happens. If anything, I’d like to think that playing the character is in some ways therapeutic, in as much as he’s endeavoring to do away with certain things.

I’m not, thankfully, inclined to do what Dexter does, but there are certainly things that I would like to do away with in my world, not just externally, but internally. If I can use this as a way to ritually do that, I’m all for it.

Q: Did you ever think when this show first started in 2006 it was on the cutting edge of what would become a premium TV revolution?

Hall: I definitely in 2006 wouldn’t have flashed all the way to 2021. That’s mind-bending. But I certainly am, if nothing else, incredibly grateful that I happened to catch some momentum or some waves acting-wise and job-wise that coincided with the ocean really churning in the way that it continued to.

I remember that first season it felt like we were in on a secret. And I think we all felt like it would be a secret worth sharing. I certainly had hopes that the show would develop some sort of niche cult following. (But) as far as the breadth and depth of the audience that we ultimately attracted, I had no expectation that that would have happened. But I’m glad it did.