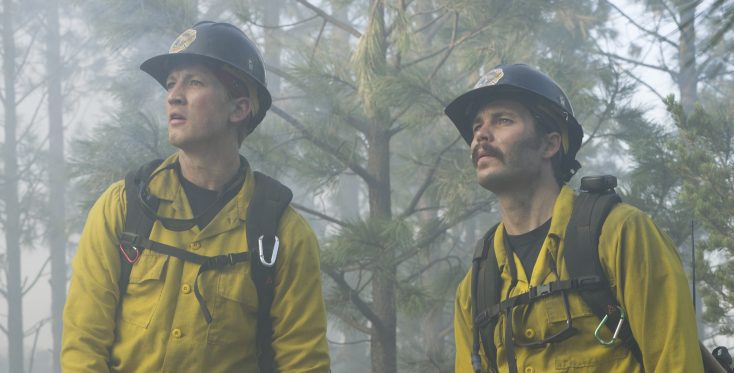 HOLLYWOOD—Four years ago,19 members of the elite firefighting crew known as the Granite Mountain Hotshots lost their lives fighting the Yarnell Hill wildfire in western central Arizona. Only one member of the firefighting team survived, because he was assigned a scouting location apart from the rest of the team. The story of the brave men who gave their lives that on that tragic day in June 2013 is the subject of the feature film “Only the Brave,” that stars Josh Brolin, Jeff Bridges, Taylor Kitsch, James Badge Dale and Miles Teller as Brendan McDonough, the 21-year-old fireman who lived to tell the tragic tale of his fallen comrades and had to overcome “survivor’s guilt” following the blaze that became the deadliest incident of any kind of firefighters since the Sept. 11, 2001 attack at the World Trade Center. The drama is directed by Joseph Kosinski (“Tron: Legacy”) and written by Ken Nolan and Eric Warren Singer, based on the GQ article “No Exit,” by Sean Flynn.

To prepare for their roles, the actors went through Hotshot boot camp. Although some of the more intense fire scenes are computer-generated, those were mixed with actual controlled fires were used on set. Brolin recalls that the heat was so intense at one point that it melted his backpack. The cast went Method by sleeping on the dirt in the desert and the woods without tents during production in New Mexico (standing in for neighboring Arizona).

The filmmakers enlisted McDonough and Pat McCarty, a former Hotshot, to serve as consultants and educated the cast and crew on wildfires.

During a press conference, the actors recalled what it was like making such an emotional film that recreated the tragic events but also sheds light on the dedicated firefighters who regularly put their lives on the line to protect civilians and their property.

Q: Did you guys form a kind-of brotherhood like the real Hotshots when you were filming this on location?

Teller: Yeah. I think I underestimated the physical aspect of the job. I knew it was going to be tough but I wasn’t versed on Hotshot training before I showed up. I had seen some videos but it was tough, man, we were hiking and we shot in Santa Fe, which I also didn’t know was the highest altitude capitol in the country. It’s like 7,500 feet above sea level. We were filming some locations that were 10,000 feet above sea level. Josh (Brolin, who plays Eric Marsh, the crew’s superintendent) was giving everybody chlorophyll. I guess that was something that helps your body, your blood oxygenates better. But it was tough. It was a kick in the gut. I think the boot camp, as far as a cast rehearsal goes, I don’t think anything brings you closer together than collective suffering. It didn’t matter if it was somebody’s first movie because they looked like the actual guy or you’re Josh. Josh had an open-door policy and he really was the catalyst and energy behind this. He was our leader, top of the call sheet and he just carried that through the whole production. It was such a wonderful experience. I think anybody you talk to that was involved would echo that.

Brolin: There’s a lot to that but it’s such a personal experience what we went through. To talk to (the press) about it, we want you to think we went through hell, in order to become a Hotshot but the truth of the matter is, it’s like what Dwayne Steinbrink (Bridges’ character) said at the end, “You’ll never be a Hotshot but we’re glad that you guys represented.” He made that very clear and it was nice to get that honesty from somebody who was there and trained these guys but I think, as actors, we put ourselves in a situation where there was no comfort. It was very uncomfortable and I made sure that it was as uncomfortable as possible. There were no laggards. There was no entitlement. Everybody had a lot of respect for the story so they were willing to give 150 percent and it was great.

Q: What was the one thing you wanted to make sure you captured about these real people?

Kitsch: To go back to the training as well, to have Pat and Brendan there, it really is, to me, a small percentage of why we’re there. Serving (the character I play, Chris) MacKenzie and Steve and Marsh and McDonough and these guys, it’s a responsibility that I think all of us absolutely loved and were honored by. That’s where that communal comes in, where everybody goes through their own fear of wanting to make people watching MacKenzie or Marsh that didn’t know them, know who there are after this movie comes out. It’s our responsibility to show that story. Yeah, there’s that responsibility and I that’s what drives you as an actor, a storyteller with Joe. Having this relationship with Brandon and having him with me talking about MacKenzie was invaluable and sharing laughs and going through that whole full spectrum of that as well is why you do it.

Q: What was your favorite part of working with this cast?

Kitsch: We’re very lucky obviously to be in this craft and this job. I wasn’t exposed to these Hotshots. I didn’t know. To have these opportunities to breathe life into MacKenzie and meet this dad and have that relationship that I have with him now but also to learn these trades, to go in and work with these guys that have real jobs and sacrifice on a real level, that was something that hit me over the head when I was doing this. We had a great time going to work with these guys up in the mountains with Joe (Kosinski, the director). We did have a lot of laughs and so did (the Hotshots). You don’t want to forget about that either. In the worst of times, the worst scenario, these guys are literally laughing. That’s just how you deal with it sometimes. I’d say there’s a bunch of good memories.

Q: What was your biggest concern in bringing your character to the screen?

Bridges: Everyone in the company wanted to do justice to the tale that we were telling. It’s invaluable to have people who actually went through that onboard. Brendan was there just about every day. Duane, the fellow I play, was there often. He came out to my place and spent a couple of days helping me figure out my costume and talking to me about the emotions he was feeling.

When Joe invited me onboard, one of the things I couldn’t believe, was that Duane also is a singer (like me), and has a band called The Rusty Pistols, and we’re going to put that in the movie. So, Duane came out and we jammed together. There’s nothing like music to bring people together. My friend, T Bone Burnett, ended up producing the song that I sing in the movie, and we used the real Rusty Pistols as the band in the movie.

Q: What previous knowledge did you have about Granite Mountain Hotshots and this horrible tragedy? Were you aware of what happened to them before you signed on for your role?

Brolin: Yeah, I knew about it because I basically grew up in a firefighting community. I became a volunteer Wildland firefighter when I was 21. Even though I was working (as an actor) at the time, I didn’t tell production that I was a firefighter. I preferred spending time with firefighters more than actors. I spent three years in Tucson working with that community. So, it meant a lot to me (to play Eric Marsh) and I know a lot of firefighters who went to the funeral (for the Granite Mountain Hotshots victims).

As an actor, you want to be involved in a story, when you choose a movie, that resonates. Playing Cable (in the comic book movie “Deadpool”) is fun, but this is something different. It becomes very personal. I think it was very emotional (to make this film) for everybody involved. Everything was forward moving, and there’s something wonderful about that.

In conjunction with the release of the film, the filmmakers are urging audiences interested in supporting the firefighting men and women who put their lives on the line to consider making a donation to The Granite Mountain Fund: https://www.granitemountainfund.org.