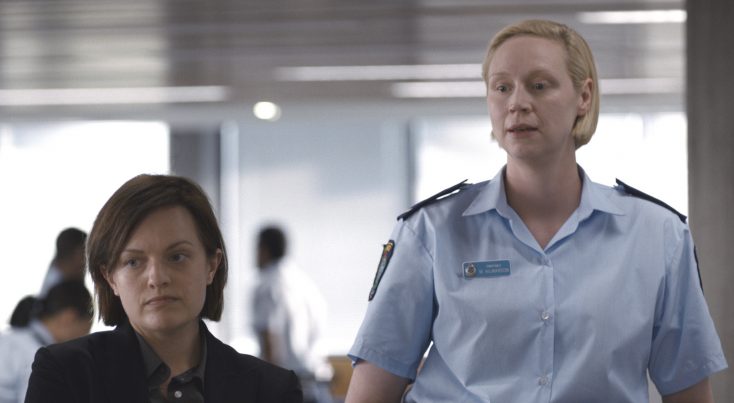 HOLLYWOOD—Proudly standing 6-foot-3-inches tall, British actress Gwendoline Christie has portrayed an array of unique characters, notably loyal warrior/protector Brienne of Tarth on “Game of Thrones,” and Captain Phasma, one of the main antagonists in “Star Wars: The Force Awakens.” Now she’s ready to show audiences her vulnerable side as she plays Miranda Hilmarson, an Australian rookie constable (police officer), who is paired up with a much more experienced officer on the force, on “Top of the Lake: China Girl,” airing on SundanceTV.

The second season continues the story of Jane Campion’s critically acclaimed “Top of the Lake” starring “Mad Men’s” Elisabeth Moss as Detective Robin Griffin, that aired in 2013. In this six-part season (series, as they call it in Britain and Down Under), Robin returns from her remote New Zealand hometown to her home base in bustling Sydney, Australia to rebuild her life after catching a child predator. When the body of a young Asian woman washes up on Bondi Beach, Robin, along with her new partner Miranda (Christie), lead the investigation into finding her murderer.

Written and directed again by the Academy Award winning filmmaker, “Top of the Lake: China Girl” premieres on SundanceTV on Sunday Sept. 10 (and can be viewed on Hulu the next day).  Christie enthusiastically discussed her role on the series at the TV Critics tour.

Q: Can you tell us a little about Miranda?

Christie: What Jane (Campion) did was very interesting from my perspective. I’m not convinced it was hers. She created a character, a police officer, who instead of being strong and having an incredible moral compass to somehow transcend any obstacles, she is a woman that is intensely vulnerable and extremely raw. She makes decisions based on an emotional basis, which often results in complications. She is ultimately failing at life. She doesn’t have strong, functioning relationships with the people around her, if many relationships at all. I don’t think we’ve really seen a character like Miranda before, because she’s such a mass of chaos and conflictions and she’s quite out of control.

Q: Had you met your co-star Elisabeth Moss before you started shooting?

Christie: The first time I met Lizzy was our very first day of work together when we were in rehearsal. I was a huge fan of the first series of “Top of the Lake,” and I thought that Lizzy’s performance was truly exceptional so I couldn’t believe my luck to be in the next series, and I made sure I was prepared, because I didn’t want Elisabeth Moss to feel she was dealing with any kind of slouch. We did this improvisation with Jane, and I felt an exquisite trust and bond with Lizzy immediately. At the end of the scene, Jane loved it. We wrote it down, and it’s pretty much in the show. It’s one of the best working relationships I’ve ever had.

Q: Were you looking to play a role who was a bit lighter than your character Brienne in “Game of Thrones” and Captain Phasma in “Star Wars?”

Christie: I’ve been enormously fortunate to play those two brilliant parts, but I was really looking for a challenge and looking to do something different. I spoke to Jane and I said that I would like to be taken out of my comfort zone. I certainly was, because I was given a character who is intensely vulnerable, intensely emotional.   She has a very open heart and a wonderful sense of humor, but she doesn’t have a lot of success in her life, either professionally or personally, and so to explore something raw, particularly because Jane deals in reality, was what fascinated and interested me.

Q: How do you feel the strong female roles on shows like “Game of Thrones” and “The Handmaid’s Tale” have benefited TV?

Christie: When I first started on “Game of Thrones,” around 2011, I remember reading the books and thinking, “Gosh, these are really unconventional narratives and it’s so fantastic that these women are at the forefront. I’m sure when it comes to the TV show they will reduce those parts.” Traditionally, it is the men that are at the forefront, and when I saw that is not what happened, they maintained that, I was really heartened. I feel that has been something of a platform which has encouraged a greater popularity of women to be at the forefront of mainstream drama. I feel like we get to see a different side of life.

Q: Was it nice in this not to be in armor with a thousand special effects?
Christie: I was definitely relieved to have a break from armor. Armor has been a focal point of my working life for (many) years now. I was just delighted to have a bigger role. That’s what I’m really hoping “Top of the Lake” will do for me. That it will show (my) capacity taking on larger roles, and particularly more complex roles. That was always what my interest was when I was in training. Drama school feels like a thousand years ago.

Q: What would you like people to know about “Top of the Lake: China Girl?”

Christie: That it is a truly complex series, which I feel even transcends the traditional television format and subverts the very nature of what a TV show is. It explores things that we are not used to exploring in terms of misogyny, femininity, motherhood (and) what it is to be a woman. It explores many different aspects of human relationships. I was so thrilled that one of the central themes is this relationship between (Robin and Miranda) and how that evolves for my character. I can’t wait for (viewers) to see it.

Q: In “Star Wars: The Force Awakens” we really didn’t get to know Captain Phasma. Now that you’ve learned a little bit more about her, how does that feel to discover what’s under that exterior?

Christie: I was just so delighted to be in “The Last Jedi” (“Star Wars: The Last Jedi” is scheduled to be released Dec. 15) and for that film to be directed by Rian Johnson, who’s another director I’ve long admired. I thought his movie “Brick” was a really brilliant piece of work. When I met him, it was a huge thing for me. Rian invited me to read the script, and then to come and discuss it with him, as he did with all of the cast members. I was really thrilled to have the opportunity of a forum where I could put my ideas forward and have some back and forth about where we felt things were, and where we felt they could go. What I can tell you about the next “Star Wars” film is that I think Rian does an exceptional job of going deeper, of going further and really exploring what these relationships are.

“Top of the Lake: China Girl” premieres Sunday Sept. 10 on Sundance TV, and will be available Monday Sept. 11 on Hulu.