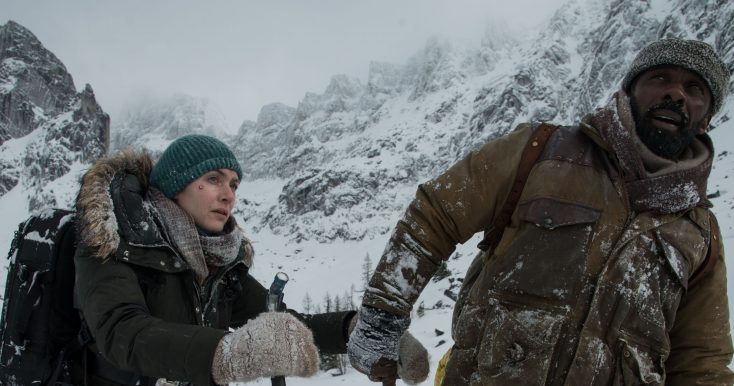 Director Hany Abu-Assad and Composer Ramin Djawadi at the scoring session for THE MOUNTAIN BETWEEN US. ©20th Century Fox. CR: Bret Hartman.

HOLLYWOOD—As she did three decades ago in “Titanic,” Oscar winning actress Kate Winslet (“The Reader”) plays a character that once again is immersed in freezing cold water, clinging to life, hopeful of a rescue. Only this time, in “The Mountain Between Us,” her character is battling the elements in a high altitude rather than shipwrecked in the middle of the ocean.

Based on the Charles Martin novel, the drama centers on Alex, a young woman headed east to her wedding. When her flight aboard a passenger jet is canceled, she and another stranded passenger (Idris Elba) hire a private plane to take them to their destination. Bad weather isn’t the worst of their problems when they reach 10,000 feet, and soon the strangers (along with the pilot’s dog) find themselves stranded on a remote and unforgiving mountain without any way of communicating their location to the outside world. Their best hope is to wait for a rescue, but staying inside the wreckage could spell more trouble than venturing out into the wilderness in search of help.

The adapted screenplay by J. Mills Goodloe and Chris Weitz is directed by Palestinian filmmaker Hany Abu-Assad who previously helmed the Oscar-nominated “Paradise Now.” As he was putting the finishing touches his first Hollywood studio film, the amiable filmmaker spoke about working with his two acclaimed stars, shooting on location in Alberta and British Columbia and how he was overruled when he wanted to kill off one of the characters.

In its opening weekend, the romantic drama set within the backdrop of a vast mountainous wilderness, earned $14.1 million globally.

Q: What was it like making this film and how would you categorize it? Is it a drama? A survival movie?

Abu-Assad: This is my first experience with a studio and it was a pleasant experience. This film is a survival story but it also explores big ideas such as what is important in life: is it surviving or is it each other or is it something else? It’s not preachy (but told) in a very accessible way.

Q: How easy was it convincing Kate Winslet to get into the icy lake?

Abu-Assad: Kate wasn’t the problem; the problem was the team because there are all kinds of security people and insurance. So, the problem wasn’t the water itself because she could be protected by a waterproof suit. The problem wasn’t when she was in the water but once she leaves the water, 10 seconds later she would have become an ice-block. So, we had 10 seconds to get the shot. We had to do that three times. And every time we did it, we then would have to get her back to the tent to re-dress her before she froze and keeping her warm until she was ready to go again. The 10 seconds started the moment she went underwater. Then Idris has to put his hands in to find her and pull her up. It isn’t easy.

Q: Where did you shoot that?

Abu-Assad: In Canada. It’s a real river but you can’t use real river water. So, we had to build a tank within the river so we could control the water, so (Winslet) wouldn’t go under. That would have been too dangerous. We built it in September, four months before (production started) the water froze.  It was a very very cold environment. Some days, I couldn’t move my facial muscles. Sometimes, I couldn’t open my eyes because it was so cold.

Q: How long were you in that environment?

Q: How about the underwater shots?

Abu-Assad: We shot that at the studio.

Q: How high up were you?

Q: How long did it take to acclimate to that altitude?

Abu-Assad: We couldn’t stay more than six hours because beyond that, your chest feels like it’s burning. You feel like you’ve been running for six hours because of the lack of oxygen. We also couldn’t fly to the mountain if it was windy or if there were clouds or if it was dark. We had to have clear weather to go up 11,000 feet. Every day we would wait for the forecast to know if we could go up (the mountain) or not.

Sometimes, when we were up there and it was clear, a sudden cloud cover would appear so we couldn’t fly back down. So, we had to bring eight days of supplies for 50 people (cast and crew). So, first we’d take up all the supplies and then we’d go up. Otherwise, it would be dangerous.

Q: Did you ever get stuck up there?

Abu-Assad: One day we had gotten the all clear to go up. It was me, the DP, the line producer and the first AD. We were in the helicopter and suddenly saw the clouds coming towards us. So, we had to turn around and get down fast because the clouds were right behind us. That day I felt like, “What am I doing here? Is it worth it to have this experience?” Somehow, I feel like in films like this, when you take a risk, you, as a director, the cast and the crew, will give their best. We all felt like a team and doing something more than usual.

Q: Why did you choose to shoot in such difficult conditions? Why not set it in a desert?

No one has made a survival movie like this in these kinds of conditions. There was one movie called “Alive” and “Everest” but they didn’t contain a love story. It felt like this challenge would give the movie a look like you’d never seen before. The fact that you can take a survival story to explore human ideas like the meaning of life, to me it’s very original. I loved the combination of snow and survival.

Q: What was it like having the dog in this already logistically complicated production?

Abu-Assad: The dog had two trainers, the owner and a representative of animal protection to make sure we didn’t push the dog too hard. Sometimes when he was cold and refused to stand on his mark, we’d have to wait. I suggested that we kill off the dog (character) but the studio said, “No way! We’ll fire you, but not the dog.”

Q: The action revolves around these two people. Why did that appeal to you?

Abu-Assad: I felt like it was a play and the stage was the whole environment of the mountains. It also was a challenge because with just two characters, how are you going to create tension. Usually there’s a third character that creates tension to create this conspiracy—two against one.

Q: Was it always going to be Kate Winslet and Idris Elba as your stars?

Abu-Assad: (Producer) Peter Chernin thought of Idris. The moment he mentioned him, everybody, including me, felt like this is going to elevate the movie because it’s going to be a color-blind love story for the first time in Hollywood. Usually, when you have a love story in a Hollywood movie, their race is an issue. We don’t have an issue at all in our story because it’s not written as an issue.

Q: Your couple are adults in their 40s, not youngsters. Did you think of making them younger?

Abu-Assad: No. Dramatically, it’s more interesting to have more mature characters that explore the meaning of life in a poetic way. Secondly, I don’t recall I movie that I want to see on the big screen. This is a movie for grownups because most of the movies made today are for teenagers.

Q: Did you take the actors up to the location before you started shooting?

Abu-Assad: No. They said they wanted to feel like there was no way back.  They’re not prepared for (the journey) they go on. Their first day of shooting was the first day they were up in the mountains. They hadn’t been there before. Kate actually said to me when we got there, “If I knew how dangerous it was, I wouldn’t have agreed to do it.” But we made it very safe. Every step she took, somebody else took it before her to make sure there weren’t any holes for her to fall into.

Q: Was anyone on the crew familiar with wilderness survival?

Abu-Assad: The location manager was experienced and he prepared us for the shoot. We were like a well-oiled machine. We were on schedule.

Q: There’s been some talk about Idris Elba being the next James Bond after Daniel Craig does the next 007 film. What do you think of him playing the iconic British spy character?

Abu-Assad: I’d love it. And I’d love to direct him in it.