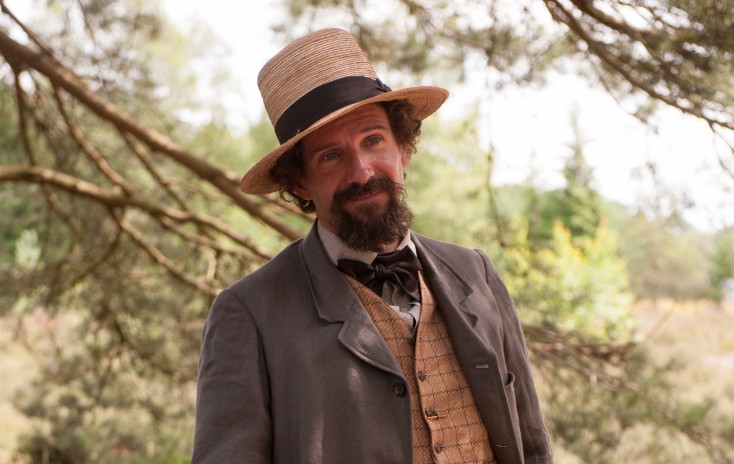 HOLLYWOOD—Veteran actor Ralph Fiennes found out just how challenging it is to simultaneously star in and direct a film when he brought Shakespeare’s tragedy “Coriolanus” to the screen in 2010. He was adamant he would never do both again. But as the old saying goes: never say never. Subsequently offered the opportunity to direct and star in another big screen adaptation—Claire Tomalin’s bestseller “The Invisible Woman”—he hesitated only briefly. After all, how could he resist telling the story of one of the literary world’s beloved and enigmatic figures: Charles Dickens?

The stage and screen actor, best known for his terrifying role as SS Officer Amon Goeth in “Schindler’s List” and as evil Lord Voldemort in the “Harry Potter” franchise, says he didn’t know that much about the author, other than a passing knowledge of his famous works. He knew nothing of his personal life, which included a little-known affair with a young actress.

The meticulous performer delved deep into the writer’s life, not only using Tamalin’s carefully researched book as the main source, but also poring through Dickens’ journals and more to create a character who was brilliant and publicly beloved and yet privately controlling and emotionally isolated. He plays the celebrated author at the prime of his career, adored by legions of readers. Like a modern day celebrity, he could barely walk the streets of London without being stopped by admirers and fans.

Young Nelly (played by British actress Felicity Jones) arrives with her mother and sisters to perform in a play directed by and starring Dickens. The middle-aged married author is instantly smitten with the teenager, and pursues her recklessly. Although Nelly admires Dickens’ work, the thought of becoming his mistress concerns her. She fears she will have to live a lonely life, hidden away from the public eye, and be forever at his beck and call. Her mother (played by Kristin Scott Thomas, who co-starred with Fiennes in “The English Patient”) also is wary of her daughter becoming “an invisible woman.” But the heart wants what the heart wants and as Dickens and Nelly grow closer, the whispers of Victorian society become louder, and the fears of those near to them intensify. A train accident threatens to expose their secret relationship and a heartbreaking decision must be made.

Fiennes, 51, recently spoke about returning to the director’s chair and exploring the man who addressed the societal inequities of his day in books like “Great Expectations,” “Oliver Twist,” “David Copperfield,” “A Tale of Two Cities” and, of course, “A Christmas Carol.”

Q: Why were you hesitant to take this on?

Fiennes: Yeah, only because having (directed and starred in) “Coriolanus,” I knew it would be very very difficult. It was thrilling in many ways and was great but it also was very challenging. I was sent this script and I was asked if I’d consider directing. I wanted to play Dickens but I was cautious and a bit reluctant. I could see Dickens was a great role. I loved it but I was uncertain that I wanted to go in there again, and go into the ring myself.

Q: Was there someone you could rely on to give you feedback?

Fiennes: Absolutely, you can’t do that thing where you wear two hats unless you have someone there. With “Coriolanus,” I had a great dialect coach named Joan Washington. I’ve known her since I was at drama school. I think she’s brilliant on performance and providing insight into the truth of a performance. Once I decided I was going to do “The Invisible Woman,” the first thing I did was call her.

Q: What did you know about Dickens when you started this and what did you learn in the process?

Fiennes: Initially, I was ignorant about Dickens. I didn’t know much about him. I was familiar with the adaptations and I’d read “Little Dorrit,” but I was kind of drawing a blank on him. It wasn’t that I wasn’t a fan; I just didn’t know enough to know if I was a fan. But it was reading the script, almost in synch with reading Claire (Tomalin’s) book—her book so arrested me—her description of actresses in 19th century theater and Dickens himself—that I kind of had a wake up call about it. Then, I thought he was a brilliant complicated man with different emotional extremes, and I knew so little about him. On the one hand, he was this vital, socially gregarious, furiously active man. But he also was a controlling father and very self-oriented. I think his work ethic was sort of frightening and brilliant and nobody could keep up with it. He was driven by his sense of injustice as a child. His father was heavily in debt and was made to work in this small blacking (shoe polish) factory. It was a small workshop on the banks of the Thames, and I think he felt humiliated by this. I think he was about 9 or 10 at the time, but he carried this sense of humiliation all his life, and he had this fury about it. He was someone who was quick to feel slighted but at the same time he could be a very loyal friend. One of the great things in researching this is that Dickens is his letters because I got a great insight into his fastidiousness and attention to detail, his thoroughness about things. He organized family events and games and things with a lot of detail.

Q: What surprised you in the research you did on him?

Fiennes: I think he felt this rejection and was becoming successful and he though, “I should have the family, the house, the wife—and he made a beeline for Catherine (the woman who became his wife). I think there was affection there. But I think he was a bit like someone who wants to play the role of “I am a successful writer and now I’m going to have a pretty wife and the home.” I don’t think there was much self-examination. I don’t think there was much in Dickens. We’re used to a time of self-examination. We’re in the age of the shrink and talking to people about our problems. I don’t think that existed at all. That awareness was lacking quite a bit, so he lurched into this marriage, he was affectionate and attentive. Interestingly, this weird thing happened, which the young Catherine Dickens had a sister who died one night suddenly in her late 20’s, early 30’s. She was very young. They had gone to the theater and she had collapsed. She was living with Dickens and Catherine when she died. Dickens’s remorse for her was weird. It was extreme. It was as if his own wife had died. And all the biographies comment on his extreme grief for his wife’s sister. So they even speculate was he in love with his sister-in-law more than his wife. So there is a sense of emotions displaced; nothing has connected for him at a profound level. I think Nelly was it for him. She somehow came into his life and that was the big love of his life.

Q: Was it inspiring for you as an artist to see a man who sometimes says the more you think the less you do? Was your approach more gut (to directing and acting)?

Fiennes: It certainly helped in a funny way, because I had finally decided to take on acting and directing and there is a point where you can’t analyze too much. There’s a kind of heady adrenalin which kind of takes over and it kind of bled into Dickens. You’ve just got to make decisions. You just have to go! The worst thing on a film set is that you stop to sort of ponder. And there is something to be said for it. Of course there are times where you need to think, I can see that that can be quite addictive, because you just have to go, go, go.

Q: How did Charles Dickens deal with the celebrity—being famous and being admired by these actors and being mobbed by people in public?

Fiennes: I think he loved it actually. I think he was defined by his relationship with his readership. He was the like the successful cable TV series of the day. He was the sort of the “Breaking Bad. “Everyone was addicted to what he was going to come up with next. It was Dickens. His work was written in installments. So Dickens was writing for a readership/audience and he was very much concerned if his books sold. He had a storyteller’s insistence—he holds his audience. He was a gifted actor/speaker and when he read his works for an audience, from what I read, it was fantastic. Famously, he would read (the section of “Oliver Twist” about) the murder of Nancy by Bill Sikes. People in the audience were fainting because of the way he acted the violence of Bill Sikes.

Q: He went public with his animosity for his wife with an article in a newspaper. Today, a celebrity might Tweet this kind of dispute.

Fiennes: No I don’t, but I’ve seen reactions people have to comments on things.

Q: In your personal life, would you rather not go public about someone or something that’s troubling you?

Fiennes: I would express an opinion, yeah, but I hope not in a crude way.

Fiennes: I’m never going to know am I? (He laughs.)

Q: Would you say there was any indication that Dickens felt remorse about the way he treated her?

Fiennes: I do feel that.

Q: Do you have an opinion on his treatment of her?

Fiennes: Yeah, I think it is difficult and painful that you have to make all these accommodations and interior compromises with the way of life you’ve chosen and that you’re going to have to wait. You wait for the phone call and the day that you plan isn’t going to be because he has to do this or that, so it must be very… I would find it really hard if I were the other man.

Q: A totally unrelated question to this movie: do kids identify you as Voldemort in public?

Fiennes: No. I don’t really look like him. But sometimes their moms do. (He laughs.)