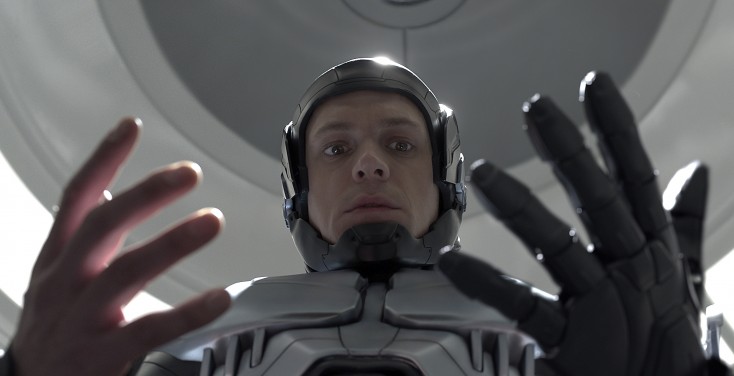 HOLLYWOOD—Joel Kinnaman was only seven years old when Paul Verhoeven’s cautionary sci-fi drama “RoboCop” came out. It was an iconic film for this Swedish-American actor, so when he heard from his agent that the film was set for a reboot, he thought he would be interested in watching it as a viewer, but worried it would be tricky as an actor to step into the big steel boots of Peter Weller, who played the original half-machine, half-human police officer in the 1987 version.

What changed his mind was hearing that Brazilian filmmaker Jose Padilha (the “Elite Squad” films) was going to helm the update. Kinnaman, who had starred in the Swedish thriller “Easy Money” and the acclaimed independent romantic comedy “Lola Versus,” figured it would be a risk worth taking in capable hands.

The tall, blond actor, who bears a striking resemblance to a young Keith Carradine, says he was game to tackle the role. Set this time in the year 2028, Kinnaman, 34, plays Alex Murphy, a loving husband, father and good cop doing what he does best—trying to stem the tide of crime and corruption in Detroit. When he is critically injured in a criminal attack, executives from a company called OmniCorp, a robot technology firm, convince his wife (Abbie Cornish) to allow them to save him by replacing the destroyed parts of his body with robotic technology. OmniCorp has more than altruistic motives. There’s a fortune to be made selling robots with a human brain to the nation’s law enforcement agencies. But the greedy tycoon (played with cool menace by Michael Keaton) behind the project didn’t consider the fact that there is still a man fighting inside the machine.

Dressed in a sporty black jacket, black shirt and slacks, Kinnaman, who speaks perfect English even though he grew up in Sweden (thanks to his American dad), spoke about stepping into the iconic role and playing an American hero.

Q: Every role presents different challenges. Could you talk about the challenges that you faced in this role, in particular dealing with the costume and what all that entailed?

Kinnaman: First of all, it was a bit of a challenge to put on this suit. The first time I put it on we were out at Pasadena (Calif.). It was a hot day in LA. It took an hour and 45 minutes to put it on and it was so uncomfortable. It was digging everywhere, pressing down in my shoulders and I was just sweating like a pig. After 20 minutes, I said, “I’ve got to get out of this.” Then I was thinking to myself, it was a daunting idea that I would have to wear this for 14 hours a day for 5 months. Actually the suit became one of the first seeds that led my imagination into the vulnerability that Alex Murphy felt after he became RoboCop. It was an interesting contrast, because he’s got this body that is so powerful, but he feels very uncomfortable. He’s amputated from his throat down. He doesn’t know who he is anymore. My little level of uncomfortability sort of led me to think of what Alex might have felt times a thousand. I was surprised to think that the suit that should make me feel so powerful actually made me feel vulnerable. That was interesting.

Q: What were the physical challenges for you?

Kinnaman: The difficulty was that for many of the most emotionally demanding scenes, I had to be completely still. Especially in the scene where I wake up and Dr. Norton (Gary Oldman’s scientist character) reveals what’s left of me. If you think back to the moments when you’ve gone through the most pain in your life or the most severe anxiety, your body is very much involved in that. Your body is experiencing emotions. So when we, as actors, try to go and access those feelings, the body is a great tool to use. You clench your stomach or you do something physical. So that sort of helps your emotions along the way. In this instance, I didn’t have that luxury, so there was that little higher level of difficulty. What helped me out during most of these scenes was when I was looking into the truthful eyes of Mr. Oldman. That would always help. But that was one of the difficulties of wearing the suit.

Q: How was it wearing the mask?

Kinnaman: I got no sympathy from Michael Keaton (who wore a mask in “Batman” and “Batman Returns”) when I got my suit. He was like “Shut the **** up! You’ve got it easy. They had to glue on my skin!” There was a lot of gloating (by Keaton). A lot of gloating. (He laughs.)

Q: Did you adopt any sort of physical regimen either to wear the suit or for any sort of action choreography? Did they give you a part of the suit to take home as a souvenir?

Kinnaman: I did get the guns that I have on a frame at home. I was very happy about that. After putting on the suit for the first time and felt how taxing that was going to be, I realized that I would have to be in good shape. There wasn’t going to be much time to train while I was shooting because it was going to be long days. We also discussed the programming and the software behind RoboCop’s movement patterns, like when he was in battle situations. Our idea of that was that it would be more like Special Forces. I was hoping to do most of those movement scenes, so I trained with Swedish Special Forces for three weeks. I worked with some guys that I trained with previously for other projects, and I also trained with the L.A. S.W.A.T. team.

Q: The original “Robocop” has a special place in pop culture and cinema history. What were your initial thoughts when you first heard about a remake? Did you have any second thoughts about doing it?

Kinnaman: When I got a call from my agents and I heard that there was a movie of “RoboCop” being remade, my initial reaction was that I might see that in movie theaters, but I didn’t think it was a great fit for me, at least where I was at the time. And then I found that Jose Padilha was going to direct it. I’ve seen his (“Secrets of the Tribe”) documentary and his two “Elite Squad” movies, and that completely changed my perspective of what the possibilities of a remake could be. There are a lot of wrong reasons why you would make a remake, and there are some good ones. When I heard that Jose was going to direct it, I was pretty certain that it was going to be one of the good ones. I sat down with him and he told me the vision of the story he wanted to tell. I thought it was a brilliant idea. It’s human nature in many ways that we retell our favorite stories. In the theater, we do that all the time. I’ve seen four different versions of “Hamlet,” and every one of them has given me something different. In this case, it feels like in 1987, when (the original “RoboCop”) was made, it was a futuristic vision that felt very much like fantasy. It was an incredible film. But in 2014, the technology has had an exponential curve and we’re so far into the future. In 1987, we couldn’t imagine where we could be right now. For us, where society has come today, the concept of “RoboCop” really made sense to revisit, because it was one of those great opportunities where you could meld a big scale exciting action movie, but at the same time get the opportunity to get some very interesting philosophical and political questions answered.

Q: The original “RoboCop” had some memorable lines of dialogue, which you get to recite in the film. How did it feel to actually say them?

Kinnaman: There were a couple of (earlier) versions of the script where so many of the catchphrases were in it. We had a discussion about it and decided we’re doing a reboot of “RoboCop,” but we’re not doing Paul Verhoeven’s “RoboCop.” He’s a film director that I have a lot of respect for, and he had a very specific tone. Jose is a phenomenal film director who has a very specific tone to his films. So I think it would be a disservice and actually disrespectful to the original to sort of keep every line in there. We kept two or three lines sort of as an homage to the predecessor that we love so much, but more than that we felt would be a mistake. It felt pretty cool to say a couple of those lines.