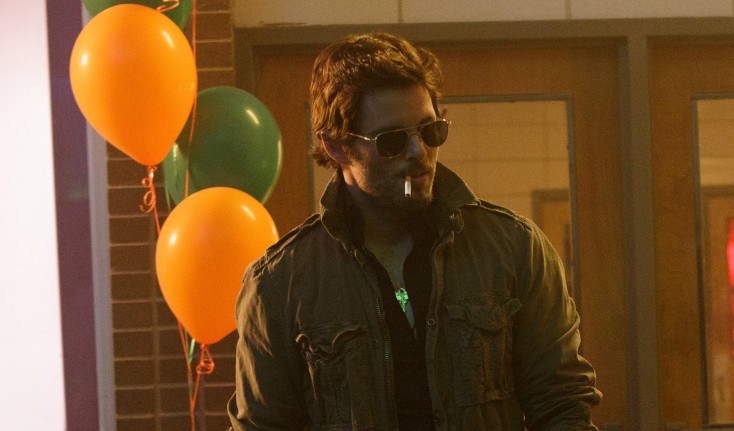 As Oliver, Marsden, 41, plays a guy who is beautiful on the outside but not so much on the inside. Other than starring in a national commercial for a sunscreen product, his Hollywood career is going nowhere. When Black’s character shows up and shows Oliver the adoration he is lacking in his real life, the actor takes advantage of the situation, and then emotionally discards him the next morning.

It’s a departure for the Oklahoma-born actor, who usually plays nice-guy leading and supporting roles. Notably, he co-starred with Amy Adams in the 2007 Disney hit “Enchanted,” in which he played the dreamy Prince Edward. That same year, he also convincingly played a Dick Clark-inspired TV dance host in John Waters musical “Hairspray.” He was a worthy rival to Ryan Gosling for Rachel McAdams’ affections in the tearjerker “The Notebook.”

Fan boys (and girls) most likely will recognize him as laser-eyed mutant Cyclops (a.k.a. Scott Summers) in the boffo “X-Men” franchise.

Born and raised is Stillwater, Okla., Marsden knew from an early age he wanted to be an entertainer. While he was still in high school, he was recruited to co-host a local TV news program called “Good Morning, Oklahoma!”

Bryan Singer cast him in “X-Men” as the mutant Scott Summers/Cyclops, who has the unique ability to emit powerful energy blasts from his eyes. That 2000 worldwide hit put Marsden on the map. He has since reprised the role three times in subsequent “X-Men” installments.

Having established himself as larger than life fantasy characters in big studio films, Marsden recently delved into more challenging roles in smaller independent films including the remake of “Straw Dogs” and the heartwarming “Robot & Frank.” He played Tina Fey’s boyfriend on the hit comedy “30 Rock.”

Though he and his wife, Lisa Linde divorced in 2011, Marsden remains an attentive father to their two school-age children, Jack Holden, and Mary James. The actor also has another child, William, with ex-girlfriend Rose Costa, a model.

He recently spoke about his role in “The D Train,” co-directed by Jarrad Paul and Andrew Mogel, working again with Jack Black and the perils of being handsome.

Q: Have you gone to any of your high school reunions?

Marsden: I’ve been able to miss my reunions. I wasn’t against going but I was out of town working or something so I didn’t go. I would have gone but the people I was friends with in high school I still kind of keep in touch with, so it’s less of, “What’s so-and-so doing?” I haven’t been. I grew up in Oklahoma and 20 years later, people look 70. (He laughs.) It’s true. I mean, don’t print that. I’m sorry. I take that back. I can’t label a whole town like that.

Q: This character is very different the ones you’ve played before, so what attracted you to it? Were there specific aspects of the character that you could identify with?

Marsden: I love that both of these guys have their own form of desperation. My guy, who (Jack’s character) looks at like this super-cool James Dean-y success story in Hollywood is actually, sort of, pathetic. Not pathetic, but he’s been run ragged by an industry that hasn’t been favorable to him. I like that element of it—the guy who’s not Colin Farrell, James Dean or whoever, but he so desperately wants to be that guy. That’s what we do as actors, I guess.

Everyone’s looking for their version of validation and someone to feel relevant and Dan (Jack’s character) comes into his life and makes him feel that way, because he brings me back to the days when I was the hotshot in school, so as odd a couple we are, we both provide something for the other person. Whether that’s catastrophic or combustible or not, it’s pretty good comedy, I guess. I just like the character because he he’s cool but he’s also clearly flawed as well.

Q: People seem to inherently like Oliver, but he’s not necessarily deserving of all the attention he gets.

Marsden: No, not really. In fact, in the movie, he only gets attention from Dan and maybe the other guys back in high school. He has to be transported back in time to get attention. Hollywood hasn’t been good to him. But you’re right. It’s not like he’s not charismatic. He’s just too cool for everything. But (Jack’s character) brings him back to that world, and reminds him of his strengths. It’s like, “Oliver Lawless, you were the greatest thing …” He remembers it, and that’s appealing.

Q: Has it ever been a burden to be good-looking?

Marsden: (jokingly sarcastic) Let me tell you! I’ve been dying for that question. It’s the cross I bear. No. No. No. Oh God!

Q: There must be certain expectations of you even before you were an actor, right?

Marsden: No, I just feel like you’re talking about somebody else.

Q: Are you unaware that you’re good-looking?

Marsden: (humbly) Well, yes. Next question. (He pauses.) It’s never been a hindrance. It’s never a strong argument (to say) “You don’t know what it’s like to wake up with these cheekbones.”

Q: Well, let me ask you about your chemistry with Jack. You guys have an intimate scene. So was that at all difficult for you?

Marsden: There are different points of view. You don’t want to give the stuff away.

Q: How did you prepare for your kissing scene?

Marsden: (deadpan) We had chewing tobacco and pepperoni for lunch. That was the last scene of the movie actually. We had some mints.

Q: How was it kissing Jack?

Marsden: (laughing) I wasn’t ready for the sensation of what stubble felt like. I don’t know. To me, it was one of the funniest moments in the script when I read it the first time: how far this guy would go to win someone’s affections. If you kind of have that in mind, then, like, okay, do we have the audience at this point? Are they in? What’s their response going to be? Are they just going to be like, “Oh my God, this is awful,” or “This is hilarious”? We had no idea. But Jack and I were on board from the beginning. This isn’t something you can half ***. You’ve kind of just got to go for it. It’s funnier because of that.

Q: I thought it played out naturally, the after-effects of it.

Marsden: You can say it, romantically. It was really romantic. It was believable.

Q: Your character, Oliver, says, “It’s no strings,” but there are always strings.

Marsden: Right. I just like what it does to the character. It rocks his world, sends him on a spiral. It’s just so interesting to watch that unravel. He still kind of wants to win (Dan’s) affections and his attention. It’s just a great character.

Q: Keeping on the chemistry note, you guys co-starred on an episode of “Touched By An Angel” 20 years ago, right?

Marsden: That’s where the chemistry began. We had to be reminded of the fact that we worked together on that show years ago. It was 1994. And it wasn’t like we were just two guest stars in two different storylines. We were playing drug dealers. We were partners-in-crime in the episode.

Q: What was your own big break? What was that first thing that gave you that first taste of success as an actor?

Marsden: I did an episode of “Blossom.” I date-raped Blossom.

Q: Wow, you played some bad guys early on.

Marsden: Yeah, see? It’s tough being the good-looking guy. (He laughs.) When I started out, I had two lines on the pilot of “The Nanny.” I did an episode of “Saved By the Bell.” I just did anything that came my way.

Q: Did you get a lot of attention from your friends after you guest-starred on that show?

Marsden: No, no. I didn’t really get a lot of attention for that. All my high school buddies would call and say, “I see you’re going to be on ‘Party of Five.’ That’s cool.” Any job as an actor was great when you’re young.

Q: You have a fun scene where you approach Dermot Mulroney, playing himself, and you pretend you know him. That’s got to have happened with you, where people come up to you and you don’t quite know where they’re coming from or what exactly they’re after.

Marsden: Are you asking if they’ve come up to me or I’ve gone up to them? I’ve been on both sides of that. (He laughs.) I still get star-struck and see people and feel awkward and don’t really know how to talk to them. I got that way when I saw Jack again after 20 years. But you mean when people come up to me?

Marsden: After it happens a few times, you know the strange behavioral paths that people take to try to get into your world. As an actor, you take note of that and then insert it into the movie, but I can’t think of anything specific. The best is when they think you’re someone else.

Q: Who do you get mistaken for?