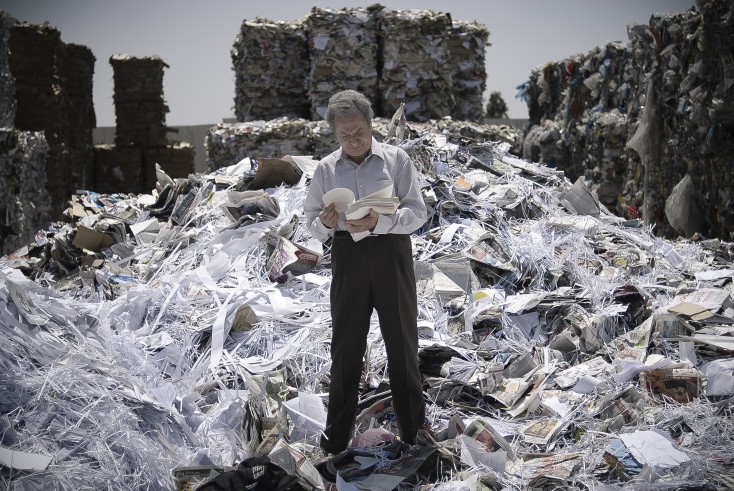 HOLLYWOOD—Fathers and sons have been at odds with each other since the beginning of time. (Adam and Cain, anyone?)

“Footnote,” which was this year’s Israeli entry in the Academy Awards’ foreign language category—it’s released here in Hebrew with English subtitles— and one of only five nominees, explores the great rivalry between father and son historians, who have both dedicated their lives to studying the Talmud (the writings of Jewish law, ethics and philosophy). Each has different approaches to his work.

The father, Eliezer (Schlomo Bar Aba), believes only in the written word. He also is a stubborn purist who fears the establishment and has never been recognized for his work. His son, Uriel (Lior Ashkenazi), is concerned with the overall meaning of the Talmud and is more interested in how it is interpreted. His progressive views have made him an up-and coming star in the field. He appears to feed on accolades and recognition, much to his father’s quiet consternation.

Their relationship is tested when Eliezer learns he is to be awarded the Israel Prize, his country’s highest honor for scholarship, and his vanity and need for validation are suddenly exposed. Uriel, meantime, discovers that the announcement is erroneous—that he is actually the intended recipient—and he is at a loss over what do to correct the problem without embarrassing his father.

Writer-director Joseph Cedar, who won the Best Screenplay award at last year’s Cannes Film Festival for “Footnote,” recently sat down to talk about the lighthearted comedy and its universally recognizable themes involving parent-child relationships, and the importance of dealing with the minutiae.

Front Row Features: These men are caught up in their academic study, which threatens their personal relationship. Are you saying they may be devoting his life to something that is ultimately irrelevant?

Joseph Cedar: No. I’m saying the opposite. I completely identify with (both the characters). There’s nothing more that matters than the tiniest nuance of language, or it matters as much as anything grand. I can understand that something esoteric and tiny can have a personal magnitude that is equal to the most largest scale conflict in the world.

Front Row Features: Is it worth devoting your entire life to it?

Cedar: It’s not only worth it, but also satisfying. It’s easier to devote your life to something controllable and focused, rather than devoting your life to something you know you’ll never really capture or obtain. The father character is really threatened by the big picture. The tiny fragments that he is able to separate from the larger picture gives him a sense that he has some control over the world he lives in.

Front Row Features: Are you focused on details like that character?

Cedar: Many filmmakers will identify with the sensibility of the father character. The details, whether they matter or not, are what we do. Constructing a film is putting together details. The larger picture somehow exists later on in the editing, but every filmmaker finds himself devoting most of his energy to tiny details that in daily life you don’t pay attention to. You have to pay attention to details when you’re constructing something from scratch. Films that I appreciate are able to find little points of accuracy that give them their uniqueness, and give the characters and actors a sense that what they’re doing is grounded in some psychological truth.

Front Row Features: Your ending is purposely ambiguous. Is the prize tainted no matter who ends up with it?

Cedar: I can’t wrap my head around the complexity of the final scene. I don’t know how I would react in that situation. There are many conflicting things as to how I would understand the characters’ situation.

Front Row Features: Why was it difficult?

Cedar: The big dramatic questions are those I don’t know how to answer or I have to answer it in a way to give it judgmental value. I don’t know what the right thing to do is from any of these characters’ point of view. That’s why it ends in a way that allows the audience to take that decision.

Front Row Features: What do you think happens?

Cedar: I try not to interfere with that discussion. For me, there is a clear closure in the film, but I’d rather not offer that to the audience.

Front Row Features: Does this film reflect the current culture in Israel?

Cedar: I think so but I can’t really answer the question objectively. I didn’t set out to do anything but tell the story I wanted to tell. If it ends up being more than that, it’s not really my doing.

Front Row Features: You won the screenplay award at Cannes but it’s also not a lot of dialogue. Did you write what was happening onscreen in detail in the script or did that happen while you were making the film?

Cedar: It was part of the screenplay. The cinematographer added more meaning to what’s in the screenplay. There was a concerted effort to be subjective and give every scene a certain point of view that has dramatic tension regardless of the plot.

Front Row Features: There’s a scene where he walks past a memorial on his way to work. Was that in the script or was that something you discovered when you shot on location?

Cedar: It was in the script. The memorial on the route from his house to the library was for a historian I knew, who used to walk that same route every day. He was stabbed to death. It’s a little footnote in the film for someone who influenced this character in many ways.

Front Row Features: Is this script based on personal experience? Your father has won the Israel prize for biology. Are you speaking through the characters on experiences you’ve had or would like to resolve?

Cedar: Of course. There’s no question I’m trying to resolve something. The fact if other people are interested in it is just a bonus. I like to view what I do as a profession. It is an industry. It has its rules and standards, but one of the advantages of working in a small industry like the Israeli film industry, is that all you have to do to do your job well is to be honest. If it ends up meeting all the requirements of the industry that’s great but it’s not what really motivates most of us.

Front Row Features: What did you take away from making this?

Cedar: There’s a line in the film where the father says. “In reality, nothing is nice.” From his point of view, things are either correct or incorrect, right or wrong, but nice or not nice is a scale he doesn’t know how to deal with. So one of the things I took away from this film is that I disagree with that sentiment. There are things that are nice and somewhere in-between correct and incorrect.

Front Row Features: How are your two main characters different from each other?

Cedar: One of the things that separate the father from the son is also the difference related to the written word and the oral word. The Talmud was delivered from generation to generation orally for a long time, and at a certain point was written down. To me, the written word is the end of its development. It loses its flexibility and relevance because it stops and seals itself. The oral deliverance is dynamic. It takes into consideration what people need at a certain time. The father has a finite depth into his investigation because he’s dealing with the written word. The son is interested in interpreting something that’s much more liquid, and endless in its interpretations because every generation gives it another layer of relevance.

Front Row Features: Are the Oscars relevant to you?

Cedar: The Oscars have content and there is substance to a lot of the discussion. It’s really a worthy event and it’s more than just the glamour.  It depends on the year, though. Some years, Oscars create an excellent discussion of the state of things in our world. Other years, the films aren’t as poignantly relevant to what’s going on. It depends.

Cedar: In the foreign language category, it was an excellent year.