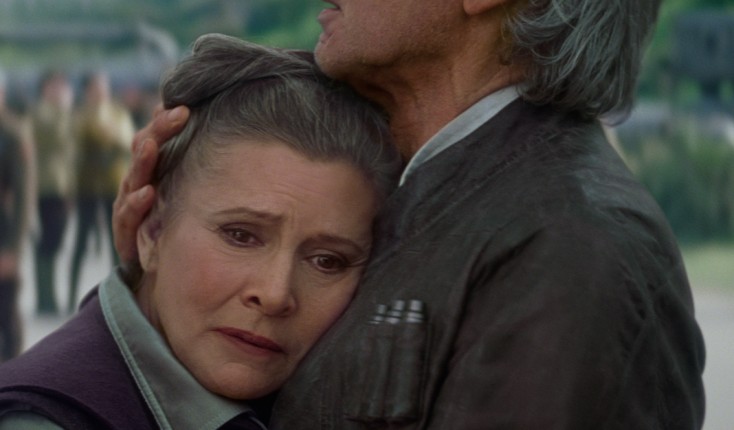 HOLLYWOOD—Thirty-two years after their last outing as Han Solo and Princess Leia, Harrison Ford and Carrie Fisher reprise their iconic roles in the long-anticipated sequel “Star Wars: The Force Awakens.”

The duo’s onscreen courtship captured the hearts of fans in the original trilogy. In “The Force Awakens,” their lives have taken new directions. Han Solo is a smuggler while the princess has become a general for the resistance. Though somewhat estranged, they remain cordial and share an important bond. “Star Trek” and “Lost” creator J.J. Abrams co-wrote the screenplay with Lawrence Kasdan and Michael Arndt, and directs the film. Abrams wrote 1991’s “Regarding Henry,” starring Ford.

Ford and Fisher spoke about their return to the franchise that made them international celebrities four decades ago, working with the new cast and the enduring legacy of “Star Wars.”

Q: Harrison, after all these years, why did you want to come back to this franchise?

Ford: It seemed easy to come back to the character. As they say, the clothes make the man. (He chuckles.) I had walked more than a mile in those boots. I was interested in the described path of the character. I thought there was an interesting bit of business for the character to do, and I had a real good time with J.J. Abrams, talking about it, and getting ready for the adventure of filming. So, it was easy.

Fisher: She would have to, wearing those hairpieces. I did have a baboon *** hairstyle—and I mean that with love. You need a sense of humor for that sort of thing. It keeps it lively and fun when you’re getting shot at and everything. It’s the hair that really makes you funny.

Q: Harrison, could you talk about what it means to you to be one of the bridges between the original series and this new generation?

Ford: It’s gratifying to be asked to be part of this. There was an interesting story to tell through the character. It’s always nice to anticipate working in something that you know people will have an appetite for. This is not a crapshoot; this is the big casino. It’s fun to play with these toys again. It’s been a great experience.

Q: Carrie, can you talk a little bit about bringing out the girl power in the original trilogy and now in “The Force Awakens?”

Fisher: I am the beginning of girl power. I got to be the only girl on the all-boy set, which was really fun—to put things in their drinks, and stuff like that. We drank through the whole trilogy in the beginning. This was a sober set. So that’s what J.J. (Abrams, the director) brought to this was sobriety. (Princess Leia) is more powerful in the girl. She takes on the physical power and then I scream at them until they pass out. Not scream; I make fun of them. That was what was really fun about doing anything that girl power-esque is bossing men around. I know a lot of women out there haven’t done that yet, and I encourage them to do so.

Q: Harrison, what are the biggest differences between this “Star Wars” and the first one? How did it feel being back on the set as Han Solo?

Ford: It’s hard to say what the difference is. I can tell you how it feels; it feels familiar, it feels good. “It’s good to be home,” as Hans says in the trailer. I’m aware of the value that’s placed on these films by the audience, and I’m gratified that the first three have been passed on generationally through family, and that there’s still an audience for those of us that were in the original film. There’s still some value to them in interpreting life somehow. It’s also a bit of a mystery, but it’s very gratifying to be part of that.

Q: Carrie, what was the scariest moment on your very first day of production?

Fisher: (Having a) bad memory; not remembering my lines. That was scary. I’m the custodian of Princess Leia, so I never got out of character, and I wondered if that would be noticed. (She laughs.) No, but I was very nervous. It’s been a long time. And I don’t like looking at myself at this age in a large way, so that was scary, and it remains so.

Q: Fans of the original series are eager to share the experience of “The Force Awakens” with their children. What do you think about this film being a family bonding experience?

Fisher: I’ve had people over the years come up to me and say “I’m showing this to my child. I didn’t want to wait till they were 6, so I went with 5.” And you watch your children watch the movie and you learn something about your children, and will we like the same characters and Halloween becomes kind of more of a Thanksgiving experience, without the turkey. But you see all these pictures of entire families dressed as the characters and I find that so moving. Sorry, but I do. It’s just an amazingly emotional movie.

Q: Harrison, as a parent, what’s it like telling your kids you’re coming back to this franchise? Did that up your cool factor with them?

Ford: My kids do not think I am cool at all, and being in this movie is not going to convince them otherwise. They’re just glad to see that dad is still working. (He smiles.)

Q: Do you have you any advice for the new stars of this franchise like John Boyega, Daisy Ridley and Lupita Nyong’o? Is there any hope that you could even tell them anything that would help them deal with that?

Ford: My advice is pretty much limited to look both ways before you cross the street, stuff like that. But I’m not going to tell them how to navigate this very personal space of trying to figure out the careers that they’ve chosen for themselves. It’s bizarrely individual how you navigate the space between where they’re at now, and the rest of your useful professional life, but they’re in for a big ride, and they know it, or I think they know it.

Q: J.J. Abrams said that there are definitely no Ewoks in the film.

Ford: That was in my contract. (He smiles.)