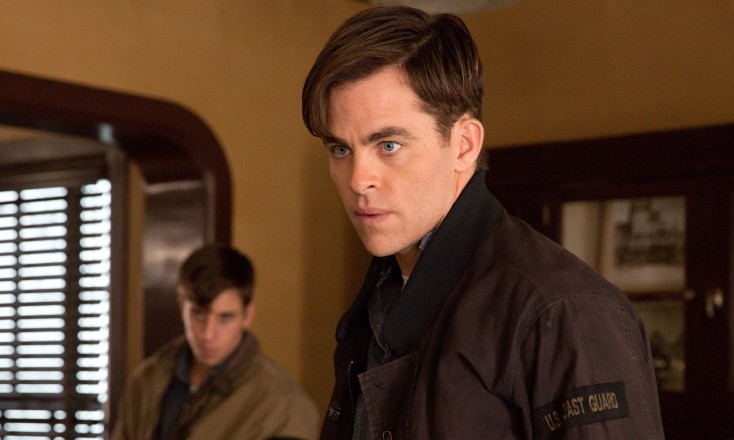 HOLLYWOOD— Chris Pine rocketed to stardom in 2009 when he took over the iconic role of Captain James T. Kirk in J.J. Abrams’ reboot of the sci-fi classic “Star Trek” franchise.

He now takes on another heroic character in the earthbound adventure, “The Finest Hours.” Pine plays real-life hero Bernie Webber, a Coast Guard coxswain, who bravely led a small crew into a New England storm in hopes of rescuing the survivors of a wrecked oil tanker off the coast of Chatham, Mass., in February 1952.

The 35-year-old Los Angeles native, dressed casually in a black pullover sweater and jeans for an interview, spoke about playing Bernie, the real-life hero, shooting at some of the actual locations and playing another heroic role in the upcoming “Wonder Woman” movie.

Q: What made you jump onto this project, even before a director was attached to it?

Pine: It reminded me a lot of a film I did called “Unstoppable” in that it’s a driving thriller aspect of the film and it’s not all that complicated of a film or a story and there’s a simple elegance to it. I just liked the bow tie of that—that it’s driven by a really strong romance and ordinary men doing extraordinary things. I love that.

Q: Your depiction of the unassuming and somewhat shy Bernie is reminiscent of legendary Hollywood actor Gary Cooper?

Pine: I felt like Burt Lancaster and Jimmy Stewart. I didn’t think about Gary Cooper, but yeah, sure.

Q: He’s sort of tongue-tied and doesn’t really know how to express himself.

Pine: It’s a (Disney) studio picture and that was kind of was one thing that I held on to. My other touchstone was just fear and anxiety and I know a lot about those two awful emotions. This poor little Bernie was just wide-eyed and obviously really hurt somewhere along the way and insecure and I know all of those feelings so I just turned up the volume on those.

Q: Is that why he’s so reluctant to marry his girlfriend Miriam (played by Holliday Grainger)? Do you think he fears he may die so he wants to spare breaking her heart?

Pine: Bernie, at least on the page, was a man that grew up in a family with a very strong father, with brothers that served in the war well, were honored for it, were on the beaches of Normandy (during World War II), and Bernie wasn’t. So he probably felt that lack of ray of sunshine from his dad because of that and so always felt in the shade and was kind of the black sheep. He was just the little puppy that never got the love. That’s my Freudian analysis of Bernie. (He chuckles.)

Q: Why didn’t you demand it?

Pine: It strangely never occurred to me. I don’t know why.

Q: You shot at some of these actual Chatham locations where these events took place more than 60 years ago. I can’t imagine that wouldn’t affect your performance. Was that something that kind of crossed your mind when you were filming?

Pine: My duty is to the script and the story and the version of Bernie that I read on the page. Otherwise, it would just be incongruous and wouldn’t work. To that end, my most immediate relationship to Bernie was less about the locations and more about this audio recording I had of him. That’s where I felt kind of closest to who the man may have been.

We did get a chance to visit Chatham and go to the Coast Guard station there. In the cafeteria there is the same bench where the boys went and shared a coffee after their night and seemed to be laughing and joking around. It’s kind of stunning.

Q: You and Ben Foster’s character, Richard Livesey, who plays one of your crewmen, have an antagonistic relationship on screen. Did you rehearse that between takes or off screen, if did you sort of develop that?

Pine: I love Ben too much. It’s hard to be antagonistic toward him. That’s not my deal as an actor. I have a very hard time keeping that up when we weren’t filming. It’s “action,” and “cut,” and then it’s about, “Let’s talk about Waylon Jennings…” or whoever we’re playing on the boom box that day. No, I just like him too much.

Q: When you do movies that are based on true events, does it matter to you how true the film version is to be to those events? Do you investigate and say, “This is authentic” or “This is a movie?”

Pine: Yeah. For me, it was the audiotape and some pictures of Bernie. Bernie also wrote a firsthand account of (the SS Pendleton rescue) and then the book that the film was based on, and that to me, along with themes that my director wanted to portray in the film that were brought out by the screenwriter, I mean that was my job and then we kind of pastiched something together.

Q: What was on that audiotape?

Q: About this event?

Pine: Yeah. It was like 15 some-odd years later and he just sounds so bored. The man is just so bored talking about it. He’s got this wonderful New England lilt and then this happened and then that happened. He’s just a by the book, regular Joe. It was very illuminating for me, and so I just kind of drew whatever I could out of that. He just seemed like a man who didn’t want to talk about it anymore. He wanted to get on with his life. He was bored talking about it. He had a family. He believed in God. He loved the ocean. There you go.

Q: Is it more fun to go as an actor into the sort of fantasy world of something like “Star Trek” or “Wonder Woman?”

Q: This film is one of those rare big-budget Hollywood movies that likely won’t have a sequel. You told a story and you’re done with it, which I guess is most actors’ experiences, unless you’re involved in franchises as you are. Is that something you like at this point?

Pine: I like to have a job. I am in the .0001 percentile of actors that work steadily, thank God, and it is not false humility. I’m really happy to work. I get great gigs. I meet awesome people. I get paid well. I have a fantastic life and I get to learn about a bunch of different things. It’s just incredibly, honestly, the rarity of a big studio making a film like “The Finest Hours.” Spending $80 million on a film right now on a one-off period motion picture is crazy.

Q: Have you seen the final cut yet?

Q: Do you have any fear of the sea?

Q: Did the writers add that line about your character being handsome at the beginning?

Pine: (laughing) No, but they have great taste, I guess.

Q: You also play a military officer in a period-set in project, “Wonder Woman.” What’s your take on Steve Trevor? Is he anything like Bernie Webber?

Pine: Oh, Steve Trevor is not Bernie. Steve Trevor is roguish. He’s a cynical realist who’s seen the awful, brutish nature of modern civilization and he is a worldly guy. He’s a charming guy too. It’s going to be a great, fun film with some incredibly deep, interesting and morally relevant themes. Patty (Jenkins) is just directing the daylights out of it. It’s shot beautifully. It feels so wonderfully period but also with this wonderful pop sensibility.

Q: Has it been fun to explore World War I?

Pine: Yeah. It’s a period we don’t really see often (on film)—that time period. It’s usually World War II. That’s another time I love too. The costume design is incredible. I mean Lindy (Hemming, the costume designer) is incredible. We have scenes with 500 extras all in period dress. I’ve never actually been on a film with extras casting as beautifully done as it is on this film. It highlights a really important point. When background casting is done well it can make or break a scene, just the vibe of it. I’ve working in scenes with people in deep background that have entire lives going on. It’s awesome. It’s actual make-believe land. It’s fascinating.

Q: Can you reveal if Wonder Woman saves Steve Trevor?