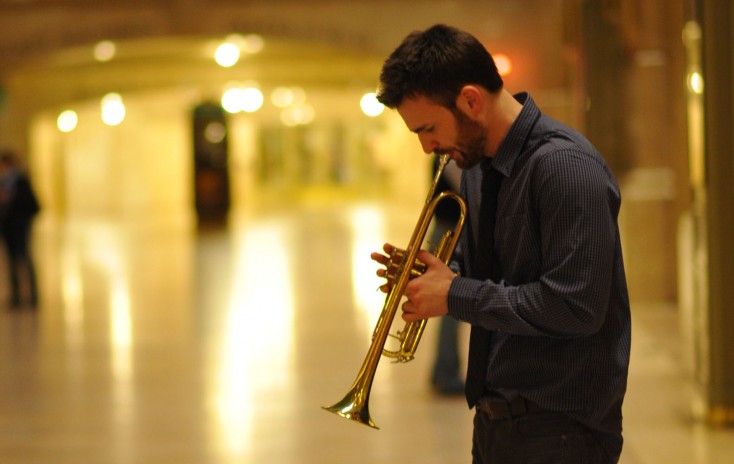 (l-r) Chris Evans and Alice Eve star in BEFORE WE GO. ©Radius

HOLLYWOOD—Wholesome, all-American looking Chris Evans has captured the hearts of superhero enthusiasts with his depiction of Marvel’s all-American soldier Steve Rogers a.k.a. Captain America in the “Avengers” and solo “Captain America” movies. He previously played Marvel’s Johnny Storm a.k.a. Human Torch in 2007’s “Fantastic Four.” The film is available On Demand and hits theaters Friday.

The 34-year-old Boston native plays a character decidedly more earthly—although still sort of heroic in the romantic dramedy “Before We Go.” The blond, blue-eyed Evans not only appears in the film opposite British beauty Alice Eve (“Star Trek Into Darkness”), he also makes his directorial debut.

Evans plays a busker in New York’s Grand Central Station who helps out a young traveler who has lost her purse. Over the course of one night, the strangers become friends and embark on a series of low-key adventures around the Big Apple while getting to know each another. The “romance” between Nick (Evans) and Brooke (Eve) doesn’t go in the typical direction of most meet-cute dramedies, though, which is partly what attracted the actor to the project.

Dressed casually in black jeans and a wine-color v-neck sweater that accentuates his still Captain America-ready bod, Evans spoke about why he wanted to don the director’s hat, learning to play the trumpet, working alongside Eve and taking advantage of the breaks that playing a superhero can create.

Evans: Chris Evans is a pain in the ***. He’s a **** but I made it work. (He laughs.) No, actually, it was great. I liked wearing both hats. I’m a bit of a control freak so I enjoyed the responsibility.

Q: Making the Marvel movies and playing Captain America, do you feel that has made you a stronger actor and filmmaker? Would you have been able to take on directing and acting in this movie without everything you learned in the last few years?

Evans: On a technical front, without the Marvel films I would never have had this opportunity. The notoriety that Marvel provides is what allows me able to put myself in a movie and get it on its feet. That’s the nature of the business. But, just as an actor, the nature of life experience, what Marvel brings in terms of making a movie of that magnitude and the ripple effect it has on you personally, emotionally, mentally, that can only age you in any creative endeavor whether you are a director, actor, musician, anything so it’s certainly coloring my experience.

Q: Was it a little tricky because you are in every scene and there’s a lot of dialogue? You’re not doing special effects and things like that.

Evans: The reason I liked the script was that some scenes are five, six, seven pages long so if you’re doing one full take or you’re covering all this dialogue, it’s not necessarily easy to run back and watch the scene on the monitor. You’ve doubled your workload. So, you kind of go on a gut (feeling) or trust your producer and say, “Do we have that?” It’s nice to have a flow going as an actor but, as a director in the editing room you kind of wish you had spent more time in the director’s chair to be able to watch the scene manufactured.

Q: This is the kind of movie you don’t see a lot any more—just two people on the streets of New York getting to know each other. What, about the story spoke to you and made you want to make it your directorial debut?

Evans: Honesty, it a matter of trying to find something that you are passionate about and connect to but also it’s something that the producers are willing to let you direct. It’s not like being a first-time director they’re throwing Aaron Sorkin scripts at you. I can’t tell you how many scripts I read that were shit. You realize they’re shit because no one is touching them. That’s why they’re coming to me. So, it’s tough trying to find something that’s available, that they’re willing to let you direct that you still are connected to and passionate about. So, this script was the closest thing to that and it felt manageable. The script went through a lot of incarnations and was massaged quite a bit but it still felt like something that I enjoy. I like movies that take place in a finite amount of time with limited characters. I like things that read like theater.

Q: It seemed like New York was almost a character in itself so what was it like working there?

Evans: It certainly is a character and that’s one of the things we wanted to accomplish but December night shoots, it’s a challenge.

Q: Alice’s character Brooke is out there alone with Nick between 1 a.m. and 5 a.m. when few people are on the streets. She takes a chance. He might be an axe murderer!

Evans: (He laughs.) He’s the only one awake. (“An axe murderer?”) Oh Jesus! That was the inner dialogue. Glad that came across.

Q: What did you discover being the director and the lead actor on the same project? Did you learn something from the experience?

Evans: Sure. It is tough watching yourself in the editing room. You really learn all your little crutches and little tricks and moves and you realize that editors know where all the bodies are buried. I wanted to call every editor I’ve worked with. It’s like, “I’m so sorry. Don’t you tell anybody what I do.” It’s eye opening. It’s tough to articulate what you learn but you do learn the takes that you watch of yourself that you like versus the things that are unusable and you remember the process you were going through from take to take. It’s very educational, very eye opening.

Q: What was your relationship with your cinematographer on this film? Did you go location scouting, storyboarding and picking out lenses? How involved were you?

Evans: All of that stuff. Our DP John Guleserian, I just love him. “Like Crazy” is one of the movies that I use as a steady template that I enjoyed so we ended up getting the same DP He’s so fantastic. He was wonderful, him and Mark (Kassen, producer). Being a first-time (director), you don’t necessarily have the lingo to express the look you want. It’s like you know what flavor you want to taste, you just don’t know what ingredients go into it. The beautiful thing about movie making is that we all know cinema so you can reference other films so you can say, “How do you do that?” Luckily, I had a lot of people who were willing to be patient with me and walk me through, but he was there every step of the way through storyboards and scouting and all.

Q: Your character Nick is a trumpet player, who has an audition for a jazz band the next day. Do you have any worst audition experiences you could share?

Evans: Trust me, bad auditions are not hard to come by. Finding a good audition is the real diamond in the rough. That’s kind of the nature of acting. They’re all bad auditions. It’s a hard business. You have to be like a sadist.

Q: How do you overcome that?

Evans: I don’t know that I have. I’m under a crushing wave of insecurity right now.

Q: Do you play the trumpet?

Q: You’ve worked with some great directors. Did you seek out any advice from them?

Evans: I did talk to some guys who knew I was doing it. The Russos, Edgar Wright even Mark (Kassen, the producer on “Before We Go”) directed “Puncture.” The general consensus, given the fact that they knew I was new at it was, “Don’t be afraid to lean on people. You are surrounded by very talented people in their respective professions. Don’t pretend to know what you don’t. Ask for help if you need it and trust the talent of the different departments.” You’ve got to check your ego at the door and be willing to look foolish.

Q: Down the road, do you ever see yourself being solely a director?

Evans: Listen, I love acting. I’ll always love acting. I think most creative people are relatively fickle. I think the search for an outlet evolves and that’s the beauty of being creative. It changes from day to day. I always will love acting but acting comes with a lot of strings attached to it. It’s not like you can just sit in your room and act. You’re not a painter or writer so there’s a much broader dance you have to subscribe to. But given this experience as a director I’m absolutely in love with it and the lessons I’ve learned and the tools I’ve adopted from this one, I’m very eager to tackle the next one. Who knows how that will evolve and change? I couldn’t say it will only be this or that but I certainly have the bug.

Q: At one point Nick and Brooke pretend a public phone is a time machine and make some revelations about themselves to each other in the process. If you could go back to any time in your life, what would it be?

Evans: 2004 was a good year. I’d make a bad year worse if I went back to it. I’m just going to sit back during a good one and soak it in.