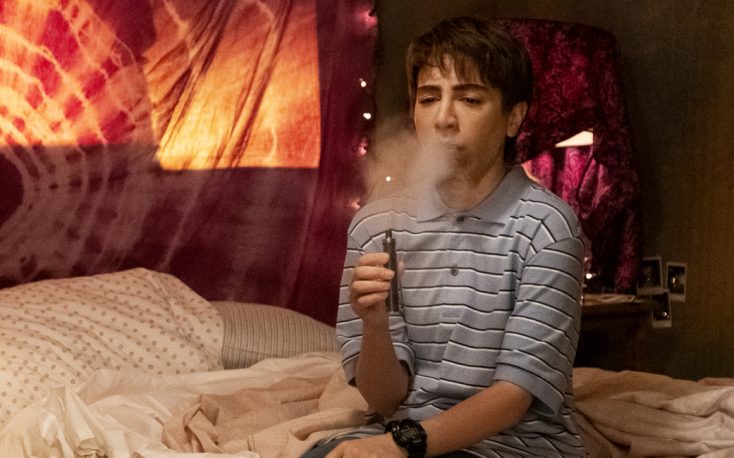 HOLLYWOOD—Former “Saturday Night Live” cast member Nasim Pedrad returns to TV in the new comedy series “Chad,” in which she plays a 14-year-old Persian-American boy. You read that right: the thirtysomething actress stars as an incoming high school freshman who is determined to be popular, or at least fit in and make friends with the cool kids, often with humorous results.

With mop-top hair and oversized clothes, Pedrad disappears (sort of) into the awkward adolescent character whose misadventures and insecurities are loosely based on her own memories as an awkward immigrant adolescent herself. The comedic actress was born in Iran and emigrated to the U.S. with her family when she was three.

“Chad” is an adult’s take on what it’s like to be 14 years old, but instead of taking a nostalgic trip through her own childhood, Pedrad (who is the show’s star, creator, writer, executive producer and showrunner) has set the series in today’s Internet age and the era of social media. The eight-episode single-camera comedy series premieres on TBS Tuesday April 6, at 10:30 p.m.

It’s been a long haul for Pedrad to bring the series to fruition—five years—but days before the premiere she is gleeful at the prospect that her pet project is finally going to debut.

Pedrad was a cast member on “SNL” between 2009 and 2014, and has since starred on other TV shows including “Mulaney,” “New Girl” and “Scream Queens.” On the big screen, she appeared in Disney’s live-action “Aladdin,” the comedy horror “Corporate Animals” and 2020’s female-driven “Desperados.”

In “Chad,” Pedrad plays the title character who has to navigate the social pecking order of his Pacific Northwest high school and cope with familial and cultural complications of being part of a Persian-American family. He lives with his mother, who is just getting back into the dating world after splitting with Chad’s dad; a distant relative Hamid (Paul Chahidi) sometimes referred to as an uncle and a wise, sassy younger sister, Niki (Ella Mika).

Chad’s best friend is Peter (Jake Ryan), a sweet nerdy kid who has nothing to prove. He’s content not being popular and is ready to have a good time, unlike Chad. His other friend (more like a frenemy) is Denise (Alexa Loo), who rides a motorized scooter and suffers from chronic fatigue syndrome.

Naz (Saba Homayoon), is Chad’s mom who begins dating Ikrimah (Phillip Mullings Jr.), which infuriates Chad until the boy discovers that his mom’s new suitor is a cool Black dude, and could raise his own “cool” quotient at school. Unfortunately, Chad becomes a little too cloying towards his new father-figure well before it’s appropriate and there is a hilarious episode where Chad and Peter show up Irkrimah’s house and awkward, embarrassing conversations ensue with the man and friends. In another episode, Chad hopes to score a pair of coveted LeBron sneakers, and Hamid’s efforts to help Chad get them backfire.

Oly Obst of 3 Arts, Robert Padnick, Rob Rosell and Rhys Thomas serve alongside Pedrad as “Chad’s” executive producers. Hayes Davenport executive produced the pilot and is a consulting producer on the series.

Front Row Features: Tell me about the origin of “Chad.”

Nasim Pedrad: I knew I wanted to write something I felt authentic to my own journey as an immigrant kid trying to fit in in America. I love writing about adolescence. Mine happened to be extremely awkward so I tend to write about awkward adolescence. The true inception of this is that I’d never seen a coming-of-age story or a teen show that wasn’t inherently limited by teen acting. What I mean is teenagers don’t know what’s so funny about being a teenager. They’re just sort-of living it. It’s adults that can reflect on that time and share this inside joke of what is so ridiculous about adolescence and surviving adolescence.

My idea, which started five years ago, was to do a coming-of-age show where the teenager at the center of it was played by an adult who’s in on the joke and can bring that nuance and perspective and specificity to the performance, you could get away with so much more. I really wanted to write a true comedy and I felt like this would be a fun experiment where Chad was played by an adult who’s in on the joke. I thought you could push the comedy so much further if you had an adult playing Chad because funny moments can be funnier and less sad because you’re not laughing at an actual Iranian child who doesn’t know what they’re in. You’re laughing at an adult who has some distance from that time in our lives. So, the experience of taking in a coming-of-age story where you know the teenager is played by an adult is very different from watching a coming-of-age story where there’s an actual teenager who happens to be in the middle of that period portraying the character.

FRF: Is Chad a throwback to your own experiences or is he supposed to be completely contemporary?

Pedrad: Chad is entirely based on me. Obviously, I wasn’t a 14-year-old boy but I was the very awkward tomboy growing up. I was a late bloomer. I was a kid caught between childhood and adolescence at a time when all of my peers felt way more advanced than me. So, the DNA of the character is based on my own adolescence, but then I made the creative decision to set the show in modern day. So, it’s everything I had to deal with as a teenager and then some.

It was important to get it right if we were going to set it in present day. The show explores everything from masculinity to sexuality and racism as it pertains to today’s generation of kids. I felt that “Chad” would be a natural vehicle to explore those themes because he’s also an outsider trying to figure out what it means to be an American boy today.

There are other things the show touches on that are relevant only to today’s generation that, luckily, I didn’t even have to deal with including just what it means to grow up in the age of the internet where you’re under this microscope with everything being recorded all the time. That, as well the never-ending exposure with the internet—being under this constant stream of information at an age where you’re not even able to process a lot of times what you’re seeing. Then, of course, one of the most obvious things, which is social media, and to think of the role social media plays in that equation for kids today. They’re inundated and curated with these oftentimes misleading images of what the lives of their peers are. All of that seems like its own unique hell that I didn’t specifically have to deal with when I was growing up but felt it was important to touch on in the show after the decision was made to set it present day.

FRF: How old were you when you came to the U.S.?

Pedrad: I was around 3. I was born in Iran. My parents were actually in America. My dad was at UC Berkeley. They met (in the U.S.) and then after the (Iranian) revolution in 1979, they went back to wrap up their lives there. They sold their house and returned here with very little. My dad was there the day I was born then he left the country soon after. My mom and I went to Germany for a few months and then I met my dad at the airport in Los Angeles when I was 3 years old.

FRF: Chad and his sister, Niki, are being raised by their mom alone in the U.S. and their father is in Iran. They have a distant relative named, an older gentleman named Hamid living with them. Was there a Hamid in your life?

Pedrad: Hamid is very much based on my own father who is just the sweetest human being on the planet. A lot of his manners and idiosyncrasies are based on my own dad. Obviously, I took creative liberties while flushing out that character. I’m not saying he’s a carbon copy, by any means, but the heart and soul of that character is based on my father.

I also thought it would be interest while Chad is lacking this viable male role model in the way that he feels he needs one, the man in his life is this sweet, loving immigrant who because he is the most “foreign” character in Chad’s life. He has an accent and he emigrated to (the U.S.) much later than everyone else. Chad loves him but he also finds him to be a bit of a liability in his quest to become popular and be accepted by his peers and come off as this all-American boy. So, there’s a little bit of a conflict there where Chad loves his uncle but he’s also trying to distance himself with the “otherness” that comes with feeling foreign. It was absolutely a fear I had growing up.

Teenagers are already struggling with their identity and trying to feel accepted by their peers but when you’re part of this other culture or when you’re an immigrant kid, it’s like one extra obstacle to get through in your effort to fit in. That presents a lot of interesting inner conflict. You love your family. You love your heritage. You love your parents but you’re also terrified by feeling different, and terrified by seeming un-American. You don’t want to be that interesting or stand out; you just want to fit in. Certainly, that was the experience I had. For me, having this weird name that nobody could pronounce was so anxiety-inducing.

Something as simple as going to an amusement park souvenir shop and not being able to find the name “Nasim” on a bicycle license plate made me feel so left out. At times, it was horrifying which now I’m able to reflect on from a comedic perspective because I survived it. But at the time it didn’t feel funny. It’s just scary. That was something specifically we explored on the show.

FRF: Will there be a season two of “Chad?”

Pedrad: We’re basically getting back into to the writers’ room in a couple of weeks, although we don’t have official confirmation that they picked up season two but they’ve committed to starting the writers’ room, so hopefully we’ll know for sure in a month or two.