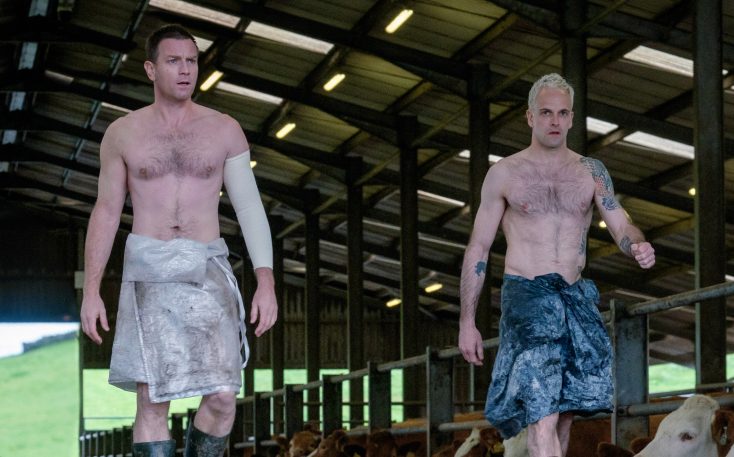 HOLLYWOOD—Renton, Spud, Sick Boy and Begbie are back. It’s been 20 years since “Trainspotting,” adapted from Irvine Welsh’s bestseller, arrived in theaters, introducing the world to these compulsive and impulsive young men from Edinburgh, Scotland. Though heroin junkies and petty criminals, they also proved to be surprisingly endearing because their actions and motives were depicted so realistically, thanks to the guiding hand of director Danny Boyle (“28 Days Later,” “Slumdog Millionaire”) and screenwriter John Hodge.

McGregor, 44, reprises his role as Mark Renton, whom audiences last saw fleeing a seedy hotel with the entire booty of cash (16,000 pounds, to be exact) from a drug deal that was supposed to be divvied up four ways. (Of course, Renton was thoughtful enough to give fellow junkie Spud (Bremner) his share, but left his other mates—Sick Boy (Miller) and the mercurial thug Begbie (Carlyle)—high and dry.

“T2” picks up with Renton returning to Edinburgh after a two-decade absence following his mother’s death and a brush with his own mortality while working out at a gym. There, he reconnects with Sick Boy, now going by his Christian name, Simon, and Spud, who is still battling addiction. Begbie, angry as ever, is locked up behind bars, but not for long. Soon, he too is back home, determined to exact revenge on double-crosser Renton. He’s also frustrated that his teenage son wants to go to college to learn about hotel administration instead of following in his old man’s criminal footsteps.

Simon too wants revenge but is willing to wait for the opportune time to strike. He lures Renton into a scheme to open a health spa/prostitution ring, funded through a sizable government-issued loan. Further attracting Renton to the deal is Simon’s beautiful Bulgarian girlfriend/business partner Veronika (Anjela Nedyalkova). Back for cameos are Kelly Macdonald, Renton’s former underage girlfriend who now is all grown up and practicing law as well as minor characters like Renton’s father and Welsh himself, reprising the role as hoodlum Mikey Forrester.

During a brief stopover in L.A., the genial Doyle spoke about returning to the madcap world of “Trainspotting,” and the possibility of revisiting yet another of his films that have developed a cult following.

Q: Watching the original “Trainspotting” again and then watching this sequel gives you a greater appreciation for both films. Have others told you that?

Boyle: I’ve been all around the world promoting it and, obviously, everyone you meet has got a story like you. They say, “Yeah, my brother showed it to me when I was 12.” Everybody’s got a personal relationship with it. But I can’t have any part of that because I just don’t know what it means to people. I knew that conversation would be there between the two films and the viewer because if you’re interested and you’ve seen the other movie, you’re going to have a complex relationship with it.

Q: I can’t think of another film where there’s been a 20-year gap between one and the other? The closest thing that comes to mind is Michael Apted’s “Up” series (documenting the lives of a group of British children from the time they were seven and revisited every seven years).

Boyle: That was one of the influences in the originating of it, but it’s very unusual to do that because normally you run out of time. The 20 years is just too long.

Q: It is, and what’s the likelihood that everyone would still around to return for “T2 Trainspotting?”

Boyle: Yeah, and we’re still talking to each other. But this is different. The fact that the film celebrates energy and youth and boyhood so much and it’s literally dripping off the screen in all of its kind of carelessness and damage and who cares about damage. It’s just full of it. To then say, we can make a film with those guys, because they’re all still around and they’re all stuck, still, but what they like? It’s a wonderful opportunity.

Q: In 2003, you were talking about doing a sequel and picking up the story of these guys nine years later.

But now, of course, it was different. They also wanted to matrix that in, their own experiences, the changes, what had happened to them, because they’re no longer the thrusting young things who are looking for the next role. They kind-of know the way everything’s worked. They’ve all had children since (“Trainspotting”). None of them had children when we made the first movie. They’re all fathers now. They all recognize the stuff in the film about fatherhood and how important fathers are, and how disappointing the fathers are in the film. Every father you meet is disappointed in their son or their son is disappointed in him.

Q: It was fun to see Bob’s (Carlyle) character Begbie, whose son is a disappointment because he is such a straight arrow and going to college. It’s like he wants to be the exact opposite of his criminal father.

Boyle: Well, (Gail played by Shirley Henderson) brought him up not to be like his father so, God bless him because who wants another Begbie running around? (He laughs.)

Q: Making this film must have been tricky for you, because you don’t want it to be like a complete nostalgic trip. You have to tell a new story. You have to satisfy the fans of the original and you also have to advance the story. They can’t score another kilo of heroin, for example. There has to be something else. So how did you and (screenwriter) John Hedge pull the rabbit out of the hat?

Boyle: It’s a balance. You’ve got to acknowledge that the other film exists and you’ve got to inherit from it. I think the trigger was Renton’s crisis, because it made it more acute, rather than him just deciding to come back. In the original “Porno” book, the reason he went back home was for his mother’s funeral. That just seemed like a typical trope for that kind of movie, so then we came up with this health crisis, which triggers his desire to go home. It’s must more generalized as a reason to go by because he didn’t go back for his mother’s funeral. His mother has died in the meantime and he never showed up, which gives you something much, much more acute to try to atone for. He says that he’s ended up choosing disappointment. He’s disappointed himself. He’s lost the ones he loves, and he’s not turned out to be the person he wanted to be, so you’ve got a brutal purpose for the film to live, to look at that character, and hopefully find that kind of richness in the other characters as well.

Q: There’s a beautiful shot in this film where Renton (Ewan McGregor’s character) is sitting at the kitchen table with his father. There’s a shadow on the wall that could be his mother’s shadow too. It was a nice touch.

Q: There’s also a lot of humor in the film as there was with the first. Whose idea was it to put in the duet, “1690,” with Renton and Simon (Jonny Lee Miller) singing in the bar?

Q: Ewan loves to sing. He’s one of the voice cast members in Disney’s “Beauty and the Beast.” He’s got range.

Boyle: He does. He’s a performer. He loves treading the boards. He’s got musicality. He’s got a perfect ear.  It was great for the character too because, once you’re middle-aged, you don’t mind getting up there and making a fool of yourself in front of a whole crowd of drunks.

Q: Heroin has been part of this story since the 1996 film. It was reflective of the times that were going on in Scotland. We’re in another heroin epidemic now, and it’s here in the U.S. too. Is that coincidental? Is it a cyclical thing?

Boyle: I don’t think it’s cyclical. I think heroin has always been with us. When I was doing the original, I had all the research, because we will all end up with morphine. It’s probably the most compatible drug there is. It’s the most perfect fit with the human body and it’s always been with us and, if you are unfortunate enough to be in a terrible accident and in terrible pain, it will be used. It’s powerful. Its connection is to take away, in medical terms, physical pain, and in street terms, emotional pain.

What you find out is that the reason people are using is not that they’re chasing a high, they’re actually eradicating an emotional pain or absence that they can’t cope with. That’s a human condition. It will always be with us because there will always be dealers who will perpetually exploit them.

In this film, they take (heroin) again, but only in a moment of acute emotional pain, when they’re confronted with the past and with their responsibility to the past. But it’s not a celebration. It’s an emptiness, really, because it’s what it gives you so you can just blank some stuff out.

Q: Scotland has treatment clinics and needle exchanges. They don’t have it on mass scale in the U.S., but there are some places, like Boston, that do it.

Boyle: It doesn’t matter what right wing politicians say; it’s just common sense. In (Welsh’s) first book (“Trainspotting”), he said there are people who can use it when they’re young and never touch it again in their whole life, but there are other people who, once they touch it, that’s it. It will always be with them. Even if they’re not on it, it will always be there for them and they will turn to it in crisis. It’s part of the human travail, really. It’s part of our journey—this relationship with this drug. You can also make the same case about cocaine, which also has an incredible history with us. You can’t just eradicate it by saying it’s a bad thing. It is there. Therefore, you should look after people who suffer from (abusing) it. They’re not people who are looking to exploit you; they’re in need. You’ve got to help them if you can.

Q: Before you go, can you tell me if there be a “28 Months Later?” Would you want to be involved with it?

Boyle: It’s an idea. I saw Alex (Garland, the screenwriter of “28 Days Later”) the other day, actually, and I saw his new film (“Annihilation”). It’s really good. We were talking about (the sequel), and there is an idea. Whether and when it will emerge, I don’t have a timetable, but the idea is there, so that’s the most important first stage. It will depend on how things fall out in the next year or so.  But, yes, I would be (involved). I had great fun on the first one and I regret I couldn’t direct the second one (“28 Weeks Later”), because I was doing “Sunshine” at the time. I have no problem (with returning to the franchise). Who doesn’t love a zombie apocalypse? The rest of the world has fallen in love with zombie apocalypses. We have them all the time, at the moment.