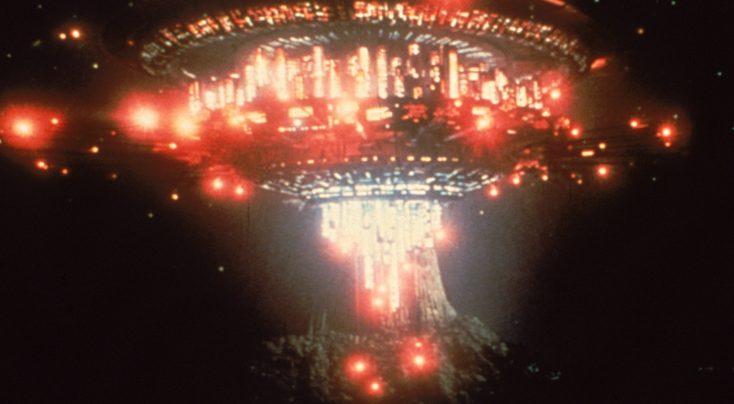 HOLLYWOOD—“Close Encounters of the Third Kind,” Steven Spielberg’s 1977 sci-fi adventure about alien-abduction and UFOs, returns to theaters for an exclusive one-week engagement beginning Friday, Sept. 1. As with most things Hollywood, the 40-year-old film has gotten a facelift. Moviegoers will be able to see the restored film in ultra-high definition 4K, which is supposed to give the picture a sharper, crisper quality.

The director’s cut of the digitally remastered “CEO3K” was shown in advance to the media and Hollywood industry guests at the historic Hollywood Cinerama Dome, where the Columbia Pictures film premiered in 1977. Although not noticeably different than what viewers have seen on home video over the past four decades, the spectacle of seeing the classic film on the big screen is likely to satisfy first-time viewers, as well as those who’ve only seen it on TV as well as those who recall seeing it at their local cinema during the Carter Administration.

In a brief pre-filmed introduction, Spielberg explains that the film’s “government conspiracy” overtone was rooted in the public’s mistrust of authority in the post-Watergate era, and that he didn’t consider it a “science-fiction movie” while he was making it. Humorously, he notes that despite his long association with the sci-fi genre, he has never had a close encounter himself in real life. The legendary Oscar-winning filmmaker also revealed that composer John Williams’ famous five-note tune so closely associated with the film reminded him of “Pinocchio’s” “When You Wish Upon a Star.” (At least two homages to that song play out in the movie, including a glimpse of a Pinocchio music box in one scene when an alien ship descends on a remote farmhouse.)

After an encounter with UFOs, an Indiana lineman (Richard Dreyfuss) feels undeniably drawn to an isolated area in the Wyoming wilderness where he senses something spectacular is about to happen, but not before turning his house upside down and infuriating his wife, who flees with their children. He, along with other ordinary people who have had similar UFO encounters make their way to Devil’s Tower, but planted TV news reports (“fake news”) warn citizens to stay away from the area due to a toxic gas spill. Undeterred, Roy (Dreyfuss) and a woman (Melinda Dillon) searching for her young son whom she believes has been abducted, forge ahead on their remarkable quest, culminating in an incredible and memorable visual feast. The sci-fi classic also stars Teri Garr as Roy’s frustrated wife Ronnie and filmmaker/actor Francois Truffaut as French scientist Lacombe, whose travels around the world researching reports of close encounters with alien life lead him to Devil’s Tower as well.

Special guests at the Cinerama Dome event included Michael Kahn, the film’s editor who earned an Oscar nomination for his groundbreaking work and Marvin Levy, the film’s original publicist, who, after the screening, reflected on the film that to this day reminds audiences that “we are not alone.”

Watch the trailer at:

Digitally remastered and restored “Close Encounters of the Third Kind” will be shown on 700 screens for a one-week exclusive engagement beginning Sept. 1.