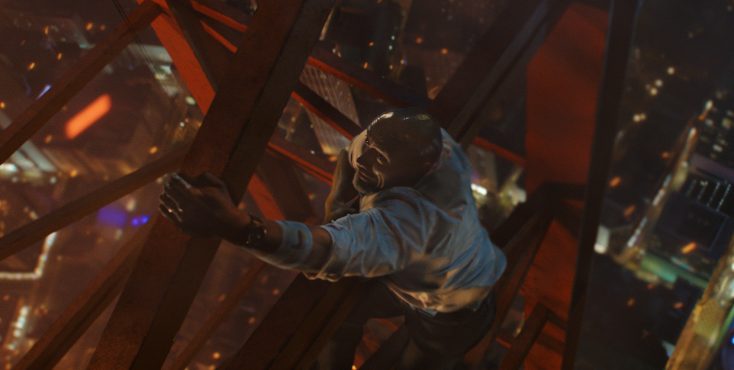 Johnson plays Will Sawyer, a former U.S. military veteran and retired FBI hostage team negotiator who finds himself working in the more lucrative and less harrowing private sector as a security assessor for a big multinational company. Though he lost part of his leg during a hostage rescue mission that went awry, he still manages to provide for his family and get around thanks to a prosthetic leg. In China for the grand opening of the world’s tallest building, which he has been tasked to secure, Sawyer suddenly finds himself a witness to a towering inferno, and he’s been set up by someone to take the rap for it. To make matters worse, his wife (played by “Scream’s” Neve Campbell) and kids are inside the building, several floors above the blaze, so it’s up to Sawyer to duck local law enforcement and find the bad guys who set him up but most importantly to rescue his family before they perish. Like “The Towering Inferno” and the “Die Hard” movies before it, with a sprinkle of “The Fugitive” mixed in, “Skyscraper” takes audiences on a roller coaster ride of intense action and thrills as Johnson dodges bullets, defies gravity and braves blazing heat. The film reunites the popular actor with Rawson Marshall Thurber, who previously directed him in the 2016 comedy “Central Intelligence.”  Chin Han, Noah Taylor, Pablo Schreiber and Hannah Quinlivan also star.

Johnson spoke about why he took the role and what he hopes audiences will take away from it.

Q: Why were you drawn to make this film?

Johnson: This film is easily the most physically demanding role I’ve ever played. The No. 1 anchor with audiences all around the world is the bond of family. Regardless of race or culture or class or religion, the ideology of family is one everyone relates to. There’s something very visceral about a family being torn apart, and the parents doing everything they can to protect their young. That’s always been a special anchor for us in “Skyscraper,” and for us to explore this on the canvas of film makes it so relevant to people.

Q: Can you talk about the relationship between your character Will and his wife Sarah, played by Neve Campbell?

Johnson: The bond that Will has with Sarah is a very strong bond. They were bonded by an extreme circumstance that takes place at the beginning of the movie. They’re married, have children and are very happy. Like a lot of marriages out there, it goes through its ups and downs but, at its core, is something very special. Also, at its core, each of them leans on the other. She’s an amazing wife Will is able to lean on.

Q: We haven’t seen Neve on the big screen in a while. Lately, she’s been doing television.

Johnson: I think Neve is perfect for this role. It’s an honor to have Neve back on the big screen and for “Skyscraper” to be her foray back into Hollywood.

Q: Was there anyone you consulted about being an amputee so that you would get the character just right?

Johnson: Yes. Paralympian Jeff Glasbrenner who lost his legs at 8-years-old. I had an opportunity to read Jeff’s book (“The Gift of a Day”) and study him. He was an incredible resource, and it was a proud, honored day for all of us to have Jeff on set for the very first time. I felt like we had an opportunity here to create a character that people around the world could relate to and could get behind.

Q: Did he advise you on how a person with a prosthetic leg walks and moves?

Johnson: Yeah. (I worked on it and) then sought out Jeff after that. I asked him what he thought. Thankfully, he was blown away.  He said, ‘Holy ****, man! That’s exactly how I run.’ It was a special day and a cool moment. I just I hope to do right by Jeff and this character.

Q: Was getting the details right difficult?

Johnson: Well, there’s a lot of things I had to keep in mind playing an amputee, thinking about that every second of every frame of every action of every moment—what that looks like and, psychologically, what that feels like. Walking, there’s a certain hitch in my step, a certain gait that these individuals go through.

Q: How was it fighting with Pablo Schreiber who plays a baddie. He’s a pretty large fellow as well.

Johnson: I really enjoyed fighting with Pablo who is a fantastic actor. I met him for the first time and realized he is a big (dude)! I don’t often look up a bit at guys but I looked up at Pablo and that immediately informed what kind of fight that was going to be. He puts my head through a TV. He takes my (prosthetic) leg off. He puts me through a wall.

Q: How would you describe “Skyscraper” for audiences?

Johnson: At the end of the day we wanted to make a movie about a man who around every corner, in every scenario in this movie, was barely surviving but every inch of his fiber, his soul, his DNA, won’t let him quit, won’t let him stop. He just keeps going.