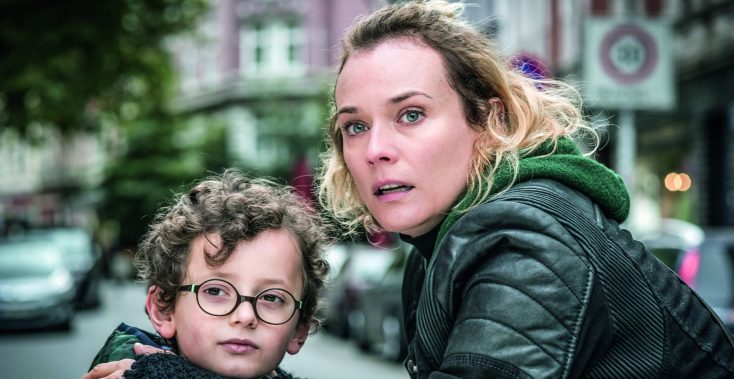 (l-r) Diane Krueger and Numan Acar in IN THE FADE. ©Magnolia Pictures.

HOLLYWOOD—Fifteen years after she made her feature film debut in the American TV movie “The Piano Player,” opposite Dennis Hopper and Christopher Lambert, German actress and former model Diane Kruger stars in her first German language film, “In the Fade.” The drama won the Best Foreign Language film at the Golden Globes Sunday, Jan. 7.

“I always wanted to do it,” says the blonde, blue-eyed actress best known for her role as ship-launching beauty Helen in the Hollywood war epic “Troy.”

In “In the Fade,” Kruger plays a German woman named Katja, whose idyllic family life is upended when her Muslim Kurd immigrant husband and son are killed in a bomb blast. She hopes justice will be served when a pair of neo-Nazis are arrested and tried in court. But, alas, the suspects are acquitted when a so-called witness comes forward placing the defendants elsewhere at the time of the brutal attack, and Katja is transformed from grieving mother and widow to hardened vigilante. She makes it her mission to exact justice on the duo when they flee the country, no matter what the cost.

Kruger received the Best Actress award at Cannes earlier this year for her heartbreaking dramatic performance. The film is Germany’s entry for the Academy Awards in the Foreign Language category.

The actress, who is reportedly dating “The Walking Dead” star Norman Reedus, spoke alongside German-Turkish writer-director Fatih Akin, about making the suspenseful drama, returning to her homeland to act in her native tongue and whether there is a place for vengeance in this world.

Q: Although you are German, this is your first German language film, right?

Kruger: Yes. I don’t have an agent in Germany anymore. But what this talks about is such a global issue. The sentiment of grief, empathy and what my character was going through has a very international appeal. It’s not specific to Germany.

Q: Your character in this film deals with matters of vengeance and justice. Was it difficult for you?

Kruger: I wasn’t sure how to convey and how to resemble the pain my character was going through. I went to a lot of self-help groups in New York and I spoke with survivors and families of terrorism attacks. I wanted to hear and feel what those families went through.

Q: Did those horrific stories affect you personally?

Kruger: Oh, yes, they sure did. They kept creeping up on me. They haunted me in my dreams at night. And soon after I couldn’t think of anything but these stories. I realized what these people went through. Vengeance is something we all have in us, one way or another. The wish of revenge in families that had to endure terrible things can be very strong. And I like that this movie addresses that.

Q: How do you get ready for these intense scenes?

Kruger: The preparation took a very long time. When we started shooting I was ready. I had spent a long time talking about this. I was living in Germany beforehand to reacquaint myself with the German culture. I had left 25 years ago, so I needed to get used to it again. You try to emerge yourself as much as you can. I always felt like my character was real.

Q: Returning to Germany after being away for so many years, how was that?

Kruger: I still go there once or twice a year to visit my family. But being there for a longer period of time was new for me. The neo-Nazis were always there and part of Germany. Now you see them more frequently. Maybe it’s the Internet. But they seem a lot more organized than they used to be. It’s scary when you are there.

Q: Your character goes through an unspeakable tragedy and is so grief-stricken. How difficult was it for you to stay in such a dark mood for such a long time?

Kruger: We shot the movie in order and that helped me tremendously because I always knew where she was emotionally. So, when time had passed and she was ready for revenge, I was ready as well because I wanted to escape this dark mood I had to be in all the time.

Q: How do you feel about this subject revenge vs. justice? Is revenge ever justifiable?

Kruger: I am not sure if I can really answer that question. I think it would do this movie a disservice as well. I am hoping the audience will ask themselves that question. I really hope I will never have to ask myself that question in my personal life. Slowly, walking in her shoes, I started understanding how she acted.

Q: You were a fan of director Fatih Akin before you signed on to this, right?

Kruger: A huge fan. When you go out with him in Germany people come up and ask for his autograph. This guy is a big star back home. And yes, I have always been a big fan. I was excited when he sent me the treatment for this story. I would have played an extra in his film, but he didn’t know that at the time.

Q: Fatih typically has maternal protagonists in his films. Does that attract you to him as well?

Kruger: I wish more directors were like him. It’s a great attitude to have, and you feel very good about yourself. Mothers, to him, are heroes. They have tough jobs, and once you take a kid from the mother, you will find out what real fury means.

Tags:Diane Kruger, Fatih Akin, Germany, In the Fade
Previous PostPhotos: ‘Cell Block 99,’ ‘Flatliners,’ More on Home Entertainment … plus a giveaway!!!
Next PostPhotos: Diane Kruger Returns to Homeland for ‘In the Fade’