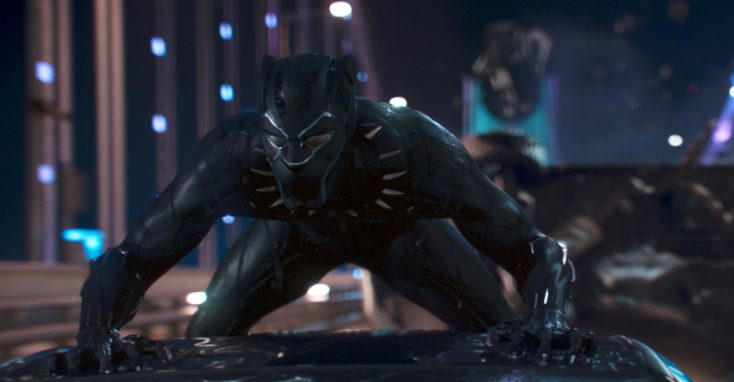 “We were sitting around a table coming up with the story for ‘Captain America: Civil War,” recalls the Marvel Studios head during a press conference to promote the movie. “Nate Moore, our executive producer, suggested bringing in Black Panther, because we were looking for sort of a third party who wouldn’t necessarily side with (Avengers superheroes) Cap or Iron Man. And, almost instantly, we all said ‘Chadwick.’  In my memory—although maybe it was the next day—we got him on a speaker phone.”

Boseman recalls that he was attending the premiere of “Get on Up” in Switzerland when his agent called him with the news that Marvel Studios was interested in casting him in their next “Avengers” movie.

“My agent was like, ‘You’ve got to get on the phone,’ and the crazy thing is I didn’t even have international calling on my phone,” recalls the actor with a chuckle during a press conference. “We heard somebody say, ‘Hey, get international on your phone. Call your mom.’ It’s some important stuff, literally, that happened, and then that night he called.”

Boseman says the initial phone call from producers Feige and Louis D’Esposito, executive producer Nate Moore and Anthony and Joe Russo (who co-directed “Captain America: Civil War”) was one where they told him that they wanted to bring the character into the Marvel Cinematic Universe as a stand-alone movie, and the best way to do so was to introduce the character, who also is an African prince, in “Captain America: Civil War.”

“So, I was aware (of their plans) when I was shooting ‘Civil War,” he adds. “I was not aware that other people weren’t aware that this was going to happen, because it was at the forefront of my mind when we did the introduction. I love the fact that (this film is) a surprise to people.”

Boseman plays stoic and strong Prince T’Challa, who is primed to become the new King of Wakanda following the death of his father (killed in an explosion in “Captain America: Civil War.”) T’Challa’s accession to the throne is put on hold when forces outside his peaceful country lure him out and onto an international adventure. Pushed to the limit and charged with protecting his nation, T’Challa must prevail by any means necessary or risk the lives of his people, a secret, enclosed society with highly advanced technology.

Boseman says he has been intrigued with Marvel’s “Black Panther” series ever since Reginald Hudlin took over the decades-old comic book series in 2005. (Marvel’s Stan Lee and Jack Kirby created the character in 1966.) Further, the idea of seeing Wakanda depicted onscreen in a big budget studio movie (Marvel is owned by Disney) was compelling.

“When you talk about what Wakanda is,” marvels Boseman, “and what it would have to be in order to progress to the place that we saw—even though we’re talking about a fantasy—the idea of an unconquered nation, that has not been tampered with by the various means that it would have been tampered with; the idea of the next generation being smarter, being better than you is a concept that they would have evolved to that so even though we’re in the same generation.”

Letitia Wright plays T’Challa’s smart-mouthed kid sister, who also happens to be a tech whiz that provides his alter-ego Black Panther with his high-tech suit and gear.

“She’s my younger sister. She benefits from whatever I have reached. You want your sons and daughters to be better than you were. That concept is a Wakandan concept.”

“Stan Lee and Jack Kirby’s initial runs through,” he says. “Don McGregor, Christopher Priest, Jonathan Hickman, and it’s on East Coast Black Age of Comics and Brian Stelfreeze’s run was a big part of it as well, so we just kind of grabbed from all. The characters got a long history, and it’s such a rich stuff to mine, and each kind of writer kind of left their own mark.”

One thing that Boseman insisted on about his character was that he speak with an African accent, which he explained at the press conference.

“As actors, you’re trained you’re trained very often from a European perspective. What is considered great or classical is very often British, and it’s certain writers. I happen to come from a background that does not believe that. I went to Oxford to study, but I also went to Howard (University) and we were taught to respect our writers and our classics just as much. I believe that it takes the same skill level and same technique and sometimes techniques that are a little bit different to pull that off. And so, I think you have to tell the stories and be true to yourself as an artist.”

He continues, “That the intonations and melodies inside an African accent are just as classical as a British one or a European one and that all of the emotions and aspects of a character can be shown and expressions can be shown through that accent and so we have to take this opportunity to show that. He just wouldn’t, if his ancestors had never been conquered and he’s never been conquered and Wakanda is what it is. He doesn’t have to go to Oxford to study. He doesn’t have to go to Cambridge or Yale or any (traditionally white higher education institution) to study. He actually got his education at home (in Wakanda) and he would not then assimilate a language that is the colonizer’s language in order to speak to his people, so he had to speak with an African accent.”