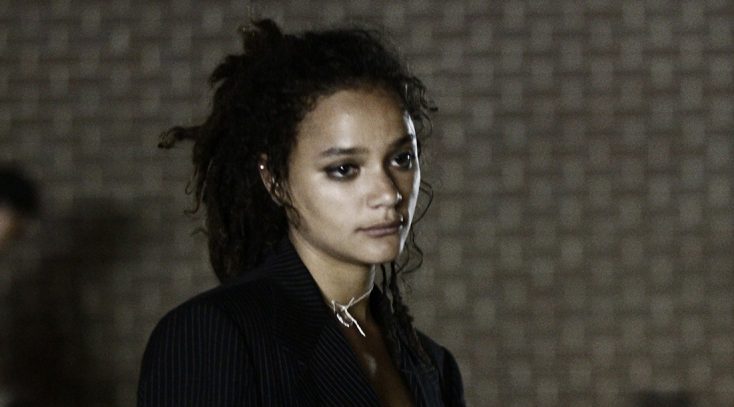 On the road, with Rihanna tunes blasting on the car’s stereo, Arnold took in the wide-open spaces and got to know ordinary hard-working people living from paycheck-to-paycheck and observing regional traditions. As she made her way eastward, she found herself along the Gulf Coast of Florida, watching the annual youth ritual known as Spring Break. Later, after she had written “American Honey,” she returned to that area where she found her young star of the film, Sasha Lane, a college student from Texas, and several other unknowns that fill out the youthful cast of the film.

Sitting cross-legged on the floor of a tent set up outside the Four Seasons Hotel, the Oscar winning filmmaker (for her 2005 live-action short film “Wasp”) spoke about making her latest feature, which examines the subculture of so-called “mag crews,” groups of young people, many of them runaways and high school dropouts, that work together selling magazine subscriptions door to door to make ends meet. Mag crews are nothing new. They were the subject of a 1987 Congressional investigation because of reports of violence, drug use and exploitation of the crewmembers by their bosses. The crews continue to flourish despite a sharp decline in the demand for print magazine subscriptions. While a 2007 New York Times piece that Arnold read depicted a world of squalor, abuse and slave conditions amongst the mag crews, Arnold, through her own research, discovered beauty, hope, community and in some cases, even love, with the mag crew she camped out with for a while.

“American Honey” focuses on Lane’s character, Star, a teenager from a troubled Midwestern home who joins a mag crew led by hard-driving manager Krystal (Riley Keough) and her enforcer Jake (Shia LaBeouf). The 15-member crew travels the backroads and becomes the surrogate family to Star, offering her the freedom and family she has long sought.

The coming-of-age drama won the Jury prize at the Cannes Film Festival this year and was an Official Selection at the Toronto International Film Festival.

Q: Do you miss being on the road?

Arnold: Yes, I’m feeling the need. I’m right in the mood for it right now, actually.

Q: You found Sasha Lane in an unusual place. Can you talk a little bit about finding her, because she was kind of a lifesaver for your film because your original lead dropped out?

Arnold: It was at a gas station. She was sucking a lollipop. No, it was ice cream. She had a dog. We tested each other yesterday. We’ve told this story so many times. We thought we would try and sort of mix it up.

Q: It was on the beach, right?

Arnold: Yes. Each time we speak to people we could just change it and then no one will know what the truth is. But I’m so bad at actually fibbing, so I can’t really, even though we try to do it, we can’t really actually do it.

Q: What was the main quality you saw in Sasha, since she had no previous acting experience?

Arnold: The first time that we saw her she was on the beach with a friend, so she was kind of messing around, and she stood out to me immediately and the beach is full of thousands of people. We’d been there for two or three days, and we hadn’t actually met that many that we felt were the right kind of girl for the part. It’s quite intense, because they’re playing really loud music and having wet bikini competitions behind us and it’s full on down there, Spring Break.

Sasha was with her mates and they were messing around. She stood out. I remember she walked off, and we were discussing her She didn’t know that, but we were saying, “Oh yeah, she looks great.” She disappeared behind some deck chair or something. I can’t remember what it was, but she disappeared, and then we all legged it around to try and catch her, because it’s very easy to lose people on that beach. Also, it’s hard to run across the sand, so we legged it after her.

We were the oldest people on the beach so we must have looked a bit out of place, just generally. Then we chatted for a bit and I think we probably tried to explain that we were making a film. I was very aware that approaching anybody was a bit of a difficult thing, because I’ve seen a lot of people, a lot of men on the beach with cameras looking for girls for—or so I was told, I don’t know how true this is—porn films, so I was very aware that approaching anybody down there was going to be a bit dodgy. We had various things to try to pass it on as a legitimate film, but I can understand girls not really believing that.

Then we arranged to meet later that night in Sasha’s motel to maybe do a bit of improvisation. What I remember very much about her was that she was suitably protective of herself. She asked some questions and things but she was also like, “OK, this could be something. ” She was open. She was not going to pass by a possible opportunity, as it was.

Then there was a gradual process over the days. We did some improvisation that evening with her friends, and then we did some the next day. She was going home the next day or the day after. Then we did some dancing in the car lot with Shawna (Rae Moseley) and Ray Ray (Coulson). Gradually over those times, I could see that she could do this thing and was game and would try things. She was up for it.

Q: How long did it take you to shoot this film?

Arnold: It was about seven weeks.

Q: How did you bond with all the people in the movie because you guys were working together for nearly two months?

Arnold: Everyone got really close, because we went on a real trip from beginning to end and we stayed at the same motels and we all traveled together and nobody came and went. We all went together, did the whole thing together and we’re all making something together, this big project that we’re working on, and we’re also living together and I think the combination of those things, spending all that time and also trying to achieve this very challenging thing.

Q: How did you find your other actors? What were you looking for?

Arnold: I try to cast people who had a lot of energy and light and vitality and life and were very much themselves. I think virtually everybody on that bus is like that. There were many, many others as well. We met some fantastic people.

Q: You grounded this with, you had the non actress and the more experienced actors like Shia and Riley. Can you talk a little bit about casting them and what was the process of getting them on board with this?

Arnold: Riley had heard about the film and she sent some tapes in. She said she sent a lot of tapes in and I think I only saw one and I feel bad now because I think she sent a bunch in. Then we met and from the first moment I met her I just really loved her. Then I met her again in New York. She was so kind to the others. We had a casting session in New York and we had some people there who hadn’t acted before and we were trying them out with her and she was just so generous and understanding. I just love that about her.

A lot of the mag crew managers are people who have come into the mag crew and then got good and it and become a manager. She had this feeling like an ex mag crew kid who had done that and had done well. She felt completely right. She felt like one of every one. She was a little bit older, not much older. She felt like she’d come from the same place as everyone else. Just completely loved her from the moment I met her.

Shia I met in London. All my casting is usually about meeting people and not really looking at show reels much. I like to meet people and just feel how that goes. Casting him was about that. It was about meeting him, mainly. He had a lot of the qualities I thought Jake had, and I could see he could bring. We had a very energetic kind of chat and from that moment again, I just thought, “Yeah, I can see him playing Jake, easy.”

Q: Was it awkward shooting the sex scenes with Sasha and Shia?

Arnold: I always feel weird talking about sex scenes. They’re personal and intimate. I feel it’s almost weird to talk about sex scenes because that’s the moment that we went through and it’s almost like real life. You wouldn’t necessarily go around telling the world about what you were doing with your partner two nights ago. I feel like that about it. I always feel discussing it is a bit strange.