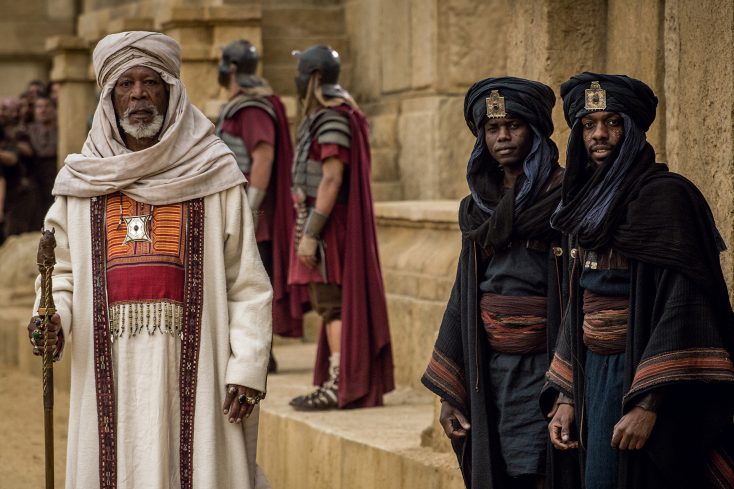 Based on Lew Wallace’s “Ben-Hur: A Tale of the Christ,” “Ben-Hur” tells the story of Judah Ben-Hur (Jack Huston), a prince falsely accused of treason by his adopted brother Messala (Toby Kebbell), an officer in the Roman army. Stripped of his title, Ben-Hur is forced into slavery. Escaping a slave ship after several years, Ben-Hur is rescued by a Sheik named Ilderim (Freeman), who becomes his mentor and benefactor, and eventually teaches the former slave to race chariots.

For African-American screenwriter John Ridley, it was important to have an actor of Freeman’s caliber to show the honor and dignity of the character and make him integral to the story.

“It was extremely important to give this character a voice and make him more faithful to the era and true to life,” he said.

Freeman, 79, who is a noted animal lover, worked with a variety of creatures on location in Italy, including horses, camels and donkey, as his character leads his caravan from town to town competing in chariot races.

Born in Memphis, Tenn., Freeman began his career on the New York stage in the early 1960s, after a stint in the Air Force. He earned Oscar nominations for his performances in “Street Smart,” “Driving Miss Daisy” and “The Shawshank Redemption.” He finally took home Oscar gold in 2005 for his supporting role in Clint Eastwood’s “Million Dollar Baby.” He was nominated for his spot-on depiction of civil and human rights leader Nelson Mandela in 2010’s “Invictus.”

The acclaimed actor spoke about reuniting with “Wanted” filmmaker Timur Bekmambetov to star in this remake, which has more of Jesus (played by “300’s” Rodrigo Santoro) and why he continues to work at a steady pace when other men his age are more inclined to slow down.

Q: Did you have any hesitation in taking a role in this movie because it’s a remake of a classic movie?

Freeman: No! All the more reason to do it. It’s a reimagining of a story that’s already been told three or four times. At least twice before in movies. I worked with Timur before. I know he’s very innovative when it comes to special effects and stuff like that. I couldn’t see how it was not going to be an exciting adventure.

Q: How much does the costume—in this case wearing the dreadlocks—inform your character?

Freeman: I took the job mainly because I got to wear these terrific costumes and wear this extraordinary hair. You take work primarily because it’s going to pay you because that’s your profession. That’s how you do it. And it’s going to somehow fulfill something in you, work-wise. It’s all right to say I enjoy wearing the costumes. It’s part of the job.

Freeman: It wasn’t at all. It was very comfortable. The man who created the wig is the same guy who created for “Driving Miss Daisy,” interestingly enough. He’s one of those Italians whose family has been making wigs for generations. They’re very good at it. The first day I got to the set, you go and get your final costume fitting and get hair and makeup. I was going to try this wig on and see how I like it.

Q: You’ve worn dreadlocks before for a role, right?

Q: What was it like working with the horses? None of them got hurt, right?

Freeman: No. Of course not. That would be an absolute no-no. Nobody is going to rent horses to you today with the idea that you’re going to do something (bad) to them. The ASPCA watches what happens on set. You can’t even hurt a cockroach on a movie set. Did you know that? When we were making “Se7en,” in the scene about the gluttony guy, I shined my light on the cockroaches, and there was a cockroach wrangler. You do not hurt anything that you use in a movie. If it lives, it had better be alive when you are done. I am as serious as cancer! That includes maggots!

Q: There was a scene where you were shooting and the horses were misbehaving and you had to reshoot that scene?

Freeman: The only thing animals I remember not cooperating were the camels. We were trying to shoot this one caravan scene. It was going to be a mile-long scene of donkeys, camels and people and the camels did not cooperate. (He laughs.) There were six or seven guys trying to control these camels and they were having none of it. It’s clear that they didn’t want to deal with humans.

Q: This is a role that Hugh Griffith won an Oscar for in the 1959 version of “Ben-Hur.” His performance was very comic. And he was Welsh. So was part of the attraction playing an African character and as an African-American, you’re better suited to play the role?

Freeman: Absolutely! I didn’t know it was an African character (in the book). I never read the book. In the book, they wanted to call him Arab. One of the things I asked Timur for was one of the lines, “I am not Arab!”

Q: What do you think of the themes in the movie against that?

Freeman: It’s part of the full tapestry of the film. Over here you have people that are looking for revenge and over here is a man looking for salvation. We’re looking for a world where we feel safe, all of us.

Q: Do you see this as a religious film? In the ’59 version we never see Jesus, but in this he is a central character.

Freeman: Yeah, but that is the story of Judah Ben-Hur. When I spoke with Timur on the phone about it, he was telling me he wanted it to have more depth and have more of a spiritual quality to it. He wanted it to be more humanized. I said, “Fine, Timur. That’s good.”

Q: In an age of superhero movies and Pokemon Go!, how do you think audiences will relate to or find appeal in “Ben-Hur?”

Freeman: You have different audiences. You have the youth factor. They are going to flood your superhero movies, action movies, where “Follow me! Wait here!” is most of the dialogue. And then you have this kind of world-renowned epic story that, in itself, is heroic, which usually will appeal to a broader audience. That’s the essential difference, I think. How broad can an audience be for a particular film or story?

Freeman: Yes, he’s very very good at that. You’ve got so much great technology. You can’t beat a GoPro.

Q: You played God how many times?

Q: Was it frustrating to be in this movie to play opposite Jesus?

Freeman: No, now that I think about it.

Q: You filmed this in Italy for several months. What did you do during your downtime?

Freeman: I was staying at this very nice hotel, the Cavaliere. I could see the Vatican from my hotel window. They have on the seventh floor a very nice lounge to hang out. It’s quiet. People don’t come running over to you with their cameras and want to take pictures. There was a nice lady who ran this part of the hotel and our favorite restaurant, Luciano’s. Oh man, it was so great there. That was about it. I’m no longer able to walk the streets in any city of the world that I’ve been in.

Q: Your fans are everywhere?

Q: But that’s been the case for a long time now?

Freeman: For a good while, knock wood.

Q: Is it for your body of work, or is it two or three films that they remember you in?

Q: Since you are Morgan Freeman, have you ever not gotten a role you wanted?

Freeman: Yeah. Probably one of the misperceptions about being an actor is that people think you can do whatever you want to do. Nope. You can’t. Clint Eastwood can’t do what he wants to do. It doesn’t work that way.

Q: What do you look for in a character these days?

Freeman: Money … and a nice place to stay.

Q: Speaking of Mr. Eastwood, have you spoken with him lately? Do you stay in touch with him?

Freeman: Yeah, we had dinner together not too long ago. We’re constantly trying to find some work to do (together).

Q: Do you ever think of stopping? Just hang out on your boat?

Freeman: No. I’m not going to stop. I’m going to be stopped.

Freeman: Yeah, when the phone stops ringing. That’s when I’ll say, “OK, it was as nice ride. Thank you very much.”