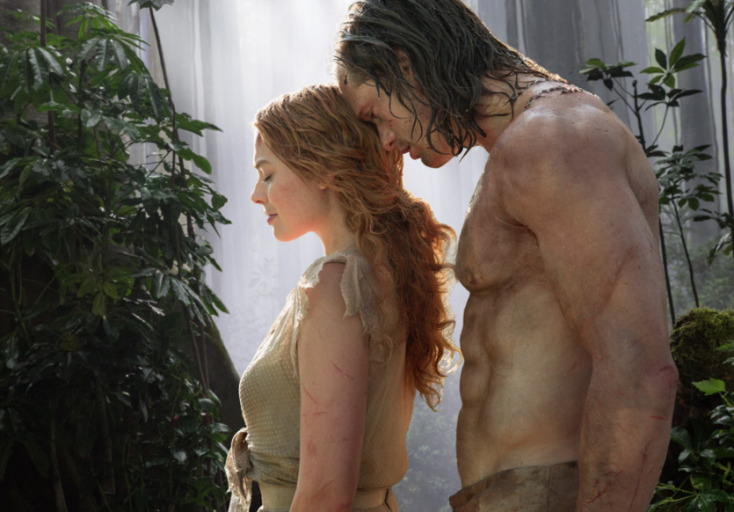 HOLLYWOOD—Alexander Skarsgard joins the ranks of notable Hollywood actors including Jock Mahoney, Johnny Weissmuller, Ron Ely and Christopher Lambert who have portrayed the legendary jungle hero Tarzan on the silver screen. The star of the new action-adventure “The Legend of Tarzan” couldn’t be more delighted to join such a distinguished group.

“I was actually a big Tarzan fan as a kid and the old Johnny Weissmuller movies because of my father who is one of the biggest Tarzan fans out there,” the Swedish actor explained during a recent press conference to promote the movie.

His father is none other than Stellan Skarsgard, who has appeared in numerous Hollywood movies including “Thor,” “The Avengers” and “Good Will Hunting.” Audiences may know him best as doomed pirate Bootstrap Bill in the “Pirates of the Caribbean” movies.

The tall, handsome Swedish actor, known for his work on HBO’s “True Blood,” had no trouble bulking up to show off rippling muscles as Tarzan, although he successfully argued to director David Yates (four of the “Harry Potter” films) to nix the loincloth in favor of a more modest sarong-like covering.

Yates directed the film from a screenplay by Adam Cozad and Craig Brewer from a story they wrote based on the Tarzan characters from author Edgar Rice Burroughs.

The 39-year-old Skarsgard stars alongside Margot Robbie as Jane, Christoph Waltz as a dangerous envoy for the greedy King Leopold of Belgium, Samuel L. Jackson as George Washington Williams, an American representative sent to the Congo with John Clayton, Lord Greystoke (Tarzan’s British identity) to document suspected slave trade activities, and Djimon Hounsou, who plays a tribal chief who has a vendetta against Tarzan/Lord Greystoke when he returns to the jungle after years back home in England.

Skarsgard: When I read the script, I was a huge fan of Tarzan and I was really excited when I heard that Warner Brothers and David were making this movie. But then, of course, it’s been told 200 times over the past 100 years and you always have to ask, “Why are we doing it again? What’s the motivation? Why are we embarking on this two-year-long adventure?” But you open the script and it’s John Clayton drinking tea with the Prime Minister. I just thought it was so brilliant in the fact that it’s more about returning to your roots than taming the beast. I thought that was so smart the way that Adam Cozad wrote that.

Q: Was there ever a time when you thought “I won’t take the role if I have to do this?” Did you worry that you might have to wear a loincloth?

Skarsgard: I was trying to get a little sexy loincloth. I was trying to convince David (Yates, the director) for weeks when we were doing prep and unfortunately, the way the script is written, it opens in London, it’s Victorian and he’s acclimated to life in London then he goes back (to the jungle) and David was like, “It doesn’t make sense. That little loincloth’s got to go.” It shows up after that when he swings through the trees but it’s more like a little mini-sarong.

Q: Can to talk about your workout routine and eating pasta with your dad?

Skarsgard: It was different phases. The first phase was three months of bulking up while I was wrapping up “True Blood” here in L.A. so it was Tupperware with 700 calories a day, steak and potatoes, that kind of stuff and weightlifting. Then, when I got to London about a month and a half before we started the movie, I had a great opportunity to work with Wayne McGregor who is one of the biggest choreographers in the world and that was one of my favorite parts of the whole experience was working with Wayne on the physicality of the character. It was very important that Tarzan is flexible and agile when he moves through the jungles and that he doesn’t look like a body builder so even though I wanted to put on some weight, the goal wasn’t just to get buff, it was to look athletic.

Q: How was it working with Margot Robbie as Jane?

Skarsgard: Margot and I worked a lot with Wayne together on just trust exercises and we played games and would recreate scenes of how they met that aren’t in the movie and it was so nice to have that because we have so little screen time before we are torn apart in the movie so it was so nice to build that relationship off camera so that when we have those moments, hopefully the audience will feel that we have a deeper connection and we’re so comfortable around each other. That was just the most amazing thing. And, of course the diet was horrible but I’ve got to give credit to Guy our chef who really tried to make it (tasty). He’s an amazing artist chef but he had his hands tied because this was like no sugar, no dairy, a very strict died so, when we wrapped the movie, my father was shooting this Netflix mini-series “River” in London at the time and I got in my car and went straight to his house. My dad loves to cook so I spent four days on his couch just being fed. It was the most incredible week of my life. It was bone marrow, fried mozzarella, pastries and red wine.

Q: There hasn’t been a live-action Tarzan in more than 30 years. What’s your relationship with Tarzan? Any favorite Tarzan movies?

Skarsgard: Every Saturday my dad and I would go to the matinee in the small town in Sweden where he grew up and watch the old movies, so he introduced me to Tarzan and that’s how I fell in love with him, the jungle and that whole world. I was very excited when I heard about “The Legend of Tarzan” project.

Q: Was interacting with the CGI jungle animals a challenge?

Skarsgard: We were slightly worried there for a second, weren’t we, when we were on the Savannah and there’s a scene with the big male lion running across the Savannah and there were two guys holding a cardboard cutout of a lion and they were running like this (indicates a silly run) and Sam (Jackson), Margot and I were like “This is going to be a great movie. They really went all out on this one.”

Q: Do you practice martial arts, jujitsu or anything like that?

Skarsgard: Not really. There are some things in this movie I can’t really take credit for. It was a long, intense training period to get ready for the role like I mentioned earlier but the really cool stuff in the movie we had a trapeze artist come in and do. Those incredible stunts on the vine. We obviously did quite a bit of the vine swing ourselves.

The scene where Sam (Jackson) is riding on my back is real. That amazing stunt, we pulled off but I was just blown away when I saw the movie because it was so crazy what they can do with technology today. They had a 3D scanned version of my body then they Augusts Dakteris, one of the greatest trapeze artists in the world come in. I don’t know how tall he is but he’s very short and it was a circus. We sat there with our coffees and watched him do these amazing stunts on the vine then they would just remove his body, use his movements and replace it with my body. I’m watching the movie and I recognized myself doing these like Olympic stunts where I’m like, “Should I take credit for this? I’m awesome.” But I think Augusts deserves all the credit for sure.

Q: You have an intense hand-to-hand combat scene with Djimon Hounsou, who plays Chief Mbongo, who has it in for Tarzan. What was that like?

Q: This wouldn’t be a Tarzan movie without his trademark jungle call and, thankfully, it happens twice during the movie. Was it actually you doing it? Was your voice enhanced?

Skarsgard: It was a tricky one because you obviously have to have it in the movie otherwise people would be like “Where’s the call? It’s not in the movie.” But also, when you watch the old movies, they are quite dated and especially the call. It comes in these moments when he’s hunted and you definitely don’t want it to be a comedic moment. That kind of (he warbles like Tarzan) it would just take you out of the movie watching it so I didn’t come up with the idea of doing it the way it is now but I think it’s really smart to, instead of having a cheesy shot of Tarzan doing the call, you see the impact on the antagonist’s face—Christoph’s (Waltz) face—because it makes it more eerie and haunting. I thought that was really smart, having it in the movie but you kind of avoid it being cheesy or comedic, which would be even worse. I did the call for sure but it’s kind of a hybrid.

Q: This role is so iconic. Landing it must have been like landing Superman or James Bond. How did you feel the moment you got the role?

Skarsgard: I was actually on a sailboat in the Canary Islands about to said across the Atlantic and I was looking forward to three weeks of being off the grid entirely with no e-mail or cell phone or anything and I was on the boat, we were getting ready to push off and David called me and said “It’s looking good. I think we’re going to do this” so that was quite exciting. I was pretty stoked when I got off the phone and set course for America to sail across the Atlantic. It was an incredible moment.

Q: How did you celebrate?

Skarsgard: I celebrated by just sailing for three weeks from the Canary Islands to the U.S. It was an incredible experience.