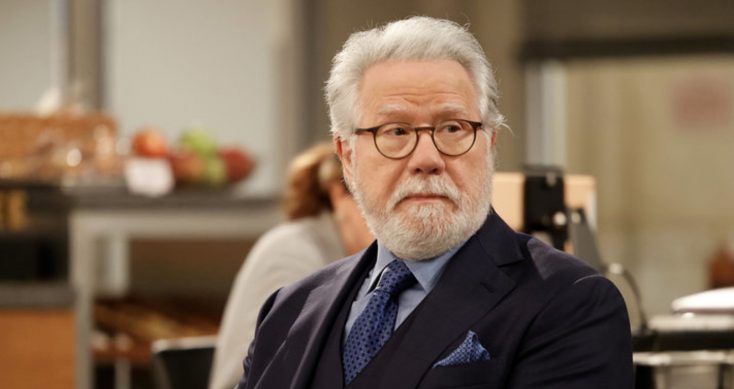 Now, 31 years later, “Night Court” is back in session, along with

John Larroquette. But this time his character Daniel Fielding is reluctant to return to his old job.  However, when the late Harry Stone’s daughter Abby (Melissa Rauch, “The Big Bang Theory,” True Blood,”) who is the judge now, approaches him he agrees to take on the new position of public defender.

The series premiered last Tuesday and was embraced by the audience with 8 million viewers. The comedy airs on NBC at 8 p.m. ET/PT on Tuesday evenings. John Larroquette joined the TV Critics Association live at the Langham Hotel in Pasadena to talk about returning to his iconic character, for which he won four Emmys.

Q: What was your reaction when you were first approached to return to the role of Dan Fielding in “Night Court?”

John Larroquette: My initial reaction was, “That’s funny. Talk to you later.  Bye.” The idea of trying to revive something that you did 35 years ago when you were young, agile, acrobatic and maybe funny, to try at 75 years old to go back seemed a real error in judgment on my part.

My ego as an actor perked up and said, “Hold on a second. How often does an actor get a chance to revisit some character that he played three-and-a-half decades ago? And what was the length of that journey and what happened to him in his life?” And that became interesting to me, of how he might appear in 2022 as opposed to 1992, when we last saw him. So, it became an exciting problem to solve as to how he can be funny at 75, even though he was still funny at 35 but in a different way.  So, we worked on that, and you’ll be the judge of whether or not it actually worked.

Q: What was it like getting back into character? Was it like putting on an old suit?

Larroquette: I couldn’t put on the same suit because I weigh much more than I did then. It was a task to figure out what’s happened to him, where is he in life, and how is he still funny? What’s still funny about him? I think his arrogance, the fact that he still thinks he’s the smartest person in the room. He doesn’t have the hunger that young Dan Fielding had. He’s had a love life. He’s had a marriage. He has lost his wife, as we find out in the first episode. So, he’s an old man who has withdrawn from life considerably and is fairly content, although we discovered that not totally when this young lady shows up and he discovers that indeed there is a real bond between the two of them. Considering that she’s Harry’s daughter is the only reason he comes out of his apartment. So, it was a journey finding the jokes again. And that’s all this show is, and I’ll never claim to be ashamed of that. It’s to try and make you laugh, and if we can make you laugh, then we are successful.

I always thought of “Night Court” as a vaudeville act, that we created our own reality. As an example, there was an episode where a ventriloquist was on trial and his dummy — not the ventriloquist — committed suicide.  And if you’ve got a ventriloquist dummy being able to commit suicide, then you are not really dealing with everyday facts and figures. So, anything that they thought was funny, if it made the audience laugh, it did not matter if it was based in reality or not, although, the family of us, we were always, I think, based in reality.

Q: Can you talk about Dan changing sides from being a prosecutor to a public defender?

Larroquette: The fact that he’s changing sides now is a learning experience for him, because the first few cases he’s talking about how horrible these people are, and [Abby] has to remind him, “You are defending them.” “Oh, right.” So, he has to switch gears, which gives him a bit of an exercise that he has to do intellectually to actually have sympathy and empathy for the people that he is defending.
Q: What is your fondest memory of working with Harry Anderson?  And do you think he would love this incarnation of “Night Court”?

Larroquette: Only if he was in it. (everyone laughs.)

There’s so many. But the fact that he was always performing for us, because in a sitcom you sit around a lot while they’re blocking, et cetera, so we had a lot of time just to be friends and talk to each other. And he had an interesting history and an interesting life. He worked in my hometown as a busker on the streets of New Orleans just doing his magic act with his hat on the sidewalk.

The word “family” is thrown around a lot. We enjoyed each other.  We were together a long time.

Q: With the original series, you famously removed yourself from Emmy consideration after winning four straight times way back in the day.  Are you permanently recusing yourself from all future recognition for playing Dan Fielding, or if people like this, are you ready to get back in the game?
Larroquette: I don’t know how it works these days, but one of the ways that I was able to withdraw myself in those days was the actor had to submit an episode for Emmy consideration. Producers couldn’t do it on their own or the studio. I guess that changed to where they could. If that’s still the case, then I’m not going to be in control of that, necessarily, although I’ll make my feelings known. I was most fortunate and grateful for the recognition that my contemporaries at the time were giving me for that character, but there comes a time when I like to say, “Dude, I don’t want to have to wear a tuxedo and not win,” after four in a row. To show up just for the rubber chicken after the broadcast is not really it.

But seriously, I thought Fielding was a good character. He was a Barney Fife of the day. He had an impact on the show.

I would love to be part of this show as best I can. I’ve described myself as the designated hitter where I can come in and knock a good double out into the center field and score some jokes but leave the rest of it to the youngsters