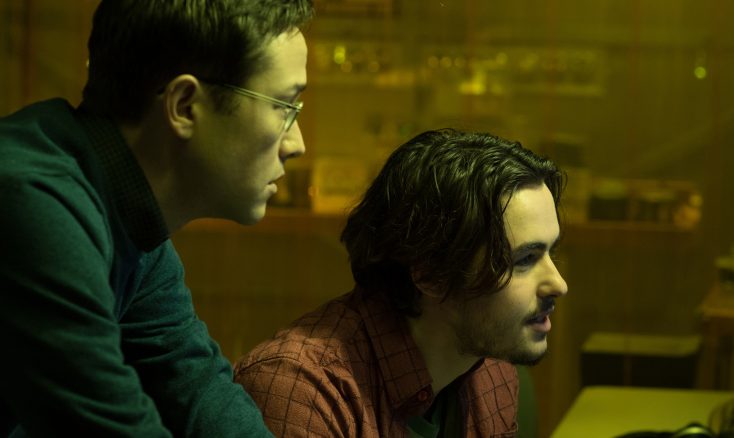 HOLLYWOOD—Not only does actor Joseph Gordon-Levitt bear a striking physical resemblance to the infamous government intelligence leaker he portrays in “Snowden,” he also is versatile enough to deliver a performance that is not about imitation, but about capturing the spirit of a once devoted American patriot (Snowden served in the U.S. Army before becoming a CIA agent and then worked for a private government contractor prior to leaking top secret documents to the press) who felt the need to expose secrets involving covert U.S. government surveillance operations.

The 35-year-old actor is known for his ability to slip into any role in any genre whether it’s a science-fiction brain-twister like “Inception,” a romantic comedy “(500) Days of Summer,” a historic epic like “Lincoln” to over-the-top comic book adaptations “Sin City: A Dame to Kill For” and “The Dark Knight Rises.”

The film’s titular star spoke about portraying the controversial figure—whom some regard him as a traitor, while others consider a heroic whistleblower—who is living in hiding in Russia following his release in 2013 of classified documents to a British journalist and to a documentary filmmaker who recorded the events leading up to his revelations.

Q: You already resemble Edward Snowden, but was it important to capture Snowden’s voice for the role.

Gordon-Levitt: I don’t know if I started from there, but I was certainly focusing on that, as I was also focusing on his internal life and what he was going through and what his history is and just what kind of guy he is and why he was doing what he was doing. Certainly when you’re playing a character that everyone has seen and heard, I feel like it would be almost odd if you didn’t sound at least something like him, so I wanted to try to approximate his voice.

Q: When did you meet him? What did you take away from your meeting?

Gordon-Levitt: A few months before we started shooting I went to Moscow and I sat with him and Lindsay Mills, his girlfriend, who’s played in the movie by Shailene Woodley. We all talked for about four hours. It’s funny, because he’s always trying to take attention off himself personally and put the attention on the issues that he brings up, but I’m an actor so I’m obviously going to focus on him personally and want to get a sense of who he is just as a guy. Getting to spend that time with him was really valuable for those reasons.

One of the first things I noticed was he actually has really good manners, which I found surprising, because nowadays you think of someone who’s talented on computers not necessarily as someone with social grace, but he’s from North Carolina, where I think they put more emphasis on good manners than where I’m from, in Southern California. (He laughs.)

He’s not a social butterfly. He’s not the kind of guy that’s going to go charm a whole party full of people, but he is sort of an old-fashioned gentleman, and I thought that was remarkable. I wanted to incorporate that into my performance.

Q: Was there something he wanted you to get across in your depiction of him?

Gordon-Levitt: No. He doesn’t care about himself, really. He wants people to talk about these issues. That’s what he wants.

Q: Is he resigned to the fact that he’s basically not going to be able to come back to the U.S. any time soon? Is he happy? Frustrated? What was his general demeanor about how he feels about the situation now, because it’s been a few years? How is he doing emotionally?

Gordon-Levitt: I know he doesn’t want to live in Russia for the rest of his life, that’s for sure. He is encouraged by the changes that have happened since he made his disclosures. The USA Freedom Act was passed. His first leak revealed that the NSA was recording every phone call in America and a Federal court ruled that unconstitutional and that program was ended. So that’s progress. The former Attorney General (Eric Holder) sort of admitted that what he did was a service to the country. Even the President (Obama) has admitted that in certain respects, the government was overreaching. There really has been a turning of the tide, and I think he’s encouraged by that and feels the sacrifice he made wasn’t in vain.

Q: Is there anything in the script that you felt like was most important in defining the character for you, since you were trying to not just explain what happened to him and the whistle-blowing but just his humanity?

Gordon-Levitt: This is a drama, and every drama hinges on a person changing. The real life story of Edward Snowden is an incredible drama and not just the moment of his whistle-blowing. This story shows the nine years leading up to that. For example, I didn’t know before doing this project, that he enlisted in the U.S. Army in 2004 and wanted to go fight in Iraq. I discovered that he is the kind of guy that feels very strongly about what he believes in and is willing to risk his life to fight for what he believes in.

The change that happens you see that early in the movie. It speaks to two different kinds of patriotism and I consider him very much a patriot. There’s one kind of patriot that just believes that everything their country does is right no matter what, without asking any questions, and there’s a different kind of patriot who believes and loves the country for what it stands for, but also is willing to hold the government accountable, and if the government deviates from those foundational principals, to take it to task.

That is what’s so beautiful about the United States of America. This is why I’m so grateful to have been born and raised here is we have that privilege. Not everyone in every country in the world has that privilege, to hold the government accountable. The founders of the country wrote The Constitution and The Bill of Rights to protect our ability to do that, to hold the government accountable. To me that’s real patriotism in the United States and so watching that journey of someone who goes from that first unquestioning, blanket allegiance, I guess you could call it, patriotism, to the kind of patriotism that I think the United States of America is really built for, which is the kind of patriotism that holds the government accountable, to stick by its principals, that’s an incredible journey to see. On the one hand that sounds heady, but ultimately it’s quite an emotional thing. I think a lot of our feelings about this stuff and our opinions are mostly guided by our emotions, and then our intellect catches up to find reasons to justify how we emotionally feel. It’s much easier to change your mind intellectually than it is to change your gut feeling. It takes years. That’s what you see in this drama. You see that evolution.

Q: How was it working with Oliver Stone?

Gordon-Levitt: I think that Oliver is the only filmmaker who could have done this. If you think about it, he’s the only director in American cinema, and I mean big, mainstream scale, large production, Hollywood, entertaining movies, who’s willing to outright criticize the government. That’s the exact kind of patriotism I was just talking about. There isn’t really another filmmaker who’s done that so pointedly and so courageously as Oliver Stone. If you’re going to tell the Edward Snowden story, he’s really the only guy to do it.

Q: Do you feel like they’ve enforced the new rules that have been placed now in terms of gathering data on people, or do you have a band-aid over your web-cam as Snowden did?

Gordon-Levitt: I just told you that the program that was collecting metadata on all the phone calls was shut down. That doesn’t mean that everything got shut down and that’s not to say that data about you isn’t constantly being collected. It still is. Not only by the NSA, by the way. In fact probably the ones collecting the most data are private companies, and we agree to let it happen. We all click to agree to those terms of service, Facebook, Google, etc.

I’m not saying that those companies are necessarily bad for doing it, but I will say that before doing this movie, it’s something I never really even thought about. Nowadays, when I click that box, I try to take a minute to understand what it is I’m agreeing to. You probably can’t understand all that legal language, only a lawyer could. That’s I think a problem and something we should change in our culture, that we all just agree to these huge legal contracts that no one really understands. I hope that it becomes more customary that these tech companies go out of their way more to make it clear what it is their doing. The reason they don’t is because the way they make money, they don’t really want people thinking about the way that they are making money.

They say they’re offering this thing for free. Trust me, they’re not just doing it out of the kindness of their heart. They’re making money. Again, I’m not saying that it’s wrong for them to make money but I’m just saying it’s good to be aware of how it’s happening.