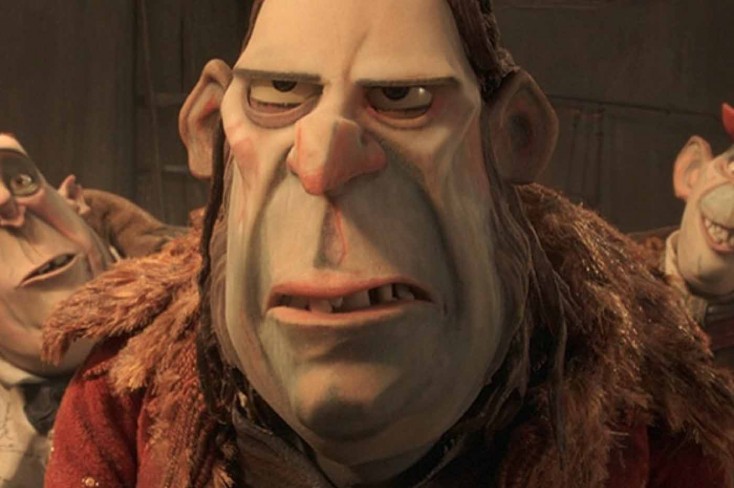 ***NOTE TO EDITORS: Kingsley uses the word “damned.” You may want to edit for your publication.***

HOLLYWOOD—When Sir Ben Kingsley arrived at the studio to record his lines as the villainous Archibald Snatcher for the animated feature “The Boxtrolls,” he began his session standing at the mic but soon stopped and asked for a recliner to be brought in. The Oscar winner wasn’t being a prima donna; he was trying to get the sound of his voice exactly as he wanted it for the character, and he wasn’t getting it standing up. The recliner helped bring the high-pitched Cockney sound out of the veteran performer, and he recorded the rest of his dialogue in the prone position.

While he is best known for his depiction of one of recent history’s most renowned pacifists (in “Gandhi,” for which he won an Academy Award), the British actor has made a career of late playing dark, violent characters (most notably Don Logan in “Sexy Beast”). His Snatcher characterization in Laika’s latest stop-motion animated feature is no exception. Based on Alan Snow’s bestselling fantasy adventure book, “Here Be Monsters,” “The Boxtrolls” tells the story of a divided town—the humans, who are governed by a cheese-loving, white-hat wearing ruler named Lord Portly-Rind (Jared Harris), and the shy creatures that live in the shadows called Boxtrolls.

Snatcher wants nothing more than to join Portly-Rind and his fellow White Hats in the seat of power. To obtain that coveted cap, he offers to exterminate all of the Boxtrolls, who are rumored to have kidnapped a baby, but whose only offense against the humans is gathering their unwanted junk at night to take to their underground cave where they repurpose it. As Snatcher and his gang of Red Hats begin rounding up the Boxtrolls, the creatures, led by a boy they’ve adopted called Eggs (voiced by Isaac Hempstead Wright), hatch a plan to exonerate them of the crime, with the help of the mayor’s rebellious daughter, Winnie (voiced by Elle Fanning).

Anthony Stacchi and Graham Annable directed the stop-motion animated film from the adapted screenplay by Irena Brignull and Adam Pava.

Kingsley, 70, recently spoke about his unique recording setup and what he liked about being part of the Laika production.

Q: The directors were surprised you would agree to do this. Why did you want to do this?

Kingsley: I don’t know why they were surprised. I’m an actor. It’s my living. If the script is good, why not? I don’t want to shove myself into a corner. You can be a bit damned about being a serious actor. It’s nonsense. There’s no such thing as a serious actor. Well, bad actors are quite serious. They take themselves very seriously.

Q: Doing voice work, you don’t get to interact with other actors so how important was it to know the other roles to react to?

Kingsley: I read the script from beginning to end several times. It’s an immensely enjoyable script and beautifully written. The psychological journey of each character is sound, especially the extraordinary debate within the film as to whether (the Red Hats) are the goodies or the baddies. It’s a very very brave device where certain characters step outside of the narrative and then step back into it. They’re constantly reminding the audience it’s a fable. They’re trying to tell you a story in the same way that Grimm’s fairy tales do or as Charles Dickens did or as Shakespeare did. So, reading the script was a vital and deeply enjoyable exercise. I have to be very well aware, as the dark force in the film, what light is struggling against me. And, to be the dark force struggling against a whole tribe of wonderful creatures—life-affirming, life-advancing, creative, sweet creatures and two kids—I had to bring a force and an energy to the piece that would allow the children to fight back. If I, as the dark force, am weak, it lessens their heroism. So I needed to liberate my own voice, find a different voice, and not rely on physical gestures in my speech, no mannerisms whatsoever were recorded. All of that was done remarkably in the (animation) studio thousands of miles away.

Q: You’re character is pretty dark, but I would say the White Hats are even darker because they don’t care about the people they govern.

Kingsley: Yes, they’re massively complacent. The cheese that they hoard is a metaphor for the emblems of power. That’s why it’s there. My character is allergic to that which he craves. It’s a very common condition, I’m sorry to say.

Q: Did the fact that adults will enjoy this on a whole other level appeal to you?

Kingsley: Very much so. The soundness of it rings true on so many levels. Dramatically, the devices that are used are absolutely superb. The debate between good and evil that goes on between those two henchmen of mine is quite remarkable. It’s almost like Bertolt Brecht. He’d have a character step out and talk to the audience. They’d do soliloquies, and then step back in. (“The Boxtrolls”) is using the same device. So instead of pushing you out, it pulls you back in, deeper.

Q: What was your thought-process in creating Snatcher?

Kingsley: I had to leave the mannerisms to the animators. All I could do was raise my voice a few octaves and use that with a Middle-European accent. I had to allow myself to be completely free. Were I trapped in a physical performance, I would have found it very inhibiting, because I would have been judged on how successful or abysmal I was at being (Snatcher’s alter-ego) a female impersonator. But because I could raise my voice a couple of octaves, having been a singer in the past, I can do that. So I just did it vocally.

Q: How did the reclining chair in the studio come to be?

Kingsley: I arrived at the studio and came up with it within minutes. I could hear the voice in my head but it was quite frustrating that it wasn’t coming out of my body. Snatcher’s physical shape and mine are very different. So, his voice would come out from a different place. I sat down and it wasn’t quite working, and then I said, “Guys, can I just try reclining?” As soon as I reclined, the voice came from the right place in me.

Q: Isaac said he was a little intimidated by you. Did you pick up on that?

Q: Do you want to do more animation voice-over work?

Kingsley: The world has diversified so much. It’s accelerated at an extraordinary rate over the past few years. It’s a very different world from when I first stepped on the stage in my 20s, where the outlet for the actor, I thought, was you go on stage and you reach an audience, and then maybe a film, if I’m lucky, and maybe a bit of television. Now, you can be on a series on Netflix. You can be anywhere and everywhere. You can do a commercial for an automobile. You can be in a videogame. You can be a voiceover in animation. There are so many doors that are open.

Kingsley: My wife and I have our own production company, and we have about six films on the slate. Either both of us or one of us is in each of the films. In tandem with that, I am recording Bagheera for “The Jungle Book,” with Jon Favreau (directing). Then I go to Toronto with one of my favorite films coming up called “Learning to Drive.” I’m really looking forward to that. Then I go to Morocco and start work on a TV series. It’s a six-part TV series, six hours of television on ancient Egypt and Tutankhamen. It will be quite beautiful. It’s Spike TV. It’s their first miniseries and they’re determined to make it really classic.

Kingsley: That’s a great template, but not rooted in an invented mythology. It’s rooted in history. There is a tomb. We know the characters around him. There are carvings of my character in existence. It’s fascinating.

Q:You were in Marvel’s “All Hail the King.” Are you hoping to reprise the Trevor Slattery character in “Iron Man 4,” or is your collaboration with Marvel over?

Kingsley: The doors are wide open. Start a rumor. Start a small riot. Bring back Trev. (He laughs.)

Q: Troll dolls have been popular with kids for several generations. What toys did you play with as a kid?

Kingsley: Train sets. I loved building things. Before Lego, there was Meccano. I loved to play with that. Then, later on, I used to buy kits that you could assemble of very famous original early motorcars like a Model T Ford or a Silver Ghost Rolls-Royce or Mercedes or Bentley 4.5 liter. They were tiny models that I used to glue together. Solitary. Solitary, actually, now that I think about it. I didn’t actually play with others. I would find my own corner in my home and be by myself.

Q: Being a builder, can you appreciate the painstaking effort that the Laika animators put in to the stop-motion work?

Kingsley: Very much. The thing about the stop-motion and the thing that will draw audiences into the film is that it is literally handmade. There’s such a difference between this and computer-graphics. Human hands are doing it all the time. I love the end sequence (where the animators are shown moving the characters little by little). Amazing!