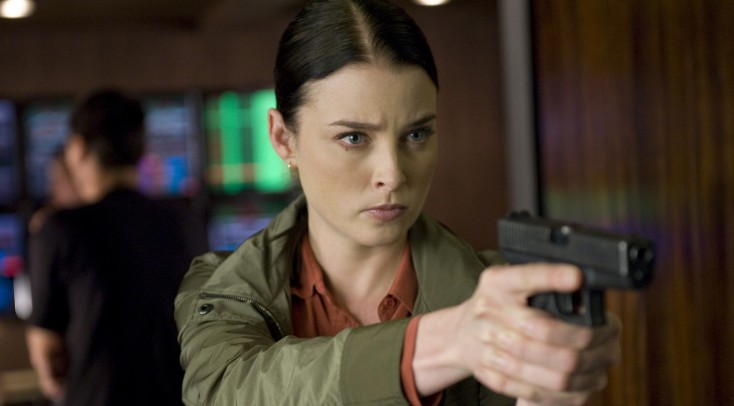 HOLLYWOOD—Minutes after a press conference to promote her newest movie “Alex Cross,” Rachel Nichols is out of her designer duds and back into jeans and a t-shirt, plopped casually on a love seat in a ritzy Beverly Hills hotel.

“I love to be comfortable,” she says, her long legs crossed and her dark hair loose around her shoulder.  “I’m fortunate that I’m tall so I don’t always feel the need to wear heels, which is nice. I think it’s the Maine girl in me.”

Nichols, 32, has come a long way from The Pine Tree state, where she played sports in high school. Today, she is one of the most in-demand Hollywood actresses, often appearing in action films, including “Star Trek,” “G.I. Joe: The Rise of the Cobra,” and “Conan the Barbarian.” She usually plays the love interest to the hero.

She laughs when it is pointed out she has been in more action movies than many male counterparts.

“I love the physicality and the physical roles,” she says. “It keeps me in shape, which is also handy.”

Q: It’s interesting that Monica and Tommy are keeping their relationship secret from Alex, not the department.

Nichols: Alex and Tommy have known each other since they were kids and they were best buds, and Tommy has a line, “Alex can smell what you had for breakfast from 500 feet.” It’s that thing of lying to your best friend, and in my case, lying to my boss. And Alex calls him out on it. He says, “Mindy was a thing. Tracy was a thing. This is not a thing. This is real and I can see it and I know.” It ends up bonding them when Alex loses (his wife) and I, ahem, magically disappear from the film.

Q: Speaking of which, I don’t feel like your character got a proper sendoff?

Nichols: Believe me, I talked to Rob (Cohen) about (my character’s fate) and he said, “People want something more.” And I said, “I want something more too.” It’s one of those things where you can only fit so much into the movie. I would have loved to have a moment at the end with Ed.

Q: You’ve got the leading role as a detective in a sci-fi TV series in Canada, which is coming to the U.S. What can you say about it?

Nichols: They haven’t made the official announcement about where it’s going to show up, but it premiered in Canada and did extremely well. We’re going to start season two, and I’m really excited because I love the show. It’s called “Continuum.”  It’ll probably start here in January.

Q: How is that experience for you? You’ve done TV before but you’re mostly known for your film roles.

Nichols: The pacing is different. The turnaround on the product is different. We shot this movie in two months for 90 minutes, roughly, and we shoot a 42-minute TV program, about half the length of a full-length feature, in eight days.

Nichols: We have days when we’re shooting 10-12 pages and I’m the lead on the show, so it’s go go go. We shoot in Vancouver and the show is set in Vancouver. I went up there in January and I didn’t come back here for a weekend until the show was done in May. We shot “Alex Cross” a year ago, and now “it’s coming out.

Q: It must be tough to be away from your family so much?

Nichols: It’s difficult to be away from your friends and people who hang out with. My parents are awesome, and my father just retired this year and I think he’s the happiest retired man ever because he and my mom are taking trips everywhere. But they’ve always come to visit me. They came to Vancouver and stayed with me for 10 days and they came to Prague when I was shooting “G.I. Joe.” They even came to Bulgaria when I was shooting “Conan,” which was amazing because it’s not necessarily a vacation destination but they came to see me.

Q: How are you able to juggle the TV show with the movies? You’re usually in action movies, and have probably been in more action movies than most guys.

Nichols: (She laughs.) It is doable because “Continuum” is only 13 episodes. We did 10 episodes the first season. All other seasons from here on out will be 13. We’re not like “Criminal Minds” where they do 22 or 24 episodes a season. It’s kind of the best of both worlds. For the first half of the year, I’ll be in Vancouver doing the show. When I was done, I executive produced this film with some friends that I also acted in called “Raise.” It’s like “Fight Club” meets “Gladiator” meets “Hostel” but it’s women. And it’s really killer. Then I went and did this little film in Philadelphia called “Mechanic” with David Morse. So ideally what happens is as soon as I finish the show, I’ve got a movie. I like to fill my time. So 13 episodes allows me to do one, two or three movies back to back, which right now that I’m young and vibrant I would like to do. I want to be on the move as much as I can until the point where I say, “OK, I want to take a break.”

Q: Would you like to do a romantic comedy?

Nichols: Absolutely. I would like to try and do everything, except sing. I’m tone-deaf. You don’t want me to sing. I’ll never be in a musical. Maybe if I could play an instrument or a really bad singer.

Q: When you have down time, is there something you’re into? Do you collect Hummels or like to go places?

Nichols: I try to go on one big trip in my down time, and this year I went to Costa Rica. I also like to go back east and visit my family. I love antiquing and so I’ve been known to go back east and ship things back here. I recently started taking golf lessons. It’s difficult and challenging but I really like it. I have a grandfather who’s 90 who plays nine holes of golf every day.  If I get good enough, I’m going to fly myself to Florida and play a round with him.

Q: With the holidays coming up, does your family celebrate certain traditions?

Nichols: December’s my mom’s month. And Christmas is her favorite holiday. My brother and I inherited her zest for the holidays. We weren’t allowed to sing Christmas carols until after Thanksgiving or put up the tree until after Thanksgiving and everything had to be taken down after New Year’s, but we still make cookies for our neighbors and my mom makes fudge every year. We do Christmas puzzles. And we always watch “The Grinch That Stole Christmas” on Christmas Eve. We cut down our own Christmas tree. So, yeah, I grew up with a bunch of traditions. They change as you get older. My brother’s 29 and I’m 32. But we still play a lot of Scrabble. We play by the rules. I have all the two letter words memorized, which is the bane of the existence of my opponents. It’s one of my favorite games. We always played educational games. The only video game we had when we were growing up was “Where in the World is Carmen Sandiego.” And that was educational. No “Angry Birds” for me.