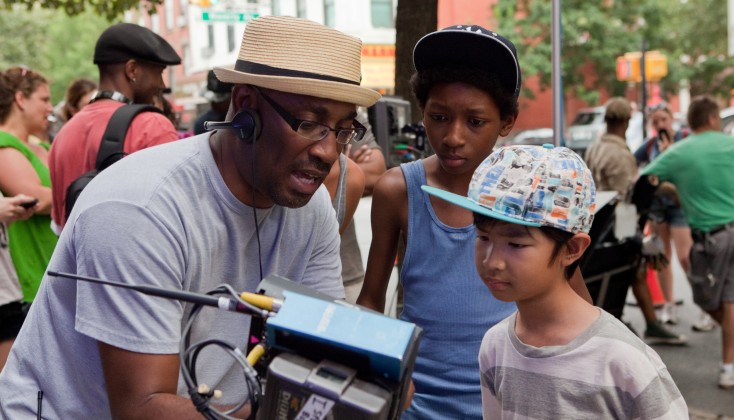 HOLLYWOOD—Child actors Ethan Dizon and Skylan Brooks may seem like old pros, having started in the entertainment industry at age 2 and 8, respectively. However, their upcoming roles in the Alicia Keys-produced and George Tillman Jr.-directed “The Inevitable Defeat of Mister and Pete” are considered to be breakout performances.

The drama was shot during a long hot summer in New York City’s projects. Thirteen-year-old Mister (Brooks) must deal with a drug-addicted mother (Oscar winner Jennifer Hudson) who is arrested leaving him alone to care for his mother’s friend’s 9-year-old son Pete (Dizon). As the duo become more like best friends, they must figure out where their next meal will come from. Beyond the fear of various dangerous characters roaming their neighborhood, the children also must evade Child Protective Services in order for Mister to make it to an open audition with the hopes of leaving New York for Beverly Hills.

A guardian angel arrives in the form of Alice (“American Idol” winner Jordin Sparks), a former neighbor, who agrees to help them get by until the audition.
During a recent press event at a Beverly Hills hotel, the Dizon and Brooks spoke about how they became good, friends, kissing Sparks and learning how actual disadvantaged youth survive through a character boot camp.

Brooks: We were friends from the start.

Dizon: We had two months to bond with each other over the filming.

Q: What was your favorite part of filming?

Brooks: Everything to me.

Dizon: My favorite part was being off set and chatting with each other after all the scenes.

Brooks: All the time. Everyday.

Q: How many takes did you have and how much fun was it with the scene of Sarah the hamster bowling?

Dizon: It was so much fun. But, you know that one scene is actually six or seven takes when the hamsters go boom into the wall. It looks like it’s going straight when it’s going all different ways.

Brooks: No. He was off on his own journey.

Q: How did you get into acting?

Dizon: I started when I was two years old in commercials. Then I got a recurring role in “How I Met Your Mother,” when I was six. Then I started doing other shows like “Sullivan and Son,” “Awkward” and “Grey’s Anatomy.” Now I’ve done three movies: this movie, “Bad Words” with Jason Bateman and “Get A Job” with Anna Kendrick and Bryan Cranston.

Brooks: I started when I was five and I really got into when I was eight. My mom took me to all these different kinds of workshop and my dad decided to further that with me. I started doing commercials and I’ve done movies like “Our Family Wedding” and student films. That’s how it started with me.

Q: What was it that made you want to be in this movie? How did you feel about all the cursing you have to do?

Brooks: I liked everything about it. Me and Mister had things in common. Acting. I think the wanting and the perseverance was what drew me to the character. There’s a lot of cursing with my character; more than my mom would want. My mom and me had a conversation with my dad about cursing. They decided for this film it was OK. So that was my only thing about that.

Dizon: When I read for Pete (I noticed) he’s kind of like me. He’s kind of shy and he asks a lot of questions. But he really just wants someone he can love and trust. He finds that in Mister.

Q: How was it like working with Jennifer Hudson?

Dizon: I didn’t get to work with her.

Brooks: (He laughs.) We talked quite a bit. It was more off set than on set because she was in her character. Jennifer was the powerhouse on set. She always had this demeanor and always in that character. I was afraid of her at first with that face and the way she was staring at me. (Imitating her) “Next line!” made me want to stay on top of things. She just set the bar for me.

Q: You have some really intense lines. How do you memorize that dialogue?

Brooks: I ask myself the same thing. “How did I do that?”

Q: There are some veteran actors that can’t deliver that consistency.

Brooks: For me, it was a lot of practice. It was just sitting all day (reading) scripts. It was homework and scripts. I would have to balance out the time. And definitely throughout the whole boot camp—me and Ethan went through boot camp for the film—our coach would help us with everything except homework. The connection with the words and Mister just helped me further with the progression in learning lines. It (was about) really sticking to it and feeling the words and what they meant.

Q: During the boot camp, did you bond with the kids from the Ingersoll community and get a bit close to them?

Brooks: Yeah. We got to meet kids that actually went through things with the drug addiction. Before we went to New York, we went got a chance to go to another facility out here, Homeboy Industries.

Dizon: We met with Fabian. He was the drug counselor of Homeboy Industries and (he told us) his story about how his dad did drugs and how it affected his whole family.

Brooks: He showed us how he connected to art to get away from that struggle of addiction.

Q: What lessons did you learn from the kids and that there are kids that go through the same situations as your characters?

Dizon: I learned that I need to be more grateful for what I have because not all kids are as fortunate as us.

Brooks: Yes, that’s the big thing that came out of it, for me, was to be grateful for what I have now and for when I do get bigger things, I need to be thankful for what I get.

Q: What was one of the things you learned from George (Tillman Jr.)?

Brooks: For me, it was so many things he told us.

Dizon: George told us this is our movie. If we felt like we didn’t like our takes, just tell him. Also, when I grow up, I want to be a director like him.

Q: You’re going in that direction?

Dizon: Yeah. I make my own movies of my brothers. I have my brothers in it.

Q: When you cast your brothers, do they follow your directions?

Q: There are heavy moments in the movie, what was the most challenging for you?

Brooks: I speak in a lot of scenes. In one scene, I’d have a lot of emotions. If I have to pick a hardest—it was a scene that didn’t make it into the film is where I’m in a library and Alice (Sparks’ character) actually dies.

Dizon: They revised it.

Brooks: Yeah they revised it. I’m in the library bawling tears. Why did she have to go that route?

Dizon: For me, it’s when I see my mom. That’s the hardest scene for me. We practiced that scene. The writer, Michael Starrbury, actually wrote a little part for that backstory of Pete. I did that with the actor that plays my mom. That was quite intense.

Q: How difficult was it for you to act, knowing that you had a crush on Jordin Sparks?

Brooks: It wasn’t hard. After a while, it got easier. When I first met her, George had us go to the apartment where we were shooting our home scene. We had to go to this room and Ethan was sitting in the living room. George brought me into another room and me and Jordin had to have this little chemistry thing. I was quite scared and nervous. Then I got way nervous when had to do the scene. Weeks later and it’s getting close to the end of the movie and almost done and I’m going to freak out.

Dizon: It’s cool how he says, “I gotta take a mint before I do the scene.”

Q: How many takes did you do for the kiss?
Dizon: First of all, I can say for him, even when they got the right take, George was like “You want to do that again?”