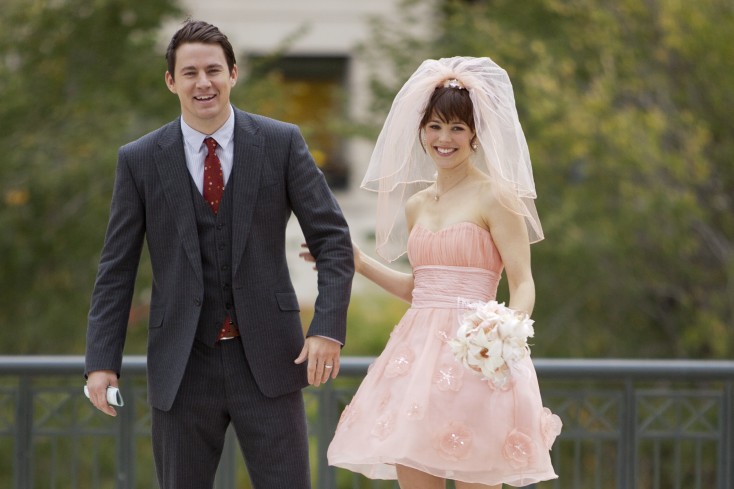 HOLLYWOOD—The Chinese calendar may indicate this is the Year of Dragon, but in Hollywood it also could be considered the Year of the Chan. Channing Tatum, that is. The ruggedly handsome Alabama native has no fewer than five films scheduled for release this year.

Tatum insists this phenomenon is purely coincidental. Two of the films were supposed to come out last year but were pushed back for various reasons. Chances are if you are in a Cineplex anytime soon, you’re likely to see Tatum’s mug—and possibly his backside—up on the screen.

He can be seen with mixed martial arts expert Gina Carano making her feature film debut in Steven Soderbergh’s “Haywire.” Just in time for Valentine’s Day, he stars opposite Rachel McAdams in the romantic drama “The Vow,” in which he plays a devoted husband coping with his wife’s amnesia following a car accident. (Word of advice: Bring your Kleenex.) He also reprises his soldier role in “G.I. Joe: Retaliation,” plays a stripper in “Magic Mike” and goes for laughs in the police comedy “21 Jump Street.”

Front Row Features: Your character in “The Vow” is a dream, almost flawless. Was it tough playing someone so perfect and understanding?

Tatum: You should have read the script before the director (Michael Sucsy) and I got a hold of it. My character was like Yoda; you couldn’t crack him or get him mad. He so understood. It was almost like he didn’t have a backbone.  Michael and I got into it, and he wrote a really good draft.

Front Row Features: You had a big hit a few years back with the Nicholas Sparks drama “Dear John.” Did you make this film to satisfy your female fans?

Tatum: I don’t make decisions on the movies I make for anyone else but myself. I don’t feel like if I do something for someone else I’ll be able to do it well. (I don’t say), “I’ve done a big action movie this year so I should probably do something that’s smaller and more intimate.” I don’t think you can make movies like that.

Front Row Features: How is “The Vow” different from “Dear John?”

Tatum: I really just loved the idea of (my character) Leo in an extraordinary circumstance with his lover, Paige (McAdams), and then, it doesn’t take a stereotypical Nicholas Sparks way to get back around to love. I don’t want to give the movie away but there’s no “aha” moment where everything sort of falls back into place. It’s a real life way to get back into things.

Front Row Features: Did you have a chance to talk to Kim and Krickitt Carpenter, the real life couple that wrote the book that inspired the screenplay?

Tatum: Michael (Sucsy) guided me away from reading the book or trying to get any amount of detail of who they were because we took some liberties with their story. They were more extraordinary than our characters, because they stayed together throughout (Kim’s amnesia). I don’t know how you do that in reality. I don’t know if I’d have been able to do that. It had a lot to do with their faith. They’re very religious and I think they were like “OK. It’s fine.” I was nervous to meet the guy. Really nervous. He was an extraordinary person.

Front Row Features: How did you like working with Rachel?

Tatum: She’s lovely, and I think you can tell that. She’s just a sweetie and I think she that comes through in a lot of her characters – that sweetness.

Front Row Features: Did you have a chemistry check before getting cast?

Tatum: No. The movie came around my way and they hadn’t found Paige yet. It’s a hard character, that character. And to play it honestly, it’s a tightrope to walk

Front Row Features: There’s a scene where the audience sees your derriere. Did you know you’d have to expose some flesh in this film?

Tatum: I knew I was going to have to walk in naked so I asked them to give me a very long, er, thing, to give her a good reaction, and it was pretty hilarious.

Front Row Features: So you enhanced your member for her benefit?

Tatum: Yes, I was trying to make her better in the scene. (He laughs.) It’s the take they used; I will tell you that.

Front Row Features: I’ll bet it was good practice for your next movie, “Magic Mike” (about a male stripper).

Tatum: Yes, there will be somebody in there wearing a prosthetic.

Front Row Features: Was it interesting revisiting that period of your life?

Tatum: Yeah, it was pretty weird.  Going down to Tampa, we did all the exteriors there. It’s not my story. There is no one called Chan in the movie so it’s not my story. It’s just the world of all these crazy guys and how that world can swallow you up and take you away. But it was really weird to go back to the same streets where I was living in government housing and to work in the club that I worked at for $75 a night, dancing on this stage with a bunch of my buddies. It was a pretty weird moment for sure.

Front Row Features: How are you feeling about your career now?

Tatum: For the past two years, me and my business partner, Reid (Carolin), have talked about the movies we want to see and be more involved in what we do. In the first year we had our first producing project, “Ten Year,” which will be out this year and it turned out good for a $3 million movie, a first time director and 15 up-and-coming actors.  It was a crazy experience and we learned a lot from that. You can go to an acting class and learn to act but there is no class to learn how to produce a movie. You just have to do it. We learned from watching the Coen Brothers, (Steven) Soderbergh—these guys don’t stop making movies. I want to be more involved in the behind-the-scenes of making movies, as this will take me to the next level of acting for me.

Front Row Features: Do you have a dream project with your wife, Jenna (Dewan)?

Tatum: We would love to do another dance movie together. Maybe we will reboot “Step Up.”

Front Row Features: What did you and Rachel do during your time off while shooting in Toronto?

Front Row Features: Did you fall down?

Front Row Features: At one point your character strips down with Rachel’s character and they go swimming in the lake at night? Did you have any concerns about jumping in the water?

Tatum: I didn’t care. I do that all the time. That’s my thing. I go to every city and get down to my underwear and go to the nearest body of water. (He laughs.) The water wasn’t cold actually. It was the first time in my career that that’s happened.

Front Row Features: This is a huge year for you. What does it feel like?

Tatum: I had no intention of having five movies coming out. But those are high-class problems. I’m very proud of all the films. They’re all very different. If they were all sort of the same, I’d be freaking out.

Front Row Features: Can you talk about “21 Jump Street?”

Tatum: When (producer and co-star) Jonah (Hill) called me about being in it, I was like “You’re going to have to take care of me on this.” And he was like “I’ve got you.” And I was like, “Alright, I’m in.” I put my faith in people I admire and love, and want to learn from them. Believe me when I tell you it’s one of the most fun things I’ve ever done. It’s an entirely different style of acting for me. Even the first week, I was like, “I don’t know if I can even do this. This is so weird. This is so strange.” Jonah will stop in the middle of a take and just take one line a bunch of different ways and they’re funny every time. I’ve never done that. That’d be so weird to do. But it works with comedy.