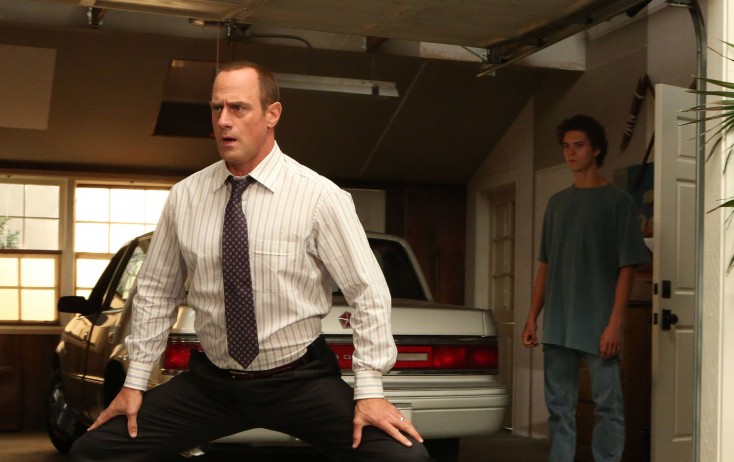 HOLLYWOOD—For 12 seasons, Christopher Meloni played NYPD detective Elliot Stabler on “Law & Order: Special Victims Unit.” Then his character abruptly resigned—offscreen—in the 13th season premiere. The official story was that Meloni left the show over a contract dispute with the producers.

After a three-year absence, the Washington, D.C. native is back on the small screen in the Fox comedy “Surviving Jack,” in the titular role as a tough-as-nails stay-at-home dad in the 1990s. The series premiered Thursday, March 27, and has garnered positive reviews.

The 53-year-old veteran actor also stars on the big screen in the dramedy “Small Time,” in which he plays a divorced used car salesman, who encourages his slacker teenage son (Devon Bostick) to work one summer on the lot with him and his longtime business partner (played by “Breaking Bad’s” Dean Norris), in hopes of sparking a sense of responsibility in the kid. But the veteran salesman’s remarried ex-wife (Bridget Moynahan) isn’t sold on the idea, because she wants her son to finish school and go to college so he can become a financial success like his stepfather. Based loosely on writer/director Joel Surnow’s own experience with his salesman father, “Small Time” is a story about how following one’s own path is more important than simply accumulating wealth.

Meloni recently spoke about his new movie, working with co-star Norris and his new TV series.

Q: What research was involved in playing a used car salesman?

Meloni: I read a couple of books on car salesmen and their tricks of the trade. My brother-in-law is, in fact, a “slasher” (job title for highly aggressive temporary sales person who comes in and sells cars over a short period), and my sister-in-law worked for him.

Q: Did you visit any used car lots?

Meloni: I actually went to two used car lots just to get their shtick… as a customer. I didn’t say, “Hey, how are you?” I went there saying, “Yeah. I’m interested in buying a car.” I just wanted to hear them talk and (find out) what their game was. It was kind of interesting.

Q: Did they sell you one?

Meloni: No, I wasn’t in the market.

Q: Did they use any of the tactics your character uses in the film?

Meloni: No. One guy, I thought of him as a pusher. Almost physically, with his energy, pushing me towards—anytime I went towards something that cost less money—he never let on whom he thought I was—he’d almost physically push me towards the bigger price-tagged stuff. It was fascinating how he did that. He was like a sheepdog, pushing the sheep toward the money pit. The other guy wasn’t quite as interesting. He was more lackadaisical in his (approach). That, I thought, was the ultra soft sell. They’re never not there for a reason, for a purpose. It’s like good acting: What’s your super objective—to get me to open up my wallet and buy the car.

Q: How did you get cast in this film?

Meloni: It was one of the better scripts that I’d read. I liked the sensibility of it. I thought it was a little bit of a throwback. I thought it was a quite, soft, funny, introspective movie. I guess I felt as though that diet is lacking on our viewing plate these days.

Q: You’re a successful Hollywood actor so you don’t need to buy used cars. What did you spend your first big paycheck on?

Meloni: (joking) A used car lot. No, I bought a lake house. I taught myself how to water-ski.

Q: Was there something you were looking forward to bringing to the character that wasn’t in the script?

Meloni: No, but I’ll say this, when I read the script, I had some notes. I had some questions for Joel (Surnow, the writer/director), and I went to meet him. To his credit, he said, “That’s a great question. I don’t know the answer. Let’s…” So I thought this is a guy who isn’t locked down to anything. He was very open to a collaborative spirit, and so I thought it worked out well.

Q: How was it working with your co-star Dean Norris?

Q: Are you guys old friends or how did you build the chemistry?

Meloni: He came in and was obviously highly intelligent, a curious actor. He was curious in his character, these moments, our relationship, so immediately I understood we had a common language. He’s a very funny guy and it goes back to kindergarten. He works and plays well with others. (He chuckles.) And it was a playful relationship, a playful spirit. Two guys grounded in having known each other a long time and trusting each other with our lives. If you can check egos at the door and understand it’s not just about you, but a canvas with you and a bunch of people, then it works. That’s how it worked out. Everyone’s in this together and it was really nice. I trusted him and I believe he trusted me.

Q: There’s a hilarious TV spot you do in character during the end credits. Did you ever do a silly commercial early in your career?

Meloni: Yeah, doing commercials got me out of the bars. (He laughs.) I don’t mean drinking; I mean as a bouncer and a bartender. I made my living for almost two years doing that.

Q: Did you get a national commercial?

Meloni: Gobs of them. I was “the guy out of New York” for about a year and a half—American Express, Stroh’s, Burger King. Remember Spike the dog? I did that. I was doing all this shtick.

Q: This film is set in the ‘70s. Did you have a favorite car from the film?

Q: Ten years from now when you look back, what will you remember about this project?

Meloni: It was the scenes with my son. As an actor, to get a scene that resonates emotionally with you, it was just fantastic. I really enjoyed those scenes a lot.

Q: Did you ever go to work with your father or what was your best experience with him?

Meloni: My dad was a doctor so I never saw him at work. But my fondest memory of him was throwing a football with me. That was it.

Q: Congratulations on your new TV series. Is it exciting getting back on TV?