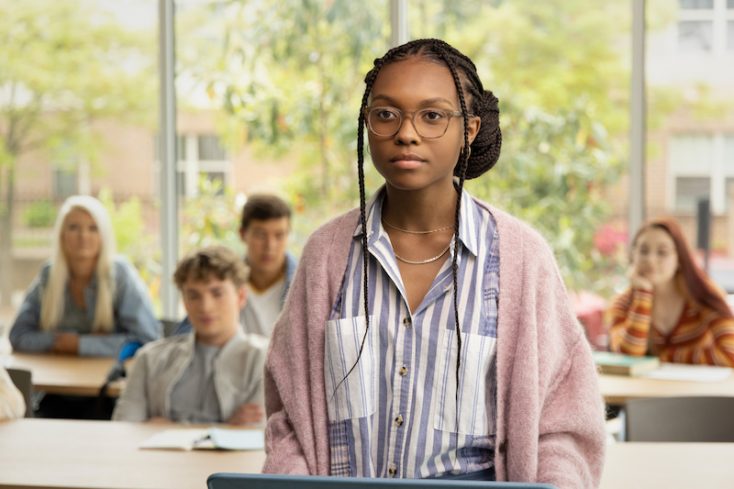 HOLLYWOOD—Based on the comic book of the same name by Brian Michael Bendis and David F. Walker, The CW’s “Naomi” follows a comic book-loving teenager portrayed by Kaci Walfall (“Power,” “The Lion King” on Broadway.) When a supernatural event occurs in her hometown of Port Oswego, Naomi, along with her school friends, begins to investigate what really happened, leading her to discover her own destiny in the superhero universe.

Written and executive produced by Ava DuVernay (“Selma,” “When They See Us”) and Jill Blankenship (“Arrow”), “Naomi” premieres on Tuesday, Jan. 11, at 9 p.m.

DuVernay and Walfall spoke “virtually” with the TV Critics Association about their new series.

Q: Ava, can you talk about where this idea to develop the series came from and your experience with the comics before you took on this project?

Ava DuVernay: I was attached to a film called “New Gods.” So I was already kind of in the DC universe working on that. I was looking for more in the DC world when I heard about a new book that was about to drop and it was a Black girl superhero.

When I heard the origin story, I said this must be mine because it was different than most fully-formed superheroes where we just dive into the comic and she’s who she is. This was really the step to becoming yourself, to realizing your destiny that takes [you to becoming] who you’re meant to be. That’s something that was very interesting to me. So I grabbed Jill Blankenship who has to be [one of the] top two best writing partners I’ve ever had. She and I together started working on it.

Q: The first two episodes cover a lot of the comic. Does that mean we’re going to see a lot more stories out of this?

DuVernay: We got a lot of information in the first two episodes, which means we get to make up new, cool things. So yes, that’s exactly what’s happening.

Q: What made Kaci right for this role?

DuVernay: When I’m casting, the talent’s easy to find. The hard part is, do I want to be in a relationship with this person for potentially many years? And so that’s why, after [Kaci’s] audition, when I was like, this girl is flat out incredible, [I flew her] out here. Kaci was 16 at the time, has that theater experience, the work ethic, the professionalism, the talent, vibrancy and the charisma. But then you sit down with her and you’re like, “Oh, you’re a great person.” [When] you get lucky magic happens and she’s our magic.

Q: Kaci, were you a fan of this comic book or of comic books in general before you got this role?

Kaci Walfall: I’m an avid reader, but I hadn’t read comic books before the show. However, I was a big fan of the DC shows. I watched “Supergirl” religiously and I’ve watched “The Flash.”

Q: Since Naomi is just discovering her powers, does that give you a chance to ease into it with the training?

Walfall: It does allow me to ease into it. As she’s finding out, I’m finding out, which is really helpful as an actor. It allows me to grow and the character to grow. Our stunt coordinator, Elizabeth, often says I’m at the right place where the character is. I work out so that I can stay fit, but also (to) maintain energy. It’s really helpful because as the series goes on, she’s figuring out things and she gets better and better every episode.

To a certain extent, the show’s grounded in reality in a sense through the circumstances. I do genuinely ask myself, what would I do if I found out I had powers? Would I be … maybe not joyful? And I think that I bring that into the character because, as the show goes on, you see that maybe you finding you’re a superhero is not something that you’re completely enthusiastic (about). It makes you different, and you already feel different.

Q: Did you know what Naomi’s superpowers would be or was it better not to know because it’s part of your journey?

Walfall: When I first auditioned, there weren’t talks about her superpowers. So I was really intrigued about that, knowing that it is in the superhero genre. I remember first sitting down with Miss Ava in LA. She started talking and teasing them to me. [Then] I read the comics and you can see the powers that she has.

Q: Ava, this is a show that has sci-fi elements and it’s a coming-of-age story. When you talk about it, which do you emphasize?

DuVernay: I think of it as a coming-of-age story first. I love that all comics are really personal human stories about the journeys that we all take, written with issues of heroism and magic.

Q: Are you going to be doing any crossovers with other CW, DC characters?

DuVernay: We’re not thinking about that right now. She’s on her own path. I really think that this is the first part of the “Naomi”-verse. We will see what happens. But we are really just focused (on “Naomi”). You won’t see any crossover Season 1, that’s a little spoiler. She is firmly in her story and we are singularly focused on that journey.