HOLLYWOOD—Sara Paxton is becoming the new Hollywood scream queen. The 23-year-old actress has appeared in such recent horror flicks including 2009’s remake “The Last House on the Left” and last year’s “Shark Night 3D.” She now stars as Claire, a twentysomething amateur ghost hunter who gets more than she bargained for while staking out an old New England hotel with her best friend and co-worker in Ti West’s “The Innkeepers.”

West was inspired to write the supernatural thriller while staying at the historic hotel in Torrington, Conn., during shooting of “The House of the Devil” in 2008.  He and some of the other cast and crew members staying there insist they witnessed paranormal activities, like ringing phones with no callers on the other end of the line, slamming doors while windows were closed and other weird happenings during their two-month stay.

When the script was ready to go, he cast Paxton, who was recommended to him through a mutual friend. The Southern California native didn’t have a lot of time to rehearse with co-stars Pat Healy and Kelly McGillis, once she got the role. She found herself onboard a plane to Connecticut to stay and work in the hotel (The Yankee Pedlar Inn) where the film was shot. The perky blond who bears a striking resemblance to Reese Witherspoon recently discussed her latest role and why she doesn’t spook easily.

Front Row Features: Tell me how you got this role.

Paxton: I was working on another movie and Ti and I had a mutual friend in that other movie. We happened to be out and about running errands between filming, and my friend was on her phone.  She said, “My friend Ti West is texting me about you. He wrote a script. Do you know his work?” And I said, “no.” But I read the script and I really liked it a lot. We met in L.A. and got along. I left on a Saturday and we started working on Sunday morning. There was no rehearsal. It was like, “nice to meet you, Pat. Let’s act.” Pat and I just got along right away.

Front Row Features: Was it weird working and living in the hotel at the same time? Did you get a strange vibe at the hotel?

Paxton: Yes. It was built in the 1800s, and had a bad renovation in the 1970s. I walked in my room and it was a gross-barf pink color. In the middle of the night, my door would violently fly open. My phone would ring and no one would be on the other end. I didn’t want to pull a Claire, and start freaking out so I’d be like, “Oh, it’s the wind. It’s nothing.”  But I liked it. I enjoyed every moment of it. I never started to feel loony or anything.

Front Row Features: Did you relate to Claire in some way?

Paxton: Yes, definitely. Claire is me. She’s the closest to myself that I’ve ever played. She’s is a part of myself where I turned the volume up a little bit.

Front Row Features: She seems a bit lost about what to do with her life. Have you ever felt that way?

Paxton: Even though I’m an actress and I have never had a real job because I’ve been acting since I was six, I think every person has had that moment in their life where they wonder, am I doing the right thing. Should I go back to school? She’s in a dead end job. Because there’s something lacking in her real life, she’s like, “Yeah, I’m going to go full force into this.”

Front Row Features: How did you like working with Kelly McGillis?

Paxton: I liked working with Kelly a lot. It was great for me because Kelly came in the second week, so the rest of us already were best friends. She’s an established actress and everyone (on the set) was a “Top Gun” fan, though we didn’t talk about it. She made me nervous, so that worked for the movie because my character initially is nervous around her. Eventually, we became friends.

Front Row Features: What did you make of Ti?

Paxton: Ti’s one of the best directors I’ve ever worked with. He’s so young to be this good. What I like about him is that he knows what he wants. He has it all in his head, and he just does it, and when he gets the shot he wants, we move on. We aren’t beating a dead horse or anything. That makes my job easier because he knows what he wants. He knows how to communicate with the actors really well.

Front Row Features: Did he go over each scene with you beforehand?

Paxton: He hired people that knew what they were doing. I understood the script, the character and the tone of the movie. I don’t think he would have hired me if I didn’t. I compared (Claire to “Seinfeld’s” neurotic) George Costanza. I was always freaking out like George Costanza. So between takes he would say, “Go more Costanza,” which meant pump up the goofiness. So when he said that, I knew and I needed to do more. Or he’d say, “Tone down the Costanza,” and I knew what he meant.

Front Row Features: Would you take the chances Claire takes in a haunted hotel?

Paxton: I don’t know. Probably not, because I’ve done enough of these movies to know you’re going to die if you’re not careful. (She laughs.) But there wouldn’t be a story if she (wasn’t curious.) The ending is purposely ambiguous. We want the audience to talk about it afterwards.

Front Row Features: How did you like the look of your character?

Paxton: The best part of my job was that I got to wake up and walk downstairs and put on the same outfit every day. I hate doing hair and makeup for three hours.

Front Row Features: This is your third horror movie. Do you like this genre?

Paxton: Yes. I don’t take myself that seriously. I did “Last House on the Left” because I wanted to break away from doing cute comedies. Now that I’ve done “Last House on the Left,” people don’t know I’m funny. People are so forgetful. These are just opportunities that have been presented to me in the past couple of years and I’m OK with it. Surprisingly, there aren’t a lot of opportunities for women my age in Hollywood. I have enjoyed being able to run around, scream and cry and act out and do stuff. I’m glad I’ve had an opportunity to play these kinds of roles. I like other genres. I’d like to do a romantic comedy next but I’m always just looking for different roles and something unique. I took something different out of each of the (horror) roles.

Front Row Features: You started out as a child actress on “Summerland.” When did you know you wanted to make acting your career?

Paxton: When I was younger, I just thought about it as a hobby. I never thought it was going to go this far. It was something I did once in a while. I wasn’t good at anything else. Then I started getting into it. I was on a roll when I was 15 or 16. I had a TV show (Discovery Kids’ “Darcy’s Wild Life”). I was doing the lead in a movie called “Aquamarine.” It was very exciting. I got into it. Then, when I was 17 and I was senior in high school, I really wanted to go to prom and I wanted to go to college. I wanted to be a veterinarian. That was always my goal. I was like, “I have to make a choice here because I’m about to be an adult,” so I took a year off to figure that out. In the year off, I realized this is what I’m meant to do. This is what I love. Without it, I’m lost. So I went full steam ahead and I never looked back.

Front Row Features: Did you have a normal childhood?

Paxton: I had a really good childhood. It’s made me who I am today. When I was a kid acting, I was doing two commercials a year. My mom’s a dentist and my father manages a practice. They weren’t living off me. I have a really big family and they’re very old-fashioned. They would never let me get a big head about anything. I still have the same group of friends that I had since I was eight. It’s kept me grounded. 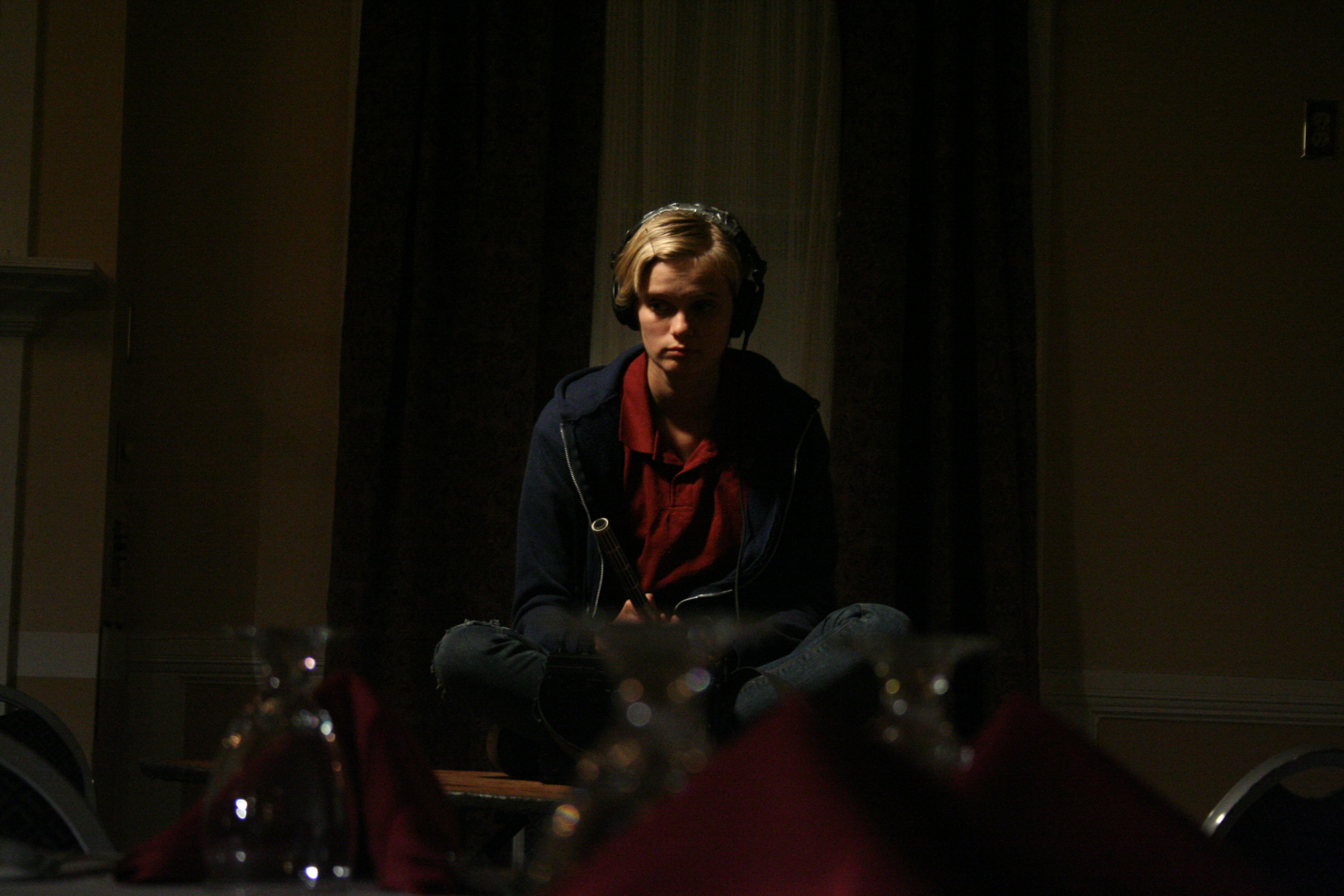