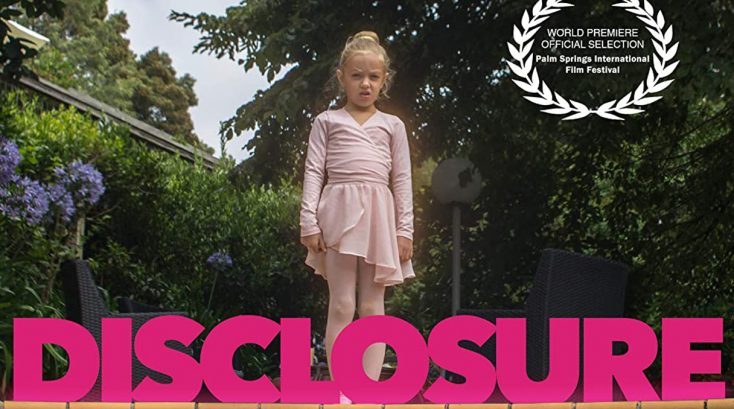 “Belzebuth” stars Joaquín Cosio (“Narcos: Mexico,” “The Lone Ranger”), Tobin Bell (“Saw franchise) and Tate Ellington (“Sinister 2”). Special Agent Emanuel Ritter leads a police investigation into a series of shocking deaths. But after a priest from the Vatican finds a link between the murders and an ancient demon, a descent into horror ensues.

The Australian drama “Disclosure” arrives on DVD Tuesday July 7, from Breaking Glass Pictures. It also is available now On Demand.

From writer/director Michael Bentham, the film that hammers home the notion that “there are two sides to every story, and then there is the truth.” “Disclosure” follows two couples who go to war over an allegation of child-on-child abuse. Australian documentary maker Emily, and her journalist husband, Danny, are reeling from an allegation of abuse their 4-year-old daughter Natasha has made against a local politician’s 9-year-old son, Ethan. Ethan’s parents, Joel and Bek, arrive unannounced at Emily and Danny’s house intent on convincing the couple that Natasha’s allegation is a fabrication. Accusations, arguments, and the ultimate search for leverage turn their civil conversation into a vicious confrontation.

The story of endurance of the Iraqi Olympic boxing team is the subject of the documentary, “Hands of God,” available on DVD and Digital Tuesday July 7, from Film Movement.

The team endured 13 years of war, dozens of bombings each and every month, but their focus was on one goal—to become Olympic champions.

From executive producer Alfonso Cuarón (“Roma,” “Gravity”) and director Riccardo Romani, “Hands of God,” tells the story of the team’s amazing journey from desperation to the edge of an historic qualification. The film follows a group of young men—Waheed, Jafaar, and Saadi—who, with grit and determination, rise to fight for their nation while defending their lives on the battlefields. When their gym is devastated by a bomb attack, they train outside. Despite living under the persistent threat of ISIS, these men re-define commitment and sacrifice as they strive to accomplish their dreams.

Private Waheed struggles to find enough time for training while undertaking his army duty. Meanwhile, Jafaar maintain his focus while living in the most dangerous suburb in the world. And promising heavyweight Saadi hopes to return from his mission to liberate Falluja in order to compete. From Al Sadr City to Rio de Janeiro, “Hands of God” is a stunning tale of hope and redemption.

“The High Note,” starring Tracee Ellis Ross, Dakota Johnson, and Ice Cube, will be available to own on digital Tuesday July 7 and on Blu-ray/DVD on August 11. The film was released on PVOD last month to rent since theaters have been closed due to the COVID-19 pandemic. “The High Note” follows a superstar singer (Ross, who shows off her own vocals for the original songs in the film) and her personal assistant (Johnson) as they both aspire for more despite the industry trying to keep them in place. Extras include deleted scenes, two featurettes (“The Dream Team: Inside the Creation of ‘The High Note’” and “Making a Legend: The Grace Davis Story”) and the “Like I Do” original song music video.

Arriving on DVD Tuesday July 7 is “Hope Gap,” a drama written and directed by William Nicholson from Screen Media.

An intimate, intense and loving story, “Hope Gap” charts the life of Grace (Academy Award nominee Annette Bening), who is shocked to learn her husband (Bill Nighy) is leaving her for another after 29 years of marriage. The split results in an emotional fallout on their only grown son (Josh O’Connor). Unraveled and feeling displaced in her small seaside town, Grace ultimately regains her footing and discovers a new, powerful voice.

Inmate #1: The Rise of Danny Trejo

The powerful documentary “Inmate #1: The Rise of Danny Trejo” pays homage to Danny Trejo’s heritage—his Mexican roots and his Los Angeles upbringing—as he gives fans a first-hand look into the extraordinary life journey that molded him into Hollywood’s most unlikely hero. The film will be available on digital in the U.S Tuesday July 7, giving viewers a raw and inspirational account of Trejo’s unbelievable transformation from hardened criminal to celebrated movie icon and beloved friend of all who cross his path.

From a life of hard drugs and armed robberies to Hollywood red carpets and mentoring addicts, this is the telling of one of the most radical and uplifting transformation stories of human character ever put to film. Directed by award-winning filmmaker, Brett Harvey (“Ice Guardians”), “Inmate #1: The Rise of Danny Trejo” is the shocking story of one man’s capacity to overcome his demons and discover redemption through the most unlikely of journeys.

With a host of celebrity interviews, never-before-seen footage and personal testimony from Trejo and his closest family and friends, audiences will witness the birth of a Hollywood icon who became a symbol of hope to the people he grew up with and fans around the world. After 46 years of sobriety, he never forgets his roots and is genuinely happy to pay it forward every single day. Trejo has made it his personal mission and debt to society to give back to Chicano communities in Los Angeles through his volunteer work donating food via his iconic Los Angeles based restaurants, buying toys for local children, motivational speaking in prisons, working with animal shelters and being a source of consistent support for those in the neighborhood he was raised in.

Queen Poppy (Anna Kendrick), Branch (Justin Timberlake), and the rest of your favorite Trolls are back for another musical adventure that’s bigger—and louder—than ever before. Poppy and Branch discover that their kingdom is only one of six musical realms—Funk, Country, Techno, Classical, Pop, and Rock—that were once united in perfect harmony. When the power-hungry ruler of the Rocker Trolls threatens to silence all other music so her tribe can reign supreme, Poppy and Branch must embark on an epic quest to unite the realms of Trollskind, before the songs in their hearts are lost forever. The animated feature is currently available for early viewing on a wide variety of popular on-demand services as a premium rental offering.

“Trolls World Tour: Dance Party Edition” includes an interactive dance party mode where viewers are introduced to dance moves to learn while they watch the film, lyrics to sing along, and surprises featuring their favorite characters. There is bonus content, such as an exclusive original short film starring the unforgettable Tiny Diamond, deleted scenes and behind-the-scenes exclusives with the power-house musical cast of Anna Kendrick, Justin Timberlake, Kelly Clarkson, Mary J. Blige, George Clinton and many more.

War of the Worlds

A mysterious, meteor-like object has landed in a small California town. All clocks have stopped. A fleet of glowing green UFOs hovers menacingly over the entire globe. The Martian invasion of Earth has begun, and it seems that nothing-neither military might nor the scientific know-how of nuclear physicist Dr. Clayton Forrester (Gene Barry)-can stop it. In the expert hands of genre specialists George Pal and Byron Haskin, H. G. Wells’ end-of-civilization classic receives a chilling Cold War-era update, complete with hallucinatory Technicolor and visionary, Oscar-winning special effects. Emblazoned with iconographic images of 1950s science fiction, The War of the Worlds is both an influential triumph of visual imagination and a still-disquieting document of the wonder and terror of the atomic age. The film starred Gene Barry and Ann Robinson in this Technicolor classic. (“War of the Worlds” also won an Academy Award for best visual effects.)

Extras include a new 4K digital restoration, with uncompressed monaural soundtrack on the Blu-ray, audio commentary from 2005 featuring filmmaker Joe Dante, film historian Bob Burns and author Bill Warren, an audio interview with producer George Pal from 1970, “The Sky Is Falling,” a 2005 documentary about the making of the film, Radio program from 1940 featuring a discussion between Orson Welles and H. G. Wells, author of the 1897 novel “The War of the Worlds,” and more.

Armed with gadgets and gizmos a plenty, Detective William Murdoch (Yannick Bisson) and his associates solve 18 cases across the many stratums and evolving manners of Victorian society. Set in the late 19th century in Toronto, the methodical and dashing Detective Murdoch enlists radical new forensic techniques like fingerprinting, ultraviolet light, and trace evidence to solve some of the city’s most gruesome murders. This five-disc DVD or four-disc Blu-ray set ($59.99, Amazon.com) includes the special 200th episode and Q&A with Yannick Bisson and Daniel Maslany (Detective Llewellyn Watts on the show). Season 13 of “Murdoch Mysteries” previously premiered on Acorn TV in December.

Season 13 follows Murdoch as he continues his deft detective work with new innovations, including a “searchizer” device that measures facial features and matches them with existing police files. Unfortunately, he is still rattled by suspicions about Violet Hart’s (Shanice Banton) appointment to coroner. The station also sees a new addition with Special Constable Robert Parker (Marc Senior), an African American former Pinkerton who went from suspect in a union murder to helping solve the case. Meanwhile Dr. Julie Ogden (Hélène Joy) is happily settled into her role as a full-time surgeon at Toronto Mercy Hospital but is surprised by the attentions of her colleague Dr. Andrew Dixon (Sebastian Pigott).